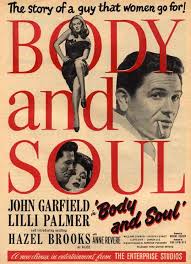 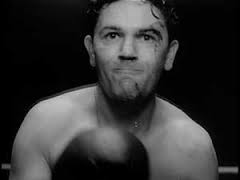 An okay boxing movie that uses a lot of death to get our attention, but doesn’t have a whole lot going on other than that.

This is the first boxing movie ever made and as such, it’s pretty cool that they were able to figure out how to get a camera into the ring and show the fight scenes up close. Aside from that, there’s also a pretty interesting story to go with it, about greed and corruption and selling out. The problem is we really don’t start to get into those themes until about halfway through the movie. it’s with the introduction of an evil promoter who becomes the villain of the movie that things start to get entertaining. before that, the movie is kind of dull and slow-moving. The good news is that the movie does get better as it goes on. the bad news is that it takes quite a while before things really start picking up.

Body and Soul is an okay movie by today’s standards that was considered great at its time. That time was 1947, and the reason it was so well liked is because it was the first movie to do certain things. Specifically, it was the first movie about boxing, with a camera that got into the ring and showed the action up close. This is no raging bull or rocky, but when there was nothing else to compare the boxing scenes to, it must have seemed revolutionary. The story isn’t half-bad either.

The plot follows this young man, Charlie Davis, who has some fighting skills. He lives with his parents and has a best friend named Shorty. The movie opens with a punching bag hanging by itself in a deserted yard at nighttime, and then moves over to a tree and to the garage beside it, where Charlie sleeps. He mumbles a name in his sleep, (citizen Kane, anyone?) and then we cut back to about ten years earlier to see what happened to him and who this name he has been mumbling and having nightmares about, belongs to.

The method of starting a movie off in the future and then cutting back to show the events that led up to it was pretty big at this time. It’s still used often today, but back then, it was overused. Sometimes it was for the better (double indemnity), but other times it gave things away that would have had a greater impact if left for a surprise (sunset boulevard.) here, the flashback method and starting the movie out in the future is fine, but the name he calls out turns out to not be as important to the story as one might have thought.

Young Charlie wants to go into fighting. He needs equipment to start training and practice and get in shape. His mother refuses to give him money for it. His father goes behind her back and gives Charlie the money, telling him that his mother doesn’t need to know about it. Not long after that, his father is killed. This is the first of many deaths that will occur in the movie, but this one in particular, coming so quickly after his father gave him the money, is pretty symbolic. The father helped lead Charlie on the path to corruption and was immediately killed for it. Unfortunately, it’s too late for Charlie to turn back off the path.

Charlie goes on to win fight after fight with his friend, Shorty; they’re at his side. He also meets a nice, supportive woman who falls for him pretty hard and wants to marry him. This is peg, a gentle girl who becomes very close with Charlie’s mother. The fighting begins to dominate Charlie’s life and he gets a promoter named Quinn who starts getting Charlie involved in bigger and bigger fights.

As Charlie gets bigger and wins more fights, he gets more offers. Soon he has a new promoter who is more corrupt than he is moral. This guy tries to get Charlie to cut Shorty out of the take, and succeeds to the point where whatever money Shorty takes in is coming directly out of Charlie’s share. The promoter gets Charlie to do things and take fights that he normally wouldn’t. Sometimes he knows the detail behind the fight, and other times he only finds out afterwards.

There is a second death that comes around this time. It’s someone who is very close to Charlie, one of the main characters, who wants Charlie to drop the new promoter and go back to his old ways. Charlie refuses, and this character leaves him. Everything starts happening quickly to this character now. He gets mugged and beat up and then wanders into the street where things get even worse.

Meanwhile, Charlie continues to do things that he normally wouldn’t, all in exchange for getting bigger fights and more money. One of these things is putting off the wedding that he and peg have planned. She is understanding and supportive of him and agrees that putting it off is the right thing to do, but everyone else, including Charlie’s mother, tries to tell him otherwise. It’s no use though, as he won’t listen to anyone, but his promoter at this point.

The corruption builds up until it reaches a climax involving a black fighter who has a secret behind the fight that Charlie doesn’t know. It only comes out later on and so does the way that Charlie’s promoter held this information from him. This is the final straw for Charlie. It’s also the reason why Charlie was muttering that certain name in his sleep. This is the one that stayed with him the most and pushed him over the edge.

The movie as a whole is okay. It definitely gets better once the corrupt promoter comes into the picture. That gives us a villain. Unfortunately this isn’t until about halfway into the movie. Before that everything moves kind of slowly and is somewhat uneventful. There are three major deaths in the movie, all coming at different times in the storyline, and they definitely help keep our interest, but the movie really feels like something is lacking in it’s first half. Luckily it picks up after that.