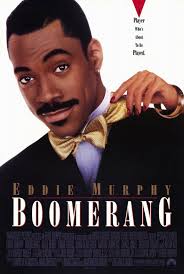 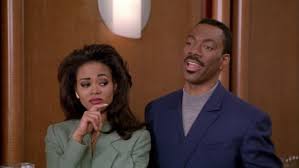 A humorous movie about a player who gets his heart broken, that probably should have been crap, but ends up being both funny and full of personality.

Eddie murphy is terrific in this movie, playing a guy who is all game, and not much heart, until the right girl comes along and changes everything. That might sound like a cliched romantic comedy, except things aren’t exactly smooth with this girl. This movie isn’t about the perfect relationship. Instead, it’s more of a turn the tables situation, where the girl isn’t really into him. he ends being the one waiting by the phone. The first half of the movie might be straight forward and predictable, but the second half of the movie goes in all sorts of creative directions. There are two different love triangles, secrets that are kept, and lots of betrayal. it’s a cool movie that absolutely marks Eddie Murphy when he was at the height of his career and full of confidence and superstardom.

Boomerang works because of Eddie Murphy. This is a movie that was made when Murphy was at the height of his game, full of confidence, and had finally figured out exactly how to make material like this work. He tried to do the same kind of thing a few years earlier with Harlem Nights, playing a similar character, only Murphy didn’t have the smarts to pull something like that off at the time. But with Boomerang, he absolutely knew what he was doing, and was full of confidence, coming off his successful masterpiece movie, coming to American, and it showed.

Murphy plays Marcus, an advertising executive at a major agency who believes he is in line for the next big promotion. He’s a hard worker, but when he leaves work, he plays hard as well. Marcus is a player. He is a man who loves women and refuses to settle down with any single one. Marcus loves the chase of trying to get a woman, but once he has them, he becomes less interested and finds reasons to stop liking them, such as judging the way they take care of their feet. This isn’t that far from Seinfeld episodes, where jerry breaks up with girls for ridiculous reasons…”she eats her peas one at a time.”

Marcus has two friends who look up to him, and laugh at each other. These friends are Gerard (David Alan Grier) and Tyler (Martin Lawrence). The three of them all work in the same building and take lunches together and comment on the state of each other’s lives. All three men are pretty much in the same boat, meaning they are all single and all on the hunt for the right woman.

After watching Marcus work his magic on one girl, pretending to have lost a dog, which he really never had, and getting her to call him just to find out if he found his dog, we watch him have this woman to his house. This is the woman with the foot issue; only Marcus doesn’t notice it until the next morning. That’s probably because until then, he’s not really looking for it. He doesn’t want a reason not to like her until after he has already slept with her.

Back at work, the real story of the movie begins. The advertising agency is going in a new direction, having just landed a big client perfume company. Marcus goes to see the older woman who is the boss of the company at her home. He even sleeps with her, hoping to win points and get that promotion. But it doesn’t work. He learns, not long after this, that this woman, Lady Eloise, is more of a figurehead and puppet for the company than she is, anyone with any real power.

That’s when he meets the woman who is getting the promotion and new job title that he expected to be getting himself. Her name is Jacqueline, (played by Robin Givens,) and she is a no nonsense work-catholic. When Marcus first meets her, he spots her from across the lobby, walks up to her, and immediately starts flirting with her. Only she’s not having any of it.

The two of them start working together, and Marcus realizes that he is really into her. He becomes very persistent, and slowly wins her over, to the point where they do start seeing each other. Only for her, it is just a fling. When Marcus starts to develop real feelings for her, she backs away and tells him that’s not what she wants. All of a sudden Marcus is acting and feeling ways that he has never felt before. In one scene, he sits there, staring at the phone, waiting for her to call.

It’s about the halfway point of the movie now, and we wonder where the rest of the film will go. Marcus already found the girl, went on a mission to get the girl, got the girl, and even broke up with her. What else is there? The movie gets clever in its second half by giving us some new developments that we never saw coming. Pretty soon there is a new woman in Marcus’ life, and there’s only one problem. She is ones of his friends’ girls.

I really liked the direction that the second half of this movie went. There is a love triangle and secrets are kept and then revealed, and even after that, new secrets are kept, as Marcus has to face the sad reality that he is not over Jacqueline, despite the ways that she treated him. As a romantic drama, this movie definitely works. To make it even better, the movie adds lots of humor in, making it more of a comedy than a serious film.

Aside from a movie about the man and his relationships and friends, this film also gets into the advertising world a little and that becomes a nice subplot of the film. There is a model for the new perfume, which is a large black woman with a lot of passion and anger. Her name is strange, and she is played by Grace Jones, the same actress who played Mayday in the James Bond movie, “ A View To A Kill.” this characters adds a lot of fun to the movie, as do scenes about their promotions and advertisements. At one point, Marcus hands over the commercial to another producer and tells him to do whatever he wants with it. That producer ends up coming back with he craziest most horrific commercial for the perfume. There is a good amount of comedy in this movie, including a great cameo by john wither soon as one on the character’s fathers, but the main thing that works about the movie is the story, the drama, and Eddie Murphy’s go for broke performance.