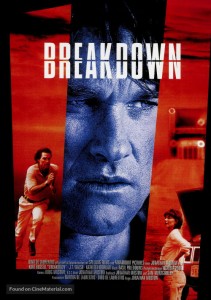 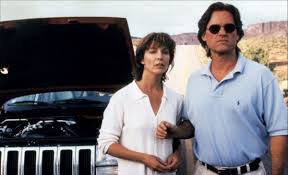 An intense thrill ride in the vein of other great villains on the open road movies like duel, u-turn, and red rock west.

Breakdown is a fast paced, action mystery. it’s a conspiracy kind of film noir that stays on track the entire time. the movie is about a man whose wife gets kidnapped after his car breaks down and he sends her off with a trucker to get help. the woman never comes back, and Jeff (Kurt Russell), goes into town looking for her, only to find out that she’s been kidnapped. he spends the rest of the movie-playing detective and putting the pieces together in order to get his wife back. the movie has a great every man feel to it and is reminiscent of other movies (like north by northwest), where a regular guy gets caught up in a conspiracy web that seems to come out of nowhere. Breakdown has a few small missteps here and there, but for the most part it’s a pretty solid and suspenseful thriller.

Breakdown is a one of those bare bones, simple and straight forward, but at the same time gripping as all hell kind of movies. It’s just like Duel, the Steven Spielberg movie about a driver who gets terrorized by a trucker, in that it’s got a limited number of characters and is about some trouble that occurs on the open road countryside of America. it’s not hard to make a movie with a premise that starts in that direction. What’s so impressive about Breakdown is that it finds ways to keep the momentum going throughout the duration of the film.

That is in large part due to Kurt Russell as the movie’s star. this guy is a perfect everyman actor. Here, in his light blue collared polo shirt tucked into his pants khaki, with his sunglasses on, riding the road in a new car that he is so impressed with, you really feel like this is someone you might come across. Russell is so great at putting the audience in his shoes. He did it with a cop stalker movie a few years before this one, in unlawful entry, and he does it again here.

Breakdown is a sort of film noir. It’s certainly a mystery with one man caught in a kind of North By Northwest-like conspiracy. That man is Jeff Taylor who is out driving on one of those mountainside highways where you feel like you are in the middle of nowhere, with open road and open sky ahead of you, and no other cars in sight. When he takes his eyes of the road for a moment, Jeff nearly hits another car. That ends up being the beginning of a chain of events, where his car breaks down and he and his wife, Amy (Kathleen Quinlan), are stuck on the side of the road.

To make matters worse, the driver who Jeff nearly ran off the road by mistake, earlier on, has caught up to them again, after running into them at a gas station. That driver now passes them, drives off into the distance, while still remaining in sight, and then turns around, his car facing right at them. This is intimidating, and it forces Jeff to not wait any longer before flogging down the next driver who passes by, for help. This driver is a trucker named warren, played by the late, great J.T. Walsh.

Warren doesn’t have a working radio in his truck and is actually on his way into town to get it fixed. He tells the two of them that he can take them along, into town, and get them access to a pay phone where they can call to get a tow truck out there. Jeff and Amy decide not to just leave their car, but to have Amy go with warren on their own. This is their big mistake, although later on in the movie (when the villains are discussing it), we find out what would have happened if Jeff had gone along too, and it sounds like circumstances would have ended up pretty similar to what does happen here.

Warren and Amy disappear in the truck, heading off to town. Warren told Jeff the name of the diner where he would be bringing Amy to make that call. As Jeff sits there, waiting around in his car (glimpses of Kieffer Sutherland in the vanishing here, just waiting around with nothing to do), he decides to look inside the hood himself. That’s when he notices the problem, and fixes it. Now Jeff is able to drive himself into town, he shows up at that diner, bells, and is shocked to not be able to find Amy anywhere in sight. On top of that, the man running the restaurant doesn’t seem to remember her.

Still, things seem like they’re okay. that guy behind the counter didn’t seem too sure of anything, and clearly wasn’t paying much attention to who came in and out. maybe Amy got the tow truck and was on her way back to where they left the car, right now. Jeff exits the restaurant, hops back onto the road, heading towards his car, and that’s when he passes warren again. Now is where the movie gets interesting and unusual. Warren claims he doesn’t recognize Jeff.

Jeff can’t imagine what this guy’s game is, and so he quickly grabs a passing police officer and gets the guy to hear his story. Warren claims that maybe Jeff is mistaking the truck for somebody else’s. The officer searches the back of warren’s truck and can see no sign of a struggle. He ends up letting warren go. Now Jeff is on his own, back to square one, only worse than before, because he knows something strange is going on. that was definitely the right guy in the exact same truck, and yet he pretended not to know Jeff at all.

This is what leads to a pretty cool mystery. there are a number of people in the town who get involved, trying to shoot at Jeff or drive him off the side of the road in all different moments. The first half of the film is the mystery and the second half is action, and it is just enough to deliver the thrills while keeping the audience involved in the story. I love the way we slowly meet the different characters that are involved in the kidnapping, one at a time.

There are definitely some moments in Breakdown that take liberties, such as when Jeff is running beside a truck and then hanging onto the side of it, and the whole time the trucker never notices him. Still, you go with it, knowing full well that Jeff is not an action star, but an every man, and we will give him the benefit of the doubt in order to enjoy the movie. The story is great, and the villainous characters are menacing. The movie builds up in its action, and the end is certainly climactic. this movie is a pretty wild ride.