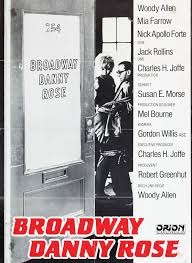 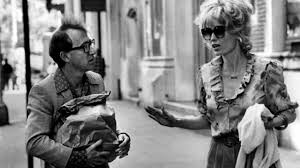 Definitely not one of the better woody allen movies, this one has a very mediocre and often dull plot, yet still manages to be funny every now and again.

Woody Allen is a comedic master. He is absolutely one of the most talented people working in entertainment and is especially wonderful because he has found a sort of niche that nobody else does anything even remotely like. His movies are about guys who are nervous nellies, always worried and paranoid and yet at the same time, often the voices of reason. It’s the characters all around his stars that are the crazy ones, throwing caution to the wind and going about their lives doing things however they please. And it’s the star, (often the Woody Allen character), who has to pick up the pieces.

This is definitely the case in Broadway Danny Rose, where Allen plays the title character, booking agent Danny raised, a guy who spends his life trying to manage and please his clients. In many ways it’s the perfect Woody Allen role, so much so that he made a similar movie about a decade later, called celebrity. In that film, Kenneth bring played the Woody Allen part, and captured the actor’s mannerisms pretty nicely.

In fact, in every woody Allen movie, there’s a character that embodies the Allen persona. In his comedies, it is always the main character. Such as the case in whatever works, with Larry David playing the older, nervous Jewish man. And even in Allen’s more serious films like match point and Vicky, Christina, Barcelona, a character with these traits can be found. In match point, it’s Scarlet Johansen, and in Vicky, Christina, it’s Rebecca Hall, playing the part. Even in midnight in Paris, Owen Wilson often seemed to be impersonating Allen at various times throughout the movie.

And while every single woody Allen movie has at least a few laughs and is always worth watching, the fact remains that he pretty much always does the same thing. Especially with his comedies. They always have the same main character and the same surrounding characters, and the only thing that might be different is the overall premise. More often than not, however, the premise is the same. In Mighty Aphrodite, for example, Allen didn’t play an agent, but he played a sports writer hanging out with a boxer, and helping the guy out.

In Danny rose, Allen’s agent character is all about helping out his singer client. This guy, Lou Canova, is a heavy man who is way past his prime. He looks like Deniro in the last scene of Raging Bull, getting up their on stage, without any care for what he looks like and how he will be perceived as being all washed up. And Danny Rose treats him like gold, running around trying to solve all of this guy’s life problems for him.

That’s basically the premise of the movie. Lou Canova has a woman who he’s in love with, Tina, played by mea furrow, and she’s a bit of a hot wire. She’s constantly angry with Lou about him cheating on her or possibly getting back with his wife, and it is up to Danny Rose to straighten things out. The problem is that we’ve seen all this before. In fact it feels like every other Woody Allen movie.

Things get a little interesting at one point when Tina starts seeing a guy who has tough guy brothers who beat people up on the street. And when Tina dumps their brother, the guys come after Danny Rose. At that point he starts dodging them and even considers going into hiding. That is until he comes with another idea to put those two goons off on a different track.

Other than a few laughs here and there; this movie really doesn’t have a whole lot going for it. There’s a scene where a magician puts a woman into a trance and then can’t wake her out of it, and while that’s kind of funny, it’s also been done before in Allen’s movie, New York stories. In that short film, the magician puts a woman into a box, makes her disappear, and then cannot make her reappear again. It’s one more example of how everything in this movie has been done before in other woody Allen movies.

The bookending idea of the movie is that it’s actually a bunch of guys sitting around in The Carnegie Deli telling stories about Danny Rose. And one of the guys (sandy baron, the man who would become jack compulsion Seinfeld years later), says he has the ultimate Danny Rose story. He then goes on to tell about Lou Canova and the way that Danny revived his singing career. The problem is, this really isn’t that great a story.

Woody Allen movies are always entertaining, but sometimes they need a little more going for them then just that they are woody Allen movies. His movies need creative plots, just like anybody else’s movies. And when he relies too much on the same thing he’s already done before, just because he can easily infuse his unique style into it, he’s not really giving us anything out of the ordinary. His best movies are the ones that have something original going for them. Like Annie Hall and its examination of the blossoming and then deterioration of a relationship. Or Hannah And Her Sisters and its story about different people in relationships and some of them have affairs with others. Even Crimes And Misdemeanors, which told a comedy version of match point, about killing someone you are in a relationship with, had something fresh going for it. Unfortunately Danny rose does not. Even today, at the Carnegie Deli in Manhattan, there is a sandwich named after Danny rose. I suppose that is what this movie should be known for. It’s certainly the best thing to come out of this film.