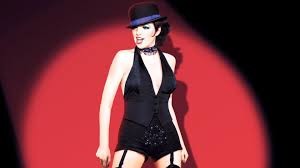 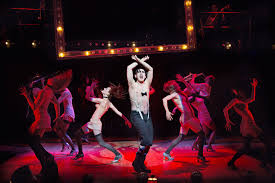 A movie that alternates between scenes of performances in a night club and scenes outside of it, about a relationship, this movie only really gets going in its second half.

Cabaret is an all right movie. It’s the kind of film that is more about the nightclub than it is about the Nazi’s occupying Germany all around the main characters. And it’s not as if this movie is about the businesses or relationships inside the night club either, like say the movie 54. Instead, this movie simply gives us lots of nightclub performances on the stage. It’s no wonder this film is based on a very popular Broadway play which is still running today to great success. It’s more flash than story and as a stage piece, it’s very entertaining. As a movie, it’s just okay.

The film starts out on stage with an emcee, Joel Grey (playing a character known as the master of ceremonies), speaking to the audience with music playing in the background. He welcomes everyone in, begins some songs and then brings up a number of other acts in the show. One of these involves Sally Bowls (Liza Minnelli) that will be the main character of the movie.

From the theater, we move to sally’s apartment, where an Englishman (brain, played by Michael York), is looking for a place to stay. Sally finds an apartment in her building for him and the two of them become friends. Brain goes to see sally perform some night and admires her for being able to do that. For work, he starts giving English lessons to Germans who are seeking to learn the language. Two of these students of his (Fritz and Natalia), end up starting a relationship with each other.

Sally and Brian also have the rumblings of a relationship. She flirts with him and tries to get him into bed. Brain tells her he’s not really interested. He tells her that he’s been with three other women and that none of the times were successful. Sally wonders if maybe brain is gay. His reasoning about the three women doesn’t make much sense to her. What does he mean, when he talks about how they all resulted in failure? Does that mean he never enjoyed it after attempting three times?

This is basically the extent of what happens in the first half of the movie. It’s nothing very exciting and it takes a long time just to work up to this small handful of ideas. The three women part is probably the best part of the first half and it doesn’t come until a solid ways into the film. Then the second half begins and things suddenly get a good deal better. For one, this is when the Nazi party starts to make its presence known in the streets.

Sally and brain decide one night to put aside the three women situation, and to try to be together, romantically, after all. There’s a fun scene where brain goes to visit her at work, after they’ve started dating, and sees her sitting in a booth with her arm around another guy. This is part of her job, she explains to him, but even still, he doesn’t like it. Brain calls sally’s table and tells her over the phone to tell the guy she is the girlfriend of a mob boss. Sally has a better idea. She tells the man that she has a mild case of syphilis and then brings another woman in to replace her. This is the funniest moment so far in the film. It’s already starting to get better and livelier.

Back at home; Sally starts romancing a man named maximizing. He’s a very wealthy businessman from Austria who is visiting Germany. Sally takes him under her wing and brain gets a little jealous. He can’t believe what’s going on right in front of his eyes. Brain slowly learns that sally has a free kind of lifestyle without rules or limitations. She does what feels right in the moment and doesn’t question her desires. Instead of continuing with the jealousy, brain learns to accept this and he actually joins sally and max in their lovemaking.

All the while, the Germans are building up more and more around them. There is a scene where brain and max are sitting down at an outdoor cafe when some music starts. It is a young German soldier singing a Nazi song. As he sings, he gets the crowd involved, having them stand up and join him. Soon it becomes like a patriotic song, like the singing by victor Lazlo in Casablanca, with people rising up to join in as a matter of national pride. All this disgusts brain and he quickly leaves, taking max along with him.

Max doesn’t like what he is seeing. Things have gotten too serious, here in Germany, and this trip is no longer the fun escape that he came there for. He leaves the two lovers behind and heads back to Austria. Sally and Brian then confess to each other that they had both been sleeping with max, separately. Brian is pretty upset about everything that has been going on. He’s been left by Max, Sally betrayed him, and to make matters worse, she is pregnant and has no idea, which one of them is the father. With all of this building up inside of him, brain goes out, sees a bunch of Nazis standing by the Nazi flag and starts pushing it over. He ends up getting beat up and sent to the hospital for this.

The problems with the Nazis surround the students who became a couple earlier on, as well. Fritz and Natalia both love each other, but the issue is that she is Jewish and he is not. She tells him they cannot be together. The Jews are being persecuted all around them, and she does not want to subject him to this. Fritz has a secret of his own; that he’s been holding onto, and it’s big enough to change everything between he and Natalia. There is a dog killing threat that happens to Natalia, but aside for that horrific moment, her story actually ends up happier than expected, with the romance taking on a new and unexpected form. I’m surprised both she and fritz didn’t find themselves facing a tragic ending. I suppose the movie had to have some happiness towards the end. Cabaret is an interesting film with a very slow first half. Luckily the second half makes up for it.