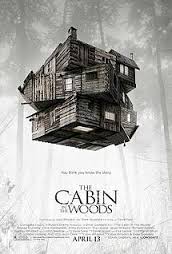 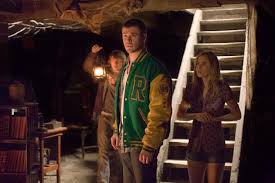 A very creative and campy horror movie that goes even more for comedy than it does for scares.

Cabin In The Woods is an extrememly entertaining movie that knows all of the cliches of this genre and intentionally works against them. the movie knows how the story of five kids going off for a weekend getaway to a secluded cabin is supposed to go. But it has some unusual ways of turning that story on it’s head. For one thing, there are a group of people watching these kids, and when the attacks start coming, we constantly cut back to the watchers, having fun. the result is very humorous. we are never too scared, because there is humor around every corner. The film really has three tones to it. there’s the horror, the creative, and the funny. For people wanting a straight up horror flick, this is not that movie. it tries to avoid the cliches instead of going right along with them like most horror movies do. the final act is where the campy humor comes in, and boy is it a lot of fun.

The Cabin In The Woods is like a cross between cabin fever and cube with some Evil Dead 2 mixed in there just for fun. On the one hand, it’s a cabin in the secluded woods, horror movie. On the other hand, it’s about a sort of game and society much bigger then this. Like Cube, it’s about an elaborate sort of competition that revolves around technology. And the brilliance of the movie is that away from all of that machinery and game show-like televised atmosphere, this is really just the story of five kids out in a cabin and what they have to deal with. It’s very simple inside the box, but outside the box is where things get extremely interesting.

The movie opens with two guys driving around a sort of factor, in a little cart, with people operating machinery all around them. The characters are played by veteran actors Richard Jenkins and Bradley Whitford. We don’t know who these guys are, or what they do, but we can tell they’re up to something. They exchange a couple of funny lines with each other, ending with a punch line, and then bam! The title of the movie flashes onto the screen and freezes, like the title to each episode of the Kenny powers HBO show, eastbound and down. Clearly humor will be king in this movie, and they’re setting that up from the very start.

Following this brief introduction, we meet our characters as they pack up and get ready for their trip. First we meet two attractive young ladies, Dana and Jules. Dana is the nice, innocent one who is walking around in her underwear when we meet her. Jules is the wild and slutty blonde. Apparently she just died her hair that color recently. Jules has a jock for a boyfriend, named curt, played by Chris Hemsworth (Thor). Curt shows up, has a few words with the girls, and reminds Dana that she’s not wearing any pants. That’s when the other friends start to arrive at the house.

There’s Holden, the scholar and friend of Kurt. And then there’s Marty, the stoner and fool of the group. Marty is absolutely hilarious. He shows up at the house, driving his car while simultaneously smoking out of a giant bong that he keeps in his lap. When the friends question him about this, he spews off a theory about how cops won’t pull over someone who is smoking and driving because they think that person is out of his mind and they don’t want to mess with him.

The five-college students pile into a rave and head for the cabin that belongs to Kurt’s cousin. They have small conversations on the road, like about how gaps’ can’t even find this place because it is so far off the grid. And then they arrive at the obligatory run down gas station, right outside the woods. This scene has become a classic staple of the genre. It’s everywhere from deliverance to cabin fever, and there’s always a very weird owner working at the place. Here, in cabin in the woods, he is about as creepy as ever. Of course, the movie has fun with that in a later scene where this station owner calls the house operators and they make fun of him on the phone, putting him on speakerphone, and laughing at the ridiculous antics he has to say.

Once the crew arrives at the cabin, they set up shop and start getting comfortable. I love how we get to spend a good amount of time with them in the cabin before the crazy starts to happen. We watch as Holden discovers a two-way mirror and is tempted not to say anything as Dana starts undressing in front of it. Then we join the five of them for a very lively game of truth of dare and watch what has got to be the greatest dare scene in movie history, or certainly a place holder high on the list. The scene involves Jules demonstrating just how far she will go to have some fun.

The five of them find a trap door to the basement and head downstairs. Once there, they find a collection of all sorts of weird items and each one of them picks something up, or finds something different to pay attention to. At this point we have also seen a lot from the guys running the operation back in the lab, and we see how they have been taking bets about something. We’re getting close to finding out exactly what this is all about. Dana finds an old diary from a girl who lived in the house with a family of murderers back in the 1800s. She starts reading the diary out loud, including the Latin parts, and suddenly the crazy begins.

For a while now, the attacks on the college kids are pretty routine. As soon as certain enemies start showing up, we know that the tone of the movie has changed. It is no longer realistic, funny horror, but is now just incredibly fake, campy fun. And we love it all the more for that. The only other time I’ve seen a tone change this drastic and this far into the movie was in from dusk till dawn. In that movie, we spent the first half alongside killers and criminals in what seemed to be a pure crime flick. And then the second half turned into a vampire-killing extravaganza. Well, cabin in the woods is made with the same kind of spirit and energy. Except it’s a whole lot funnier.

The cabin attacks are the third act of the movie, and they are pretty good. But they’re nothing compared to what is coming. Part of the fun of this movie is that it is an unflinching mystery that keeps raising more and more questions as it goes on. They are all, or just about all, answered by the end, but the way the movie keeps us guessing until it is ready to reveal them is pretty brilliant. A scene where a character takes a motorcycle out and tries to ride it over a cliff, for example, has a very wild and shocking conclusion.

The final act or two is where this movie becomes exceptional. It’s the aftermath of the cabin, as the characters find themselves making it to another level, just like in a video game. And this is where the real secrets start to come out. The action and ideas in the final act are nothing short of insane. And that’s meant in a good way. There is also a lot of revelation about things that came before this in the movie and why certain characters were the way they were. It is a fantastic film, with great humor around every corner and uncontrollably creative ideas, just waiting to pop out. This is a movie that does something different and its creativity is certainly to be commended. It is an incredible rush and a really wild film.