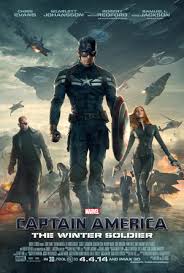 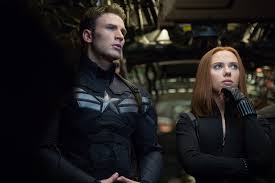 Very action-packed and entertaining, this one features a cool seventies-style, conspiracy storyline.

Captain America: the Winter Soldier is a worthy sequel. In fact, it is better than the first Captain America movie, with more action and a deeper, more complex storyline. There’s a lot going on here, including a mystery angle with a seventies conspiracy-feel where you don’t know who to trust. The movie features many key players from the Marvel / Avengers universe including Nick Fury and the Black Widow. It also contains some great stunts, and a neat super-villain. This is one of the better superhero movies to date.

Captain America: The Winter Soldier is far better than the first Captain America film. It also has more action than any other superhero movie around, other than maybe The Avengers. There’s a great conspiracy storyline that runs throughout the majority of the movie. On top of that, there are some pretty cool twists that you really don’t see coming.

At the start of the film, we get a scene of Captain America (Chris Evans) running laps around the Lincoln Memorial, passing by the man who will later become The Falcon (Anthony Mackie), and constantly saying, “on your left.” This is the comedic introduction to how super human Captain America is. Then we get an action scene aboard a ship out at sea that really turns into a series of fantastic fights as multiple characters come on board and start going at it. We follow Captain America beating guys down and we also follow the Black Widow, (Scarlet Johansen) doing her own fantastic stunt work.

The ship sequence is fun, and I like that the action lasts for a long while and is not over in the blink of an eye. Captain America throws his shield around like a boomerang and uses it fantastically as a weapon, but he also gets into the hand-to-hand combat stuff. And I love that there are actually some opponents here who provide Captain America with a challenge.

And then the action takes a break, and we are thrown into the story. Captain America sees that Nick Fury (Samuel L Jackson) is up to some major spying on American citizens with new high-tech equipment. This all comes from Captain America finding the Black Widow on the ship with a different mission than his, and learning that it was a mission kept secret from him. Captain America (real name, Steve Rogers), has a problem with this. Nick Fury (Samuel L. Jackson), tries to convince him to take on the “Minority Report” point of view, that you can stop crimes before they even happen if you have the right technology. He then takes Rogers downstairs to show him three giant helicarriers that are being constructed.

Now, we’ve seen hellicarriers before. Those are the giant air-craft carriers that have propellers and fly up in the sky. We saw one in The Avengers and spent a lot of time on board it (a little too much time). So the fact that the hellicarriers are so prominent in this Captain America sequel doesn’t amount to a whole lot. This time instead of one, there are three. So what? We’ve seen them before. It’s fine here, at the start of the film, but what’s not fine is that the hellicarriers actually become the set piece of the climax. The climax should be the part, more than any other, that gives us something new. these things weren’t even the climax setting for The Avengers, the movie that introduced them.

Luckily the story picks up after we are only about twenty minutes, or so, in. An important character gets attacked by a whole ton of mercenaries and there’s a mystery surrounding the reasons why. He’s suddenly on the run and the target of a major conspiracy. Then there is a key death, and major ramifications, and suddenly we have ourselves a movie. At this point, the plot has become something pretty cool. There is Robert Redford as Alexander Pierce, Nick Fury’s long time friend, and the second in command of the organization where Furyworks, known as S.H.I.E.L.D.

Captain America becomes a target simply because he doesn’t trust anyone and refuses to reveal what he knows. We also meet a super villain known as the Winter Soldier who is working with the bad guys, whoever they are. This winter soldier wears a mask that covers his face and has a metal arm. He’s also got super human strength and the fight sequences between he and Captain America are fantastic. There’s a lot of hand-to-hand combat and some of it even call to mind the kind of fights that were featured in The Bourne movies. Talk about attention to detail, this is exactly what we saw promise of during that easy scene with the ship out at sea.

In between the action scenes, we get lots of moments of Captain America figuring out this new world and adjusting. None of them really go over as well as they should or are given the time they deserve, but these brief glimpses at his experience are still a welcome addition to the film. There’s a joke about the internet, a pocket notepad where he writes down things to check out, a Smithsonian exhibit about the experiment that transformed weakling Steve Rogers into superhero Captain America, and a visit to the elderly Peggy Carter) Captain America’s girlfriend in the first movie.) I appreciate that the movie featured these moments, but none of them is delved into very deeply at all. Maybe that’s a good thing. after all, the Amazing Spider Man 2 lost us with two many subplots being given too much time. This movie knows better.

The storyline takes on a weird twist about halfway in that really changes everything. It involves Hydra, the organization that was led by The Red Skull in the first movie. I always considered Hydra a division of the Nazis, and so seeing it in this movie doesn’t seem right. Neither does an abandoned building they find with some strange computer work going on inside of it. But for everything that doesn’t work about the movie, there are lots more things that do. These include the movie featuring both The Black Widow and Maria Hill (Colby Smulders), two major characters from The Avengers. At one point in this movie, with Nick Fury, the Falcon, Captain America, Black Widow, and Maria Hill, all standing around making a plan, it almost feels like a Mission Impossible film with a team of characters working together to plan out a heist or operation.

I’m not sure why Steve Rogers constantly trusts these characters, when clearly there is a compromised threat going on within S.H.I.E.L.D., and a little bit of doubt would have gone a long way. But he doesn’t have any. Maybe the movie feared it was doing too much. And so it moves us along to an ending that is huge in spectacle, but not all that great in terms of detail or feeling. You’ve got Anthony Mackie flying around on wings that make him look like he is part transformer, and lots of gunfire and explosions. The ending falls short of it’s mark, with a little too much going on all at once, but for the most part this is a pretty good movie. the twists work and so does the whole mystery feel to the storyline. I’m glad there was a lot of action, and while it does feel like a little too much, that is far better than the opposite way. If only some more attenton was paid to details (like learning how exactly the The Falcon’s wings work and what they are all about,) this movie could have been a little cooler.