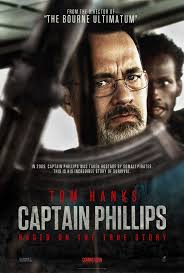 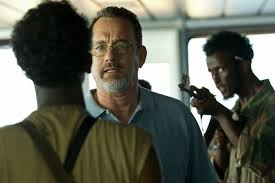 A mostly exciting and tense movie, the first half is thrilling, but the second half is a little too long and tiring.

There’s an interesting story here, about a cargo ship getting hijacked while out at sea. This is a true story that really did happen a number of year ago and the movie tells the story of this pirate attack. It handles the details and serious tone nicely, especially in the first half. The film is by the same director as United 93, and there are loads of similarities.  The first half of the movie is all about the ship. Then, in the second half, Captain Phillips is taken on a lifeboat and the rest of the movie stays there. This becomes a problem. Way too much time is spent on the lifeboat, tiring us out. The movie is too long, and if more of that lifeboat time had been cut, this could have been an even better film.

Captain Phillips is a pretty intense movie. Especially in its first half. In the second half, the movie starts to go on for much longer than it should, and get lost in the details, forgetting about the big picture. Like most movies that come out in the awards movie season (late fall-winter), and are based on real life events, the movie loses track of It’s focus in the interest of creating a more epic feel. It’s a mistake. we’ve seen it with Lincoln, Zero Dark Thirty, and countless other films. Longer is not better. I know the reason for it is to make the movie get taken more seriously, but what usually happens is adding extra length just makes the momentum start to stagger. Les Mis, the Hugh Jackman version that got Anne Hathaway an Oscar added songs and parts of the play to make the movie super long. Ridiculous. Captain Phillips doesn’t do anything that overboard, but it certainly could have been tighter.

the movie is about the incident a few years back where armed pirates boarded a u.s. cargo ship and held the passengers hostage. they eventually kidnapped the captain and used him for collateral against the u.s. navy. the movie was directed by paul greengrass, the guy who made the last two matt damon-jason bourne movies, and then made united 93 about september 11th. it is that film about the terrorist airplane highjacking, that really makes greengrass the perfect director for this movie. there are plenty of scenes in captain phillips, that seem right out of united 93, with characters looking at maps or electronic trackin systems and explaining to each other what they see and what it means.

we meet phillips (tom hanks) at the start of the movie, as he is driving to the airport with his wife. she is played by catherine keener in a one-scene, very brief role, and the two of them talk about how it never gets easier, with phillips going out to see for these long journeys. then their conversation shifts toward their children and the future and how things are so different now than when they were younger. by the end of the conversation, they both agree that they are doing a good job raising their kids.

now phillps drives through the cargo loading docks, looking for his ship. he drives passed all of the giant containers, and when he finds his ship and boards, he starts greeting everyone. these guys are old friends who have worked together countless times before, and it’s almost like phillips’ second family. at the same time, phillips is not about to let anyone slack on the job, no matter how close they are. when he stumbles across three or four guys in a room just relaxing and having coffee, phillips lets them know that they need to finish up and get back to work.

while we are meeting the crew on board phillips’ ship and watching him get setup for the journey, the movie turns to somalia, where we see a group of men on the beach front, figuring out their plan for the day. these men are robbers. they go out to the sea with machine guns and steal both cargo and ships. for today’s plan, a skinny man named muse is put in charge of one operation. he selects his crew by hand from a pack of men who want to work, and even hears some objections like, “how come you chose him? He’s from another village.”

muse and his men setout on one large boat with radar and two smaller motorized lifeboats attached. when phillips spots the pirates in their boat, some distance away, he starts to think something is up. the alabama (the ship of phillips), has gone far away from all other ships, leaving the safe water area in order to make better time. there is no reason for any other boats to be out there, where they are. still, just to see if these guys are actually following them, phillips asks his men to turn the ship a little bit in a new direction. he then watches as the pirate boat makes the same turn, following them.

the men from the pirate boat board their two motorized life boats and start riding towards the alabama. at this point phillips starts calling the coast guard and anyone else he can get his hands on, in order to request help. the u.s. line isn’t answering, but the british line is and they tell him to prepare his hoses, but otherwise sit tight and most likely these guys are just there to fish. phillips doesn’t buy it. he warns his crew that this is “real world” and not a drill (just like in united 93), and they get ready.

the pirate boats have some problems and have to turn back to their mother ship. especially after phillips comes on the radio, doing a different voice and pretending to be the coast guard, letting him know that they are sending help. this scares one od the two lifeboats off. the other one, however, led by muse, fixes up the engine problems and comes back. this time, there are no false alarms. the alabama turns on its hoses, all around the ship, creating a sort of force field. only muse finds the hose that is weakest and not quite working correctly and that’s the one he goes after. his men get around this hose, fire some bullets up at the man is trying to fix it, and then set their ladder up and board the ship.

everything leading up to the boarding, and now with the pirates on the ship is great. it’s all very gripping and phillips uses a number of smart maneuvers to manipulate the pirates. at one point he holds down the radio button and talks to the pirates, telling them where he will be taking them. the radio sends this broadcast through the loud speaker so that his crew members who are hiding can know what to do to cut the power and make it impossible to search the ship. all of this is great. unfortunately at somewhere near the halfway point, the pirates abandon the alabama for a lifeboat, and it all goes downhill.

the problem with most of the second half of the movie is that nearly all of it takes place in this little lifeboat, and it starts to get very claustrophobic and repetitive. there are five guys crammed in there (phillips and the four pirates), and apparently it is very hot and stuffy. we feel the characters’ pain. i suppose that is the point, but this segment just goes on for way too long. it’s nearly half of the movie in this tiny boat. this segment should have been the conclusion of the film. the last thirty minutes at most. instead, it ends up taking up way too much of the movie, and the longer it goes on, the more of the movie’s momentum from the first half gets lost. it’s still a very good movie, but could have definitely been trimmed down.