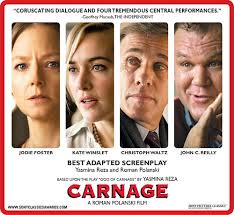 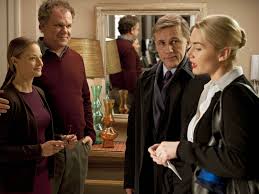 An experimental film about two couples in one apartment and the conversations they get into as they try to discuss a fight between their sons.

Carnage is an ambitious film with some dynamite actors, and even a very talented director. The movie has a lot to offer, and is certainly unique, and yet it doesn’t really work. Not for it’s entire duration anyway. In the first thirty minutes or so, it is absolutely cool and enjoyable, if for nothing more than to see how this material will be approached. But after that, it slowly starts to go downhill, and there’s really no pulling it back up.

The movie is about two couples in an apartment. They are discussing their sons, who recently had a fight. One boy, named Zachary, struck the other boy, Ethan, with a stick. Ethan lost two teeth as a result, and his parents (Jodie Foster and John C. Reilly), invite the other boy’s parents to discuss the matter. The movie opens with all four of them standing around a computer where Penelope (Foster) is writing a statement and reading it out loud.

Christoph Waltz and Kate Winslet play Zachary’s parents, and Alan (waltz) has a problem with the way Penelope is wording her letter. When she says that Zachary was “armed” with a stick, Alan makes her change it to “carrying.” This sets up a lot of what is to come, with these two characters in particular often going at it throughout the film.

In fact, at one point or another nearly every character turns on each other. Luckily it doesn’t ever happen all at the same time, where one character faces off against everyone, but instead, gradually, throughout the course of the film. In the first part of the movie, it’s one couple against the other, each one standing by their spouses and defending their sons.

Michael (John C. Reilly), and Penelope, try to be very reasonable and offer the other couple peach cobbler, while trying to keep everything settled at a calm level. Michael, in particular, is the voice of reason, making sure the adults don’t end up acting like their kids, and work out the problem in an adult manner. But there’s a lot to discuss here, and even he and his calm demeanor, can’t keep a handle on things forever.

Nancy (Kate Winslet) is the more calm one in her relationship, with Alan, but she has a problem with how in control Michael is. Maybe it’s that she is so frustrated with her husband being on the phone all the time, and being selfish, and is jealous when she now sees a man who is a total push-over and completely devoted to his wife and family. Nancy finds the right buttons to push to get Michael to crumble, digging into him about a hamster that he let free in the street, essentially killing it, simply because he didn’t want to touch it.

This turns out to be the right button to push, not only to get Michael upset, but also to get Penelope worked up at her husband. Apparently she had a big problem with the hamster situation as well, and now it all comes out. She and her husband start turning on each other, and Michael is no longer the calm and collected individual that we saw in the first portion of the movie.

This attack on him by the women ends up, strangely enough, making him unite with the other man. He and Alan suddenly become comrades, defending themselves against women who complain and have problems with the things that they do. In the first half of the movie, a climactic moment had Nancy throwing up all over the room, and brought the two away from each other, as she and her husband got cleaned up in the bathroom, while Michael and Penelope stayed out in the living room trying to dry things and clean the place up. That gave both couples the chance to privately discuss the other one.

In the second half, the big climactic exclamation point has Nancy snatch her husband’s phone right out of his hands and drop it in a vase of water. Michael and Alan freak out about this and together take the phone pieces apart and try to dry them individually. At this point, after the two men have had drinks together, held cigars together, and now are dealing with the phone problem together while the wives stand around laughing, it has clearly become a battle of the sexes.

There’s a lot going on in this movie, and yet it doesn’t all work simply because it’s all fighting. Just like the famous play turned movie, Who’s Afraid Of Virginia Wolfe? There’s only so much fighting a person can take. Watching a movie is meant to be a pleasant experience, and that often includes criminal / mystery escapism, but if it’s going to be a topic that is completely realistic and simple, such as two couples sitting around an apartment, then it shouldn’t be all arguing and fighting. I started to lose interest in this movie around the halfway point when the husbands and wives started turning on each other, airing a side of their relationships to these strangers, that should never have been shown. When one couple was arguing against the other couple about how to parent their children and what happened with the boys, everything was fine and on the right track, but as soon as the movie branched out into totally irrelevant topics (the hamster), the arguing just felt tedious. As if that weren’t enough of a problem, the movie has Alan and Nancy try to leave the apartment two or three times, just to get pulled right back in and sit down again. That felt a little ridiculous, like something out of the exterminating angle, where guests can’t leave a building for some reason and don’t know why. In this movie, it just seemed fake. I understand that the point was to give us a change of scenery, to get them out into the hallway instead of in the living room, but they should have found another way. This movie was interesting and creative ideas, and a lot of them work, but a lot of them also just leave you with a bad taste in your mouth.