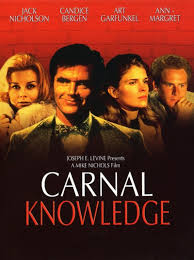 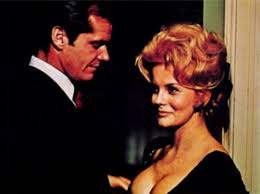 In Carnal knowledge, the two roommates start out as guys who have never been laid before. They’re new to college, and right away start encouraging each other to go after women. Jonathan (Nicholson) pushes his roommate Sandy (singing legend art Garfunkel) into approaching a girl named Susan at a party, and the next thing you know, sandy and the Susan has become an item.

That’s when Jonathan steps in and asks Susan out himself. At first she doesn’t know what to expect, being asked out by the best friend of her boyfriend, but soon, Jonathan makes his intentions clear. He’s interested in her too. And soon he’s telling sandy all about this new girl that he’s been seeing, leaving out her name, of course.

At this point, the movie is incredibly interesting. How can Jonathan do this to his best friend, we wonder, and more importantly, why? It reminds me of something out of the men against women nineties movie “in the company of men,” which featured two guys asking a woman out with the intention of dumping her in the most brutal way. Similarly, we wonder if Jonathan is dating Susan because he is jealous of sandy, or because of something else. Maybe he actually wants to hurt his friend. Maybe he’s just addicted to danger and wants to see how much he can get away with without getting caught.

Jonathan is the first one to sleep with Susan and to take her virginity. And not long after that, he asks her to break up with sandy. When she refuses, he dumps her. He is so jealous of sandy, during his relationship with Susan that he screams at her about not being able to tell him thoughts he never knew he had the way sandy says she does for him. It’s pretty funny in how ridiculous it is, as if she has this magic power and she has shown it to sandy, but not to Jonathan. That’s how Jonathan seems to feel, anyway.

By the time the college triangle of Jonathan – sandy – and Susan has come to an end, the movie is about a third or so over, and the most interesting parts are behind us. We follow Jonathan as he goes to see a sort of fortuneteller named bobby (Anne Margaret, looking bustier than ever.) Jonathan ends up going home with her and starting a relationship.

Sandy, meanwhile, is unhappy with his relationship with Susan, and Jonathan sets him up with another girl instead. There’s a great scene, which serves as the sort of setup scene, as Jonathan, sandy, bobby, and this new girl, Cindy, all play tennis together. Only it’s not doubles tennis. It’s singles, with the two people who aren’t playing on the court sitting on the sidelines and watching. Jonathan never steps off the court and bobby never steps on. That’s a metaphor if ever there was one for the way he treats her. He isn’t the least bit interested in her anymore, and treats Cindy like a queen instead. Even though she’s the girl he is trying to sandy up with. Not all that much has changed since the college days when Jonathan was going after sandy’s girls.

That tennis scene never shows the court or the players on the court, but instead stays on the bench with the characters who are sitting there, the whole time. We here the players on the court talking, but the camera never moves off the bench and that’s important because it really points out how the bench represents a sort of second tier for the players who are not chosen, and stepping up to the court represents becoming the center of attention. At first it’s Jonathan and sandy on the court. Then Jonathan calls Cindy to come and take sandy’s spot, and suddenly it’s sandy and bobby sitting on the bench together, the two outcasts, watching their friends play.

That technique of staying in close-up on one single shot is used a lot in this movie and it doesn’t always work. It’s meant to be artistic, freezing on one image as we listen to the dialogue happening all around it, but it becomes annoying just as often as it seems cool. It’s an example of the director, mike Nichols, trying to be creative, and it does make the movie feels very independent, but at the same time, it’s often not showing us what we want to see.

There’s one more interesting scene as the boys decide they want to switch partners, and are surprised by the results that come out of this decision. After that, the movie just drags on. It’s final third has nothing really going on at all. Sandy finds himself with carol Kane, watching Jonathan present his slideshows of all the women he’s slept with, and Jonathan finds himself unable to accomplish all that he used to be able to and needing some special assistance. It’s a good movie, but it certainly loses steam as it goes on. The first storyline, about Susan, is by far the best. After that, the storyline about bobby and Cindy is okay, but it’s not half a good as the way this movie started. And finally, by the time we see sandy with carol Kane and Jonathan going into a role playing woman’s home, the movie has lost it’s energy. That’s okay though, because it is the very end of the film. And for most of the way up until this point, it was a pretty clever. The conversations between these two guys at various points in their life, about their sexual wants and jealousy of each other’s accomplishments are what driver the film.