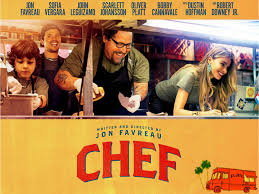 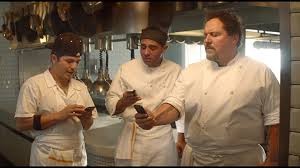 A good movie that clearly is going for something different than what we’ve seen before, this one works for the most part, but is a little to devoid of conflict in the second half.

Chef is a creative movie about a big time kitchen chef at a high-end restaurant who realizes the life just isn’t for him. Casper (Jon Favreau) is the kind of guy who needs to be his own boss. Especially when a food critic is coming to town and will personally rip Casper apart in his article if things don’t go well. Casper is excited about the menu he has prepared for this big night until his boss, Riva (Dustin Hoffman) steps in and changes everything. The movie has a great first half, with a fantastic Twitter storyline and then some really intense scenes between Casper and Riva. Once he leaves the restaurant for the food truck business, however, it doesn’t have nearly the same kind of pace or energy. This is a movie that lacks in a climax. It does have a resolution, but that seems forced considering we never knew the thing that it solves is still an ongoing problem.

Chef is an interesting movie. It’s something different, as it chronicles the experience of a man who runs the kitchen of  a major, high-class restaurant and then decides that this lifestyle is just not for him. There haven’t been many movies about chefs and restaurants that have really worked, (Big Night is one of the rarities), and there certainly haven’t been many about opening up a food truck, which is what this film becomes. What also makes the movie unique is that it starts big and then gets small. The opening segments of the restaurant are some of the most fast paced and exciting scenes in the movie. Neither the film nor the chef, Carl Casper (Jon Favreau) can sustain that pace forever, and so the movie is about what causes him to leave the restaurant and what happens to him afterwards.

At the start of the film, Casper is working in the kitchen, running the show at this restaurant. We meet the other chefs who work under him, played by John Leguizamo (Martin) and Bobby Cannavale (Tony.) We also learn that Casper is a family man with a son who he is very close to and an ex-wife, (Inez, played by Modern Families Sofia Vergara,) who he is still friends with. He takes pride in his work at the restaurant and likes to get creative with the menu whenever possible in order to show off his artistic ability and skill.

Unfortunately, his boss, Riva (Dustin Hoffman) doesn’t agree. This all comes out on the night when a food critic will be visiting the restaurant. Casper has a unique and elaborate meal planned and then Riva comes into the kitchen and shuts it all down. He’s the owner of the restaurant and as such, he has the final say in all important decisions. Riva tells Casper that they need to play their hits, or make the dishes that are most popular. They need to make the things they are known for. He gives a Rolling Stones example, asking Casper to imagine going to a Stones concert and then they don’t play “Satisfaction.”

Another movie would have used this disagreement in the restaurant as the big meltdown scene that drives Casper away from the restaurant. It would have been that quick. One scene to show a problem and then him off into the world of the rest of the movie. But this film takes the restaurant storyline and runs with it for the first quarter or so of the film. Casper goes along with Riva’s desires that first night and makes the boring menu he is asked to provide. The food critic (Ramsey Michel, played by Oliver Platt) rips him apart, claiming that Casper has lost all spark and drive and initiative. That’s when Casper gets onto Twitter to see what people are saying about him and ends up unintentionally starting a Twitter war with this critic.

The twitter scenes are hysterical. Casper can’t believe how many people are interested in this spat between he and Ramsey, and soon he has a ton of followers. That’s when Casper decides to throw down the gauntlet and challenge the critic. He tells Ramsey to come back to the restaurant and that he will make an amazing menu along the lines of what he wanted to do the first time. It’s a great setup for that kind of exciting scene that other movies would have started their movie with. Here, Casper is very excited about the opportunity to get a second chance, and that’s when Riva walks in and again tries to shut it down. Only this time, Casper won’t accept it. Instead, he quits the restaurant, right then and there. But after he leaves, Casper comes back into the seating area and confronts Ramsey face to face, with customers taping the whole scene with their phones and posting it onto You Tube.

After this mess of a situation, Casper needs to get out of town. The restaurant and his life are in California, but he goes down to Florida to meet with the ex-husband of his ex-wife. This man is played by Robert Downey Jr. who really only has this one scene, but completely knocks it out of the park. Downey is playing a guy who is sleeping with his secretary, and she has just found out that she is pregnant. Only Downey is convinced the baby is not his and he confides all of this into Casper, a man that he barely knows. Every time Casper tries to talk business, Downey changes it back to his personal situation, wanting to hear advice from Casper. It is an absolute gem of a scene.

Downey Jr. gives Casper a truck that he can convert into a food truck, and just like that, Casper is ready to work. He spends the next portion of the film with his son, cleaning and fixing up the truck. Leguizamo shows up, having quit the restaurant too, and wants to work with Casper. He helps get the stove lifted into the truck and then takes the vehicle to get painted. Meanwhile, Casper’s son is busy too. He starts taking short videos and edits them all together into one lengthy film that he calls “one second every day.” He then posts this online, chronicling the origins of their food truck business, and gets a ton of followers.

There aren’t many scenes about actual food and recipes and strategy in this movie, and that’s unfortunate because there definitely could have been. But instead, their our conversations about taking pride in the food. When the men who lifted the stove into the back of the truck are promised free sandwiches, on of these sandwiches gets burnt. Casper’s son takes the position that it’s okay to serve this since the guys aren’t paying for the sandwiches anyway. That’s when Casper explains that the sandwiches are about more than money. They about his legacy and reputation.

As the business really gets started, the food truck drives back home to California and becomes a big hit. That’s because the son has posted his video and also posts the location of where the truck will be at any given time. People come out to find and support them. All of his is nice and fun, but it’s in no way suspenseful. There’s never any tension or doubt in the second half and that becomes a problem. The first half of the film (well, thirty minutes or so), were great because there was a lot of friction between Casper and his boss in the kitchen. Once the food truck business gets started, however, there really isn’t any more conflict left

The movie does supply a sort of resolution with the food critic from earlier on, but this is forced and tacked on to the point where they are clearly trying to pretend that this was an ongoing conflict throughout the film. It wasn’t We haven’t heard from the critic since we left that restaurant, and so brining him back for the ending might be nice, but it is hardly the conflict of the second half of the film.  Aside from not having any real tension, suspense, or conflict in the second half, the movie also doesn’t have any romance or new revelations. There are moments where Casper and his ex-wife give us the clues that maybe something else is around the corner (the accidental telephone “I love you’s”) only nothing comes of it. I understand that they were making sure to not force the unrealistic romance on us, but there needed to be something. Especially since there really wasn’t any conflict. The movie is good and creative and unique, but it was definitely more exciting at the beginning than at the end and that is not the way and movie want to be.