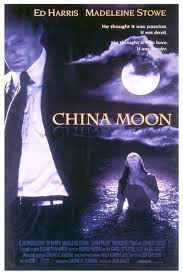 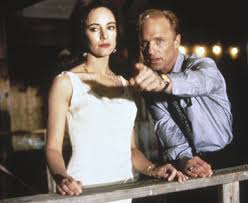 A decent film noir, meant to be similar to double indemnity, where it takes half the film to get going, but after that things start to get pretty heated up.

China Moon is a police investigation film where the lead detective is also the lead suspect. It’s a plot that’s been done a thousand times before. The idea is, who better to be set up and have the rug pulled out from under him, then the guy who goes in thinking he’s seen it all? He’s supposed to know every trick in the book and yet somehow he gets blindsided and framed for murder. Just recently I saw the new Matthew McConaghey movie, the Lincoln lawyer, in theaters, and it was the same thing. The same basic format. That time he was a lawyer, not a detective, but otherwise, same difference.

It’s what film noir’s are all about. Ever since double indemnity had man help out a married woman in killing her husband and then be surprised as things came together to look like he did it. How can someone who is such an expert, who knows exactly what he’s doing, still make mistakes? In china moon, there is a legitimate explanation for how Ed Harris’ detective Kyle Bodine has the wool pulled over his eyes.

The movie begins with him and his partner, Lamar, (Benecio Del Toro in one of his earlier roles), cracking down on a murder case. Kyle in particular is able to figure out exactly what happened and to predict who to pick up and what he’ll have on him. And he’s right about all of it. The commentary between he and his partner as they walk away from the scene deals with how these murderers are so stupid that they think they can get away with it. Everybody screws up.

Kyle and Lamar go off to have drinks somewhere and Kyle spots a beautiful woman, named Rachel Munro, (Madeline Stowe) sitting alone at the bar. He follows her outside and strikes up a conversation. Then he gets a copy of her credit card receipt from the bartender and starts finding out about who she is.

He approaches her on the street and they talk some more. He gives her his number and soon she’s calling him at work. And just like that, they start having a steamy love affair. This is meant to be similar to body heat, making film noir not just about the crime, but also about the sexual setup. The climactic moment of this Seduction comes when the two of them spend an evening out on the lake (talking about the china moon, which looks like a big plate of china, and how people do crazy things when that moon is out). They take off their clothes, jump in the lake together, and the rest is history.

Kyle and Lamar are called to Munro’s house a few times to check out domestic abuse charges. Her husband is a real asshole and he does throw her about, and Kyle and his partner wish there was more they could do about it. As if that wasn’t enough, the husband is also having an affair. Rachel is aware of it, and even has pictures.

It’s about here that we reach the halfway point and watch as Rachel shoots her husband. We saw her buy a gun earlier, and so this murder scene was always inevitable. She calls Kyle into the house and he helps her clean everything up. And now he’s in it too.

The rest of the movie concerns the police investigation of the murder. Right away it looks like Rachel didn’t do it because she was out of town, staying in a hotel somewhere far away. Instead, the police believe it was one of her lovers who did the murder for her. They take the bullet from the body and measure it and it happens to be a .38, the same kind of bullet that Kyle uses in his gun.

This is a point of confusion for Kyle, since he took the gun from Rachel after the murder and saw that it was a different caliber. How did the gun and the bullet change? Is she setting him up? That’s what it looks like. Especially since the two of them had a big conversation earlier in the picture about what kind of gun he uses and where he keeps it and everything.

As the movie goes on, the world starts closing in on Kyle. That’s when he gets to really shine as detective and put the pieces together. I love how the whole mystery gets resolved with real clues and conniving plot twists. There are moments of looking at photographs and seeing things that only a detective would notice, and the final answers really come together nicely. The movie takes a while to get going, an during that time it’s the same as any other film noir in the world, but once the mystery breaks, it’s a whole different game. The crime and the case that follows it are exceptional as is the way our hero finds himself being suspect number one. And the resolution of it all is equally smart. The first half is lacking, but the second half certainly makes up for it in a major way.