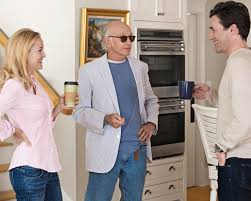 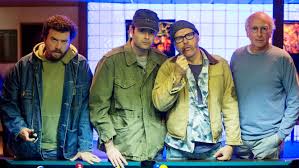 A very funny movie, with humor that is right along the lines of seinfeld and curb your enthusiasm, and a crazy plot to go along with it.

This is a pretty great movie, exactly like a two-hour episode of Larry David’s HBO television show, Curb Your Enthusiasm. David is basically playing himself here, or at least the same character he plays on Curb. He complains and finds problems with nearly everything and goes on rants about the way society works and the ways that it should work instead. The story is a little more consequential than anything in Curb, and that’s only because this is a movie, and has a finite ending. But the humor, and many of the situations are right out of that show or Seinfeld. The overall storyline is funny, but also somewhat routine in it’s take on a heist / low level criminal activity situation. Still it’s very funny, and also pretty smart.

Clear History is a great movie for anyone who liked Curb Your Enthusiasm, the Larry David, HBO television show. If you don’t like curb, you won’t like this movie. It’s really as simple as that. The movie is basically a two hour episode of curb with a little more risk taking as far as it’s plot (Larry David on curb can never get involved in criminal activity because of where that would put the remaining episodes of the show.) But the humor is all curb, one hundred percent of the way.

That’s because the movie not only stars Larry David, but was also written by Larry David, for the network that produces his television show. They clearly gave him complete control of this film, because the character looks and sounds exactly like Larry. All of the conversations and complaints he has are right out of curb or Seinfeld, the show that Larry wrote before he started making curb.

the story is about a man who was on the brink of success, having a ten percent interest in a company that was about to make billions, when he blew the whole thing. larry’s character, nathan, is a marketing executive at a new and innovative car company. this company is about to produce the howard, a new kind of electric car with a tremendous battery life. there will be no more paying for gas with this thing. and larry freaks out because he doesn’t like the name “howard,” and quits.

this is clearly a bone headed decision, which is where the title for the movie comes from, and larry goes out to dinner that night with his wife and friends, to pretty quickly realize his mistake. they laugh at how stupid he could be, and his wife insists that he go back in the next morning and try to reclaim his job. and so he does exactly that, both apologing and claiming that he made a huge mistake. this is all right out of seinfeld, with george quitting his job, realizing his mistake, and then going in on monday morning, pretending that the whole thing never happened.

there are other situations that are right out of seinfeld too, such as george telling a woman she can do better than someone else, or jerry telling uncle leo he should break up with someone, only to regret it, and the next day tell the character the opposite advice, claiming that the first conversation was wrong. this is all larry david humor. when it’s not this laughing at how stupid larry is, it’s watching him find ridiculous complaints. when he meets his boss’ nanny and son, for example, instead of talking to the son, all larry cares about is how many times a week the nanny uses shampoo. at a diner, he finds complaints about the way the silverware is laid out on the table.

but the whole movie is not complaints. if it was, it would get very tiresome. instead, it’s a combination of complaints, interesting conversations and rants, and a very funny and ridiculous plot. as far as the rants, larry goes on one about the nature and sincerity of an apology, and jb smoove (leon from curb) is in this movie, going on a number of rants of his own. smoove is basically reprising his curb character her, with his theories on society, and has a great one aboout cuban women, and then another great one about black and white midgets (almost on par with the black and white midget rant from in bruges.)

the story itself is about nathan three years after he quit that job and moved on. he now lives in martha’s vineyard and looks like the larry david we are used to (in the opening scenes at the car company he had a beard, mustache, and long hair.) nathan got a lot of backlash after the car company incident, and even had to change his name. he now goes by the name rolly. and everything seems great for him until his former boss, will, (John hamm) who basically fired him, not letting rolly have his job back, shows up on martha’s vineyard, buying a giant house.

rolly is so bitter about how this man ruined his life, that he suddenly comes up with a plan. he will blow up will’s new house. that means he has to infiltrate the scene, getting hired as a construction worker, in order to be an inside man on the job. it also means he has to recruit other workers who will help him blow the place up. he goes through his good friend, frank (danny mcbride), to find those guys and ends up hiring michael keaton and bill hader. what a star studded cast.

aside from all of those guys, there is eva mendes, amy ryan, liev schreiber, kate hudson, and phillip baker hall. it’s like everyone wanted to be a part of this film, and larry david found room for all of them. when he poses as a construction worker, and has to put a swing set together, it is absolutely hilarious. just like larry trying to sell cars on curb, or george trying to drill through concrete on seinfeld, this is a guy who clearly doesn’t know what he is doing and has to pretend as if he does. i love when he tries to explain what things mean on a heater control pad to kate hudson, and then when she uses larry’s fake terms to shout at phillip baker hall later on. his questioning of what the hell she is talking about is just brilliant.

there is so much to like about this movie. for one thing, i love how the coming attractions and promotions did not give away what the movie was really about. we saw larry in the first ten minutes of the movie, blowing his deal with the car company, but that’s about it. we never even learned that will was moving to rolly’s new town or that they would ever see each other again. i wish more movies employed that kind of secrecy approach. the movie also goes in a really cool and unexpected direction at the end, having character who seem like villains not be villains, and relationships that seem like they are ready to work, suddenly not work at all. with all that going on, there are still some things left to be desired. the plot about a bunch of idiots planning and low level caper has been done before, like in woody allen’s small time crooks. and the movie is a little too reliant on larry david’s humor. there’s just one too many rants here, like when larry tries to explain to a detonator dealer how to haggle over pricing. the movie is very good and very funny, but it does leave a little to be desired.