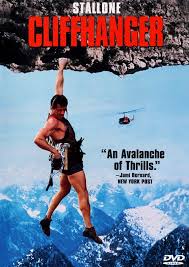 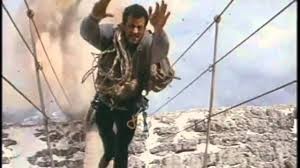 It’s Die Hard in the mountains, with great scenery, but a B movie feel.

Cliffhanger is a pretty cool movie. It’s not the smartest or most creative thing out there, but it is scenic and fun and has that complete die-hard feeling. Only it takes place in the mountains. Maybe the reason for that feeling is because the movie’s director, Renny Harlin, had just made Die Hard 2, a few years earlier. Harlin is not a great director, but he does action pretty well. His best outing to date is the long kiss goodnight, which actually went for a creative storyline. Cliffhanger, unfortunately, follows a predictable path. But the action is what counts here, and in this movie it’s top notch.

The film has an amazing opening sequence. It’s actually the best sequence in the entire movie. Long before we meet the terrorists or high-tech thieves of the sky, we are with sly Stallone (Walker) and his friend Hal (Michael Rooker). Hal has brought a girlfriend named Sarah up to the highest peak in the Colorado Rockies, known as the tower. Walker and his team have come to help them get down. While the others take a helicopter up, Walker climbs it. Watching him from a moving camera that swoops over the mountains, gives us some stunning visuals to open up the movie.

Walker reaches the two lovebirds and connects a line from one mountain to the other, so that they can all zip line across and slide into the helicopter on the other side. However, when it’s Sarah’s turn something goes wrong. The movie takes it’s time with this scene, having Walker get out there on the line to try to help her, and the longer it goes on, the more scary it becomes. The scene ends badly for every character involved, and the results will be traumatizing to how they continues after this.

Following that breathtaking and horror-stricken opening, we are in the sky with our terrorists. We’ve seen Die Hard on a train (Under Siege 2) or on a bus (Speed) or on a ship (Under Siege, Speed 2) or really anywhere else before. We’ve even seen it on a plane (Passenger 57, Executive Decision). However, this movie doesn’t want to be another terrorists on a vehicle film. The thieves do attack in the air, but it ends up being one small part of the movie. The actual attack is cool, and then the rest of the film follows the characters down into the mountains.

When we join up with Walker again, he is driving back into town, after having left into obscurity for about a year. I like that the events from the start of the film are not forgotten, and that all characters that were involved still have to deal with them. Walker meets up with his ex-girlfriend, Jessie (Janine Turner), who was also there that day, inside the helicopter. They talk about the issue of whether Walker should have gone out on the line or not. It’s great to here; the events of what happened debated like an argument. I think the fault lies with the person who tied Sarah in and checked her equipment, but nobody wants to say that and put the guilt on any one person.

The terrorists, led by John Lithgow’s character, Qualin, lose their three suitcases full of money, as they fall from the plane, out into the mountains. To make matters worse, one guy who was left alive in the other plane shoots at their plane and does some major damage. Now their plane has to crash land in the mountains. While they are there, they figure that maybe they can look for the money that got lost.

Walker and Hal meet up and have a few more words about what happened at the start of the film, but once they meet the terrorists, it’s time to switch gears. These ruthless killers force our heroes at gunpoint to help them find the suitcases. They have electronic trackers that will lead them to where the cases are, but they need guys who can climb to go up and get them.

When Walker escapes his captors, the real hunt begins. The bad guys are coming after him, ready to kill at all costs, and he’s trying to pick them off, one by one. From this point on, it really becomes a standard movie. Each terrorist dies is in his own way and in his own unique location. Sometimes these scenes are pretty cool, like a cave scene that involves a guy getting impaled on a hanging icicle (didn’t Bruce Willis stab a guy in the eye with an icicle in Die Hard 2, Harlin’s earlier film)?

Jessie shows up on the mountainside to try to help out and Walker and her join forces to try to escape the terrorists. Part of the fun of the movie is watching them try to find the suitcases before the villain’s do, and employ a sense of humor to anything they reach first. Remember when Bruce Willis sent a dead terrorist down in an elevator in the first die-hard movie, with a sign on his that said, “Now I have a machine gun, ho, ho, ho?” Here Walker builds a snowman and puts the empty suitcase under it with the bill that has written on it, “Want to trade?”

Cliffhanger works better than most movies in this genre because of its locations and scenery. The mountain atmosphere is amazing and Renny Harlin takes full advantage of it. We get caves, cliffs, exploding rope bridges, falling through ice, under water escapes, everything. We even get a terrific actor playing the evil villain. John Lithgow is scary as hell here, just as he should be. The premise to this movie might be pretty simple, but the opening sequence that stays with you for the entire film afterwards, gives it that extra edge. This is a fun movie that you don’t have to think much about to enjoy. The dialogue might be cheesy at times, but it’s a small price to pay for a pretty wild action film.