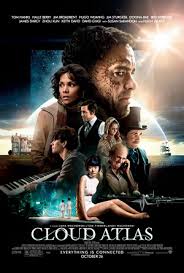 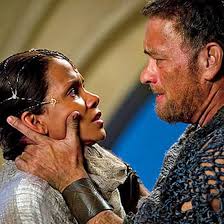 An interesting combination of six stories where you are constantly moving from one to the next, and also watching the same actors in different roles.

There is certainly a lot to like about this movie, including an incredibly creative idea that combines six different stories with the same actors playing different parts in each one. The costumes and makeup and effects are all state of the art. But it’s the storytelling that is often lacking, featuring some stories that are only mildly interesting and others that turn out to be mere excuses for big chase sequences. This is definitely a cool movie, but it’s a challenge not only to follow, but also to stay interested in. The three hour running time is a problem, and so are the six stories. less stories or a shorter running time might have helped. It’s a good movie for it’s ambition and experimental ideas, but it also could have been better.

Leave it to the Wachowski siblings to get experimental again with the future and makeup and technology in ways that are incredibly creative. These are the guys behind the matrix, and this time, with cloud atlas, they do it with all sorts of stories and actors playing multiple parts. This is absolutely one of the most ambitious movies that I’ve ever seen, but that’s not doesn’t necessarily translate to it making for a great film. The movie is certainly unique and creative, but that only goes so far.

Cloud Atlas is a film about six different plot lines that only slightly connect to each other. In fact, other than a few similarities. Such as a song that appears in different stories and is commented on by the characters, (called the cloud atlas sextet), there isn’t really a strong connection at all. I suppose the idea is that these are all the same souls in different bodies, but even that is too big of a statement and a little ridiculous when you think about it in each story.

Consider that Hugo Weaving plays a green-faced demon in one story that haunts the subconscious of a futuristic tom hanks. Maybe there is a connection between his character here and his characters in some of the other stories, but trying to figure it out is more trouble than it’s worth. Instead, the way to enjoy this movie is to just watch it and experience each story as it’s own, and then if connections happen to fall into place, then all the better. Focusing too hard on the connections, however, is a big and frustrating mistake.

There are many reasons why this movie might seem tricky or confusing. One reason is that instead of cutting between stories every once in a while or only after significant events have happened, the way most movies do, this one cuts between stories with nearly every scene. That means we only get one scene at a time of each story and are constantly being juggled around from one story to the next.

Another reason why the movie seems tricky is because every actor really is playing at least three other parts. In most cases it’s more like four parts each, and then there are some actors, like tom hanks, who appear in at least five of the six stories. What helps us follow who these characters are in each story and separate them from other characters the actors are playing, is the incredible makeup. It really is terrific here, making familiar faces into sometimes unrecognizable ones.

While it might seem like too big of a challenge to follow all of this (especially with it’s three hour running time), the truth is it’s really not that bad. The trick is to imagine each story as one actor’s plotline. So there’s the Jim Sturges story, for example, about a sickly man traveling by ship and visiting a plantation during the time of slavery. And while tom hanks appears in this story, (for example), as a redheaded, red-bearded mischievous character, it’s best to consider that this is surges’ story.

The Tom Hanks story is the one with him and Hale Berry in the future, as part of tribes, running from and fighting with savage barbaric men. Hugh Grant plays the main villain here, and he is monstrously scary with his war paint on. Aside from these two stories, there is one about a composer who is gay and writing letters to his long lost love, and then one about a book publisher whose client has just written a best seller, but is now in prison. This is Jim Broadbent’s story, and while tom hanks appears in one memorable scene as the client, throwing a man off the side of the building, Broadbent is clearly the character that carries the story along.

There are two other stories and they are probably the two better ones, although none of the six is anything special. There’s the story of hale berry as a news reporter who comes across an older man caught in the middle of a conspiracy. They meet by random in an elevator that breaks down, and she gives the man her business card. He calls her when things seem strange around him and he senses that he might be in danger. That’s when berry shows up at his hotel right as the old man is being murdered. She walks into the room to find his dead body on the floor. The rest of the story becomes a chase between her and the old man’s assassin (played by Hugo Weaving.)

The best story of the bunch is the one that takes place in a futuristic Korea where the characters look like humans, but are actually grown and fed to each other. One of these artificial creatures is turned onto the idea that she can escape the system and rebel. That’s exactly what she does, and like the hale berry reporter story, the rest of this one becomes an ongoing chase. This is the story that is the most like the matrix, (waking up and realizing you are a robot, part of a phony world, and trying to escape it), and it works because the ideas of the future and inventions and weapons are all really cool.

While there’s a lot to like about this movie, starting with the ambitious idea to make such a unique vision, there is also a lot that doesn’t work. The effects and makeup are all spectacular of course, but the stories aren’t really as interesting as they should have been. Consider that the two, which are the best, really boil down to being not much more than elaborate chases. If the stories were better, this could have been a more interesting film. Instead, it gets tiring. The three-hour running time might be necessary to tell all six of these stories, but maybe the movie should have been cut down to four stories instead. This is definitely a creative film, but there are lots of factors, which hold it back from being great.