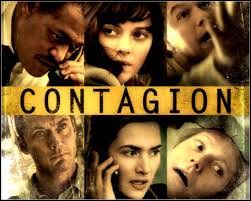 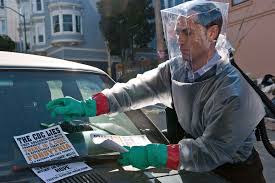 A different take on the situation of outbreak, that is more realistic, but at the same time less cinematic.

Contagion is the Steven Soderberg version of outbreak, Soderberg is the guy who, when he’s not making ocean’s eleven movies, likes to make mega-cast large scale pictures that cover a topic from all angles. It’s what he did with Traffic and also with Full Frontal. He has characters on all different sides of the subject matter, or industry, and treats his film almost like a documentary. He’s not interested in Hollywood storytelling, but in what things might look like if the subject of his movies were to really take place. As a result, his movies might be detailed and realistic, but they are not always cinematic.

Contagion is a prime example of this. Whereas outbreak told the story of an unknown deadly virus and gave us not only fear and paranoia, but also good guys and bad guys, (offering up Donald Sutherland as the military general villain), contagion does nothing of the sort. It deals with the paranoia on the streets, sure, but it takes the stance that the virus is the only bad guy out there. The rest of us are all on the same side against it.

The movie begins with one of the first victims of the disease, Gwent Patrow, coming back from Hong Kong and feeling like maybe she just have jet lag. Turns out to be a lot worse. She takes it easy around her house; lying down as often as she can and allowing herself to be taken care of by husband matt Damon. Only when she goes into shock while standing around in the kitchen, there’s little he can do besides drive her to the hospital and wait.

Patrow is the first American victim, but there are many more to follow. Matt Damon’s character, Mitch, must scramble around trying to take care of his other family members, most notable his son, who seems to also have contracted the disease. Luckily Mitch is immune to it. His story is especially interesting because it involves his wife having had an affair and the way that Mitch finds out about it. But he is just one of the many characters featured in this movie and a supporting player in the grand scheme of the film.

Other star actors on board here include Kate Winselt, Laurence Fishbourne, Jude Law, and Marion Coutillard. Fishbourne and Winslet are the doctors trying to do tests and interviews and make sense out of what’s going on. They fly from place to place, trying to get information quickly and follow up on patterns. Each of their stories takes an unusual twist with what ends up happening to them and their families. Fishbourne’s wife to be finds herself the victim of people who desperately need medicine. And Winslet gets much more than she bargained for.

Jude Law, meanwhile, plays a blogger, who is supposedly the spokesman for the people. He blogs about not trusting the government or the doctors and about how they are not telling us everything we need to know. The people look to him as their savior, considering him the only one they can trust, only he is also causing much of the panic and hysteria with each of his blogs. At one point, the government decides he is doing more harm than good, and makes a point to let him know.

Marion Coutillard plays another doctor who is more of an overseas representative. She’s the one who is trying to trace the virus from one country to another to figure out where it came from and how it got started. Like Fishbourne and Winselt, she finds herself getting placed in a situation she has no control over and becoming a victim to people in need as well. With her, it is a village in need, and they decide that she is their best chance of getting help.

The movie starts off with the bang of Paltrow’s death, but after that it starts to slow down. The first half becomes more about the information and politics than about anything exciting. Once the deaths start piling in, however, the intensity of the film gets ramped up. All of a sudden we are watching all different kinds of tragic situations.

Every one of the main characters ends up in conflict, and for most of them these conflicts are very different, although all caused either directly or indirectly by the outbreak of the virus. I like that this movie tries not to hold anything back and to show us that even main characters can become victims. There are no happy endings here.

I also like the way things get so out of hand that society basically turns to anarchy. People start rioting stores, grabbing whatever they might need to survive, and the streets turn to something that looks like a war zone. Jude Law walks around wearing a homemade costume that looks like a spacesuit, but it keeps him well protected and is pretty funny to look at. The movie could have used some more excitement in it’s first half, but once things start to pick up, the movie continually delivers the whole rest of the way through.