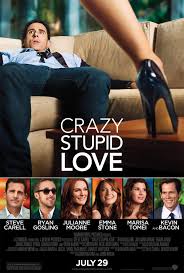 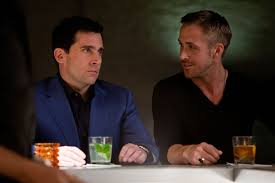 A funny, enjoyable, and even clever romantic comedy.

Crazy, Stupid, Love is a movie with some great ideas and a terrible title. That title is very generic and is the kind of thing that can just be thrown over any movie that has something to do with romance. It’s a situation where clearly they couldn’t come up with a good title until the movie was made and so just threw that one on at the last second. So what? The movie is good and that’s what counts.

It’s a movie about a couple that is getting divorced. Julianne Moore plays the wife to Steve Carrell’s husband. She breaks up with him and has already slept with someone else by the time she tells him. And so he moves out and starts to learn how to live as a single man again.

This is Steve Carrell’s movie. His character, cal, is either the focus or at least a significant part of every story. And there are really three stories here. There is of course the story of cal and his wife. But then there’s also the story of young Ryan Gosling and his relationship with Hannah, played by Emma Stone. Cal fits into this because before meeting Hannah, Gosling’s character, Jacob, is his teacher. He and cal become friends as Jacob mentors the man back into manhood.

And then there’s also another story involving cal’s son. The boy is just thirteen, but believes he has found his soul mate, and that it is his babysitter. The problem is, the babysitter has a crush on Cal. she even takes provocative photos with the intention of sending them to him. The son tries everything he can think of to win his babysitter over, including putting on public displays at school. In his class, they are reading the scarlet letter, and that story is mentioned a lot here too (funny because that story was mentioned a lot in another recent Emma Stone film, easy a). Here, The Scarlet Letter isn’t used as a parallel story similar to this one, like the way it is used there. Instead, it is only used here because the star of the movie, Demi Moore, is married to the much younger, Ashton Kutcher in real life. And the son in this movie hopes to use that info to help him win over his older babysitter.

For much of the first half, the humor comes from the Jacob and cal story. Jacob is a fun teacher and cal is, of course, kind of pathetic. Jacob takes him clothes shopping and then has cal sit at the next table in a bar, listening to the way Jacob effortlessly picks up women. When it is finally cal’s chance to try it, he does everything that Jacob told him not to do and it still works. He ends up taking home Marisa Tomei.

The second half of the movie suddenly starts to concentrate on Hannah and Jacob. That’s because for the first part of the movie Hannah was in a relationship with a man she hoped to marry. She met Jacob early on in the film, but nothing came of it at the time. Now, after things end badly with her boyfriend, she is ready to start something real with this new guy. And the two of them have fun together. I love how she asks him what his big move is and he tells her. He even brings her back to his apartment and shows her. And it’s not even a sex thing, but just something that is kind of funny.

One thing that makes this movie work is that there are so many different relationships and plot lines. Yes, the cal and Emily (Julianne Moore) story is at the center, but there is a hell of a lot that surrounds them. And it is all given real screen time. We don’t just get to know the babysitter, for example, but also her parents. And we get to know the guy Emily slept with who works with her. There’s a great scene between that guy (played by Kevin bacon), and the son, when the boy comes to visit his mom. Bacon meets him and then walks out of the room, but you want him to come back. You want to see what would happen if the two of these characters actually spoke to each other for more than a second. And so he turns around, walks back into the office, and we get to see exactly what we were hoping for.

I like that the movie also takes place in all different locations representing very different worlds of the characters. For Emily, we are always around the office. For cal and Jacob, we are constantly in this one bar that they both happen to like a lot. And for the babysitter and the son we spend a lot of time in school with them. We watch the son in class having problems with his teacher and we watch the babysitter consulting her friend at their lockers for romantic advice.

Another thing that really works is just how many threads this movie has going for it. And even more than that, the way they intertwine and get entangled with each other. Just the idea that the boy likes the babysitter, but the babysitter likes the father, is pretty funny alone. And it is carried on throughout the film. There are also quite a number of other entanglements, most of them surprises that rocket this movie from enjoyable to suddenly a lot of fun.

Part of the appeal of crazy, stupid, and love is the casting. I’m not a huge fan of anyone in this cast except for Steve Carrel, but boy is that guy good. He is a smart comedic actor who really understands how to deliver a punch line and has comic timing down to a T. And he happens to be very good in nearly every movie he makes. I thought this movie would be similar to his film Dan in real life, which was a movie that I enjoyed. This one is even better. Aside from Carrel, Ryan Gosling is also pretty great here, playing Mr. Cool. And Emma Stone is growing on me more and more, especially because she appears in so many good movies. From Super bad to Easy A, she knows how to pick smart roles. The same goes for Julianne Moore. Last year she carried the kids are alright to huge success, and that was the kind of movie that could have easily not worked at all. But she was able to take the material and make it work beautifully. Crazy, Stupid, Love definitely did a great casting job, all the way down to the smaller roles, like the babysitter’s father (Norm from Fargo, and the head guard from Shutter Island) to Kevin Bacon as Emily’s lover.

The movie works because it is smart. It’s got great comic moments and some clever situations, but aside from that it’s got eye-popping twists. Characters turn out to be more than whom we thought they were and to fit into the plot in ways that we never saw coming. Especially not in a movie of this genre. That’s what makes Crazy, Stupid, Love so special. It never settles. It never feels like it can just do the minimum and is okay, and instead keeps striving for more. And even when things are going just fine, it comes up with bigger and greater ideas that are all the better because they are completely unexpected. For example, we get two climaxes here. This movie just doesn’t want to settle. It wants to keep going and to keep its story moving as long as it needs to. This is a very funny film that flies in under the radar and comes out a real winner.