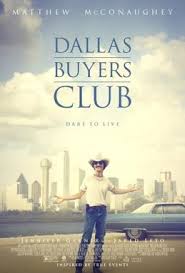 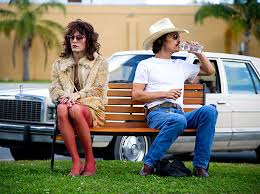 Definitely interesting, the movie does feel a little long towards its end, but otherwise is a pretty compelling film.

A very good movie, this one is interesting the whole way through, as a man goes through some serious life changes once he learns that he has AIDS. Ron Woodriff is very homophobic at the start of the film, and it’s amazing to see how far he gets away from that as the movie goes on. This is a guy who learns to change his ways, and to stand up to the system in order to get better. There’s a fascinating plot involving the F.D.A. not approving the kinds of medicinc Woodriff needs and what he does about it. the performances are terrific here, and while the movie does get a little slow by its end, it is still a pretty compelling movie.

There’s a lot to like about Dallas Buyers Club. For one thing, it’s got a fascinating story. It’s about a homophobic rodeo horse rider who gets aids and has to deal with a major change of lifestyle. When he can’t get the medicine he wants to use, because it is not F.D.A. approved, he goes down to Mexico, gets it for himself, and then decides to sell it in the United States. That’s some pretty wild stuff. Especially when dealing with the corruption of why the F.D.A. wouldn’t approve a drug that they know is helping people.

But aside from the story, there are also the performances. both Matthew Mcconaghey and Jared Leto are on their games here, doing knockout acting jobs. Mcconaghey in particular, is really going against the grain of his pretty-boy image to delve into some dark corners of a man facing death. it seems the Oscars always go for extreme roles, whether it’s someone playing gay (Harvey Milk), or ugly (Charlize Theron in monster), or just a real person (Capote, or any of the above.) in Dallas Buyers Club, Ron Woodruff (Mcconaghey) fits all of these categories, but the main thing is that the actor really presents a portrait that, is vastly unlike himself.

when we first meet woodriff, he is under the bleachers at a rodeo, in one of the horse pens, having sex with two women at once. he’s looking out at the rodeo from this dark hole, where he is hiding from the public, and it’s clear that this is a man who has made sex his priority in life. this is a man who would easily take the risk of having unprotected sex if it meant getting with two beautiful women at the same time. the fact that he’s doing it at the rodeo, in an area where he is so close to the public, where if that door swung open everyone in the crowd would have a view of his actions, shows what a risk taker he is. this is the kind of guy who enjoys the prospect of getting caught and being daring enough to put himself into a situation where that could happen.

of course, woodriff doesn’t know that this can lead to aids. if he heard it before, then he never took it to heart, believing a word of it. that’s the other thing about his character. he’s not very smart. he’s the kind of guy that runs with a group of friends who stick to what they believe without ever taking a moment to try to find out whether or not any of it is actually true. when woodriff is first told that he has aids, he thinks the doctor is calling him gay. he’s ready to fight the doctor, right then and there, thinking the man is insulting him. he has no idea that you can get aids from having unprotected sex.

his friends aren’t much better. in fact, they turn on woodriff the moment word gets out that he has aids. woodriff tells his best friend over some beers in his trailer home and the next thing you know, his friend has told all the guys they hang out with at the local bar. when woodriff shows up to have drinks with his buddies, he finds out pretty quickly that they aren’t his buddies anymore. like him, they think the only way to get aids is from being gay, and so they assume that woodriff is gay and let him know it.

after all the dust is settled between woodriff and the community that he once called a group of friends, and he has realized that he’s pretty much on his own, he decides to figure things out for himself. the doctor tells him that he has thirty days to live, and for woodriff, this is unacceptable. he starts talking to the transvestite who is sharing the hospital room with him and learns that there are other kinds of drugs that the hospital is not offering, and that you just need to find a loophole way of getting them.

the reason why the hopsital isn’t offering these pills is because they haven’t been approved yet. the reason why they haven’t been approved has to do with the politics of the big pharmacudical companies possibly paying the f.d.a. off to speed up their reviews of the medicine they want to be prescribed by doctors. but the hosiptal does have samples of these pills in storage. in fact, they are running tests on them, having people volunteer to take them, and that’s exactly what rayon (jared leto, playing the transvestite) is doing there.

once woodriff finds out about all this, he starts paying off a guy who works in the hospital to get him the pills. suddenly he starts feeling a whole lot better. the doctor’s claim that woodriff will only live for a month proves to be completely incorrect. maybe the doctor was just making the claim based on the pills he knew he could offer woodriff. only woodriff found another way, and all seems to be working out until the hospital employee tells woodriff he can’t get the pills anymore. instead, all he can give him is the name of a doctor down in mexico who might be able to help him.

woodriff goes to mexico, meets the doctor, and the rest is history. suddenly he’s in business with the doctor, smuggling the drugs across the border and selling them to aids patients here in the states. rayon becomes his partner, since he has the connections with clients, knowing lots of people who have aids and are looking for something that can help them. that’s when woodriff has a loophole idea of his own. it’s illegal for him to sell the drugs, but if what he sells is a membership to a club, that might actually work. the club is called the dallas buyers club, and people buy a membership to it, which entitles them to a certain amount of pills each month. so they aren’t directly buying the pills, but buying a membership instead.

the second half of the movie is filled with conflict from both the f.d.a. and also the doctors board at the hospital. jennifer garner plays eve, a doctor who is caught between her employers at the hospital, and this buyers club, which she knows is helping people and is the right thing to do. she gives the third great acting performance of the movie, and for garner, she has never been better. unfortunately, the conflict isn’t as exciting as it should be, and the movie doesn’t really seem to have a climax. it doesn’t build up the way it should and instead, seems to drag on a little towards its end. maybe if the movie had been a little shorter or if it had just built up to something big, this could have all been avoided. even still, it’s definitely an interesting film, and an entertaining movie.