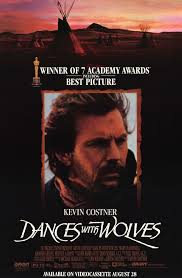 The ultimate version of the outsider mixing in with a new people story, told with detail, build up, and emotion.

Dances With Wolves is a lengthy movie that tells a somewhat familiar story, only it tells it in a way that’s far more complex, detailed, and honest than anything we’ve seen before. Despite having seen numerous others takes on this tale of an outsider mixing in with a unique people and even becoming one of them, this is the definitive version. We’ve seen this story set in feudal Japan times with the last samurai and in futuristic other worldly scenarios with avatar, but never told in as realistic a fashion as this.

The movie stars Kevin Costner, in what many consider being his best movie of all time. It was certainly made at the height of his career. He had field of dreams (what I consider to be his best movie), the year before this, in 1989. And then the year after it, he had Robin Hood: Prince Of Thieves, in 1991. Those three movies in those three years are what made Kevin Costner. He’s never made another movie that matches up to any of those three (although I suppose Thirteen Days came pretty close.)

Costner plays lieutenant Dunbar, a man sent to the frontier of America right after the end of the civil war. It’s the 1860s, and Costner rides out to a post in secluded territory. The man who sent him there killed himself just moments after sending Dunbar on his way, so that nobody was told that he was going out there. And the man who accompanies him, drops him off at the post, turns around to ride back, and is killed shortly after by savage Indians.

And so Dunbar is there, at the post, all by himself. He waits for backup to arrive; only it never does. And so he makes a life for himself out there. There are large portions of this film that feel like cast away or I am legend or any movie where it’s the main character all by himself for long periods of time. But then he meets up with others and those feelings of solitude are forgotten.

For Dunbar, it is a very gradual infiltration into the camp of the local Native American tribe, the Sioux. First it’s a single Indian who comes by his post and snoops around. Dunbar scares him off pretty quickly. And then it’s some Native American kids who come by night after night, and mess with his home a little. Dunbar decides he needs to do something about it, and so he rides into the Native American camp.

As he gets closer, he comes upon a woman who is hurt and covered in blood. He picks this woman up and brings her into the camp. Once there, crowds of Native Americans surround him and none of them are especially friendly. Dunbar sets the woman down and tries to explain that she needs help, but he can tell these people are not ready to befriend him yet, and so he leaves. Some Native Americans evens show up at the scene ready to fight and are told by others to stop because Dunbar did not come here for that.

After that, two of the Native Americans come over to Dunbar’s post and sit down with him and here where the real communication begins. They try to understand each other’s language, which is quite a challenge, and to at least show that they mean each other no harm. Dunbar now slowly starts making his way over to the Sioux camp more and more often. He even spends some nights sleeping there.

And then, one very significant event brings him in for good. That event is his finding of a buffalo heard. It’s as simple as that the herd passes by his post first, and he runs off to tell the Sioux. They all get ready quickly and chase after the herd, and suddenly he is one of them. The man who brought them news of the herd. A local celebrity to these people.

That’s at least half of the movie right there, of him gradually working his way into their tribe and establishing a relationship with these people. The second half has two major plot points. There’s his relationship with the woman he found, called “stands with a fist.” and then there’s the encounter between he and the American soldiers that finally do arrive at the fort. The romantic story turns into a marriage and really makes Dunbar a full member of the tribe who speaks the language fluently and all. And then the American soldier subplot brings the movie full circle as for the first time since the beginning of the picture, we are back with some Americans, and see which side Dunbar feels he belongs with.

I like that the movie didn’t really dwell on this question, and that for Dunbar it was a no brainer about where he belonged. That same ending was presented in both the last samurai and avatar, only in those two movies; the hero had more connections to the opposition because he used to work with these exact people who are now against him. With Dunbar, he doesn’t recognize any of the Americans who come, and that’s both a good thing and a bad thing. It’s good because he feels no allegiance or conflict in choosing sides, but it’s bad because he now has to prove to these men who he is, and they would much rather brand him as a traitor than believe him. It’s a pretty fantastic movie with loads of ideas going on to easily fill up the running time. There is real understanding and emotion in this movie and that kind of authenticity and attention to detail really goes a long way. Dances With Wolves won best picture of the year in 1990, and while I don’t think it deserved to win over Goodfellas, I understand why the Academy deemed it best picture worthy. It really is an American masterpiece.