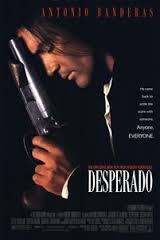 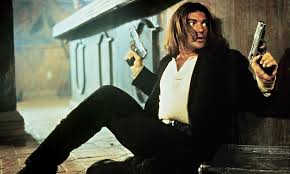 A fun and exciting action movie with fantastic humor, stunts, music, and cinematography.

Desperado is the big budget follow-up to the Robert Rodriguez independent action film with a cult following, El Mariachi. That movie told the initial story of a mariachi who came into Mexico right at the same time as a drug lord was being targeted by a former employee. The mariachi got caught up in the whole mess when he was mistaken for the employee by the drug lord’s men, and by the end of the movie; he had become a killer himself. Desperado is the second film in a trilogy that continues off of this plotline. In many ways it is similar to the first movie, and almost a sort of remake. The same bar is used for a big gunfight. The villain dresses the same and lives in the same hideout. The woman who owns her own store and comes to the heroes’ rescue is similar. And yet despite all of this, Rodriguez makes it clear that this movie is a sequel by continuing off the plot and even showing flashbacks to the previous movie.

Desperado opens with Steve Buscemi walking into a bar, sitting down, ordering up a beer and then telling a story. He tells the story of another bar he was sitting at where a mariachi walked in, set down his guitar case, and began pulling out guns. The mariachi killed everyone in the room and did it with style. We get to watch the mariachi doing all this as Buscemi (whose character is named Buscemi as well), narrates the whole scene. And what’s great is that Buscemi tells it as if the mariachi (Antonio Bandera’s) were a myth that always stayed in the shadows and moved at rapid speeds. And that’s exactly what we see. It’s not so much that the gunfight really went down this way, but that this is the way Buscemi is telling it, trying to intimidate these guys he’s talking to, and so we end up getting a fantastic, over the top, guys being blasted into the sky and out of the sky, opening scene.

The real movie then begins with credits rolling. That opening action scene was just an introduction. A taste of what’s to come. Now we see the mariachi performing on stage with his two colleagues in front of a crowd in a dark nightclub. The music is fantastic as is All of the music in this movie, but the scene also shows us that the character really can play. His guitar toting weaponry (he carries a guitar case full of guns) is not just a cover. The scene Also shows us that the character is much more human than Buscemi’s story led us to believe. This guy isn’t some mythic super hero, but a real man. When there’s trouble in the bar, he doesn’t just pull out a gun or knife and throw it at the perpetrator, but simply whacks the man from behind with his guitar and then continues playing and singing as if it never happened.

We move from this scene back to the original bar that opened the movie, where Buscemi came in to give his little monologue story. Cheech Marin is the bartender here and All the men at the establishment work for a big boss drug dealer named Bucho. Quentin Tarantino now walks in and does a little monologue storytelling of his own. He tells a joke about a man pissing on a bar, but like all Tarantino stories. He does it with great humorous detail. The story might not have anything to do with anything, but it is still a lot of fun, and Rodriguez aids Tarantino with terrific fast moving music in the background. Tarantino the filmmaker, and Buscemi the actor, are of course friends from their previous entry together, reservoir dogs. Here they get to help out Rodriguez, by both coming in, doing cameos, and delivering some fantastic monologues. These early scenes are some of the better moments in the film.

Tarantino is brought into a back room to do some business, and just after he leaves, the mariachi walks in. He sits down at the bar and puts his guitar case on a stool beside him in plain sight. Cheech Marin asks him to open up the case saying, “we’ve all heard stories of a man who goes around with a guitar case full of guns.” With this line, writer Rodriguez is adding to the mythology of the character, telling us that there is a legend out there that these men have heard about. This strategy of having the characters use dialogue to tell us just how powerful what we are watching is, is something of a Tarantino trademark (and I have no doubt that he helped Rodriguez write some of this script). In Pulp Fiction, for example, Tarantino has characters say lines like “people Always rob banks. Nobody ever robs a restaurant,” to let us know how cool it would be if we got to see a restaurant robbery, and that’s exactly what we get. Or lines like “this has been without doubt the weirdest fucking day of my life,” ushered by the Bruce Willis character, or “I’ve been through too much shit over this suitcase today to just hand it over to you,” ushered by the Samuel L. Jackson character. All of these are ways of using dialogue to manipulate the audience into seeing how huge the story is, and Cheech Marin does it for Desperado when he speaks of the legend of the man with the guitar case full of guns.

The mariachi opens his guitar case to reveal a guitar. Everybody settles down and puts down their guns, but just then, the guitar starts to flip open. This reveals that hidden underneath it is a whole supply of weaponry and suddenly everyone is on their feet again, guns in the air. The shootout begins with loud thunderous music that wails through the air as Banderas jumps around, on, over, and behind the bar. He stands on the bar firing behind his back in one moment and then slides on the bar to get at a gun at the other end, in another. It’s a fantastic scene with amazing choreography and by far the best action scene in the film. And it still isn’t over even when everyone in the bar is killed. The scene continues into the streets after the mariachi leaves and finds himself pursued by still another one of the men from a back room.

The end of the scene represents a sort of halfway point in the movie. Banderas is shot and injured and in his final moment before taking the bullet, he runs into Salma Hayek (literally). He sees her coming down the street and takes the bullet in order to protect her from getting hit by what he knows is coming up behind him. That scene not only introduces us to Hayek, who will be a major part of the second half of the film, but also shows us Danny Trejo’s hit man lurking in the background. This character will also have a place in the events of what is to come.

In the second half of the movie, we get many more action scenes, only none quite as memorable as either of the two early bar shootouts. Instead we get a scene where Banderas comes under attack by Trejo, a scene where he escapes from Hayek’s building while pursued by hit men, and a scene where he and his friends take on a small army of men who come to get them. It’s all done well and handled with creative and often humorous shots. Rodriguez is an artist and this movie shows that off more than anything else he’s done.

The cast in this movie is top rate. It is the big breakout film for both Antonio Banderas and Salma Hayek. Aside from that it’s got Steve Buscemi and Quentin Tarantino making memorable cameos, and Danny Trejo playing his signature badass hit man (which he sort of parodied in Machete). This is Rodriguez’s best film to date, with his entry the following year, From Dusk Till Dawn, coming in at a close second. Nearly everything works in this movie. Only the ending, where at an important moment everything goes white, is not handled as well as it could have been.

Overall Desperado is a truly fantastic film. The humor is around every corner and the action is intentionally campy and over the top and a lot of fun as a result. The story is relatively simple (El Mariachi was more complicated than this because it featured two heroes and not just one), but it’s all the better because of that. Rodriguez gets to conduct fantastic action scenes and set them to some amazing music. This is a really great movie just oozing with style and technique. It truly looks and feels fantastic and is a total blast.