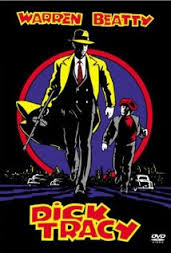 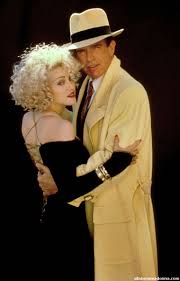 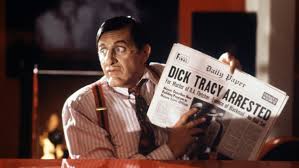 Fun and colorful criminal fare with creative villains, but a standard detective takes on the mafia storyline.

Dick Tracy is a fun, colorful popcorn flick. It’s a crime movie done as a comedy without spoofing any movie in particular, but more like doing it’s own thing. And that works. Warren Beatty not only stars in the movie, but also directed it, based on a popular comic book series. And while he goofs around with the different characters, and even some of the dialogue, he takes the violence in the movie seriously, which goes a long way.

The movie is about a lone detective who works for the police department, but seems to be a rogue celebrity cop who is known to the criminal world. In just the opening scene, when a card game turns into an execution, the killers machine-gun the words “Eat Lead Tracy,” across a wall. They know he’ll be the one on the scene and take time out to leave a personal message for him.

Tracy investigates the murders and he also crosses paths with a runaway kid (played by Charlie Korsmo, in one of his few great child actor roles.) Tracy and his girlfriend, Tess, take the kid in to live with them, after Tracy punches out the old man the kid is living with. And the comedy comes from this dynamic between the three of them. There’s Tracy trying to ask Tess to move in with him and stumbling over his words, and there’s the kid eating everything in sight like he’s the energizer bunny with a bottomless pit for a stomach.

But the real heart of the movie is with the criminal world. Warren Beatty got an all-star cast for this comic book fun. He got Al Pacino to play the head villain, big boy caprice. Then there’s Dustin Hoffman as mumbles. The three of these guys were all huge seventies icons. Aside from them, there’s also Madonna on hand as well as Paul Sorvino, William Forsythe, and a brief cameo by James Caan. The casting is fun. Especially Pacino, hamming it up better than anybody else possibly could. Pacino is a yeller by nature, even if he’s playing a more calm and quiet character. Sure he can be composed, like in The Godfather movies, but he absolutely loves to yell if given the chance, and this role in dick Tracy gives him plenty of opportunities.

The storyline is pretty simple, with big boy killing whoever he wants and Tracy unsuccessfully trying to get witnesses to tell what they saw and to testify. Big boy kills lips (Sorvino) with a concrete bath device and then Tracy finds himself trying to make sense out of what Mumbles is saying, or to get breathless (Madonna) to stop flirting with him and say she’ll testify. And none of it works.

That’s all the first half of the movie. In the second half, things get spiced up a little. First, there’s a meeting with big boy and all of the other criminals in town. The brilliantly bright colors these guys wear are a lot of fun, but by far the best characteristic about this movie is their faces. Half the villains have strange faces, from “Little Face” in the opening card game to Prune Face to The Brow. It’s like a guest table of freaks and mutants, and it’s extremely entertaining.

Tracy targets these guys and starts closing in on them because of a well-placed bug, and soon the criminals are calling for his head. The action gets turned up as they kidnap Tracy and try to kill him, and then later on as a number of cars come driving through garage doors with machine guns firing at them from the cops. That’s what I mean about well-structured action sequences instead of just throwaway comic book fare.

Also in the second half of the film, we get the emergence of a new character named “no Face.” he seems to be a vigilante making deals with big boy, but at the same time really keeping to his own agenda. And with him comes a whole new plot involving the kidnapping of Tess and a framed murder that is meant to look like Tracy was the killer. There’s certainly a lot going on here, plot-wise, and the second half seems to be a lot more packed with excitement than the first half was.

Unfortunately, things also start to get a little less interesting as the movie goes on. Perhaps Beatty realized that about his movie, and that’s why he packed so much more into the second half. In the first half of the movie, we were so enamored by the clever uses of bright colors and the creative villains that we didn’t really notice how thin the plot was. In the second half, it starts to stand out. Still, this movie is far better than the Joel Schumacher Batman films (Batman Forever and then Batman And Robin), which also tried to bring color and campiness to the comic book world. That’s because Beatty doesn’t go for stupid one liner remarks or ridiculously pointless ideas (remember The Riddle and Two Face playing Battleship?)

Warren Beatty set his movie in the colorful world of comic books where everyone dresses flashy and is over the top, but he also kept his story grounded in real criminal business. There are no superheroes here or even anything close. And the villains are mobsters who mix in with the established law, buying off the D.A. and getting alibis to say where they were on certain nights. Warren Beatty handles the acting well, especially the comedy, mainly by not taking anything too far. That’s left for Al Pacino. And boy does Pacino have fun with it. The movie definitely has it’s flaws and loses steam in the second half, despite that half being much more packed with events than the first one was. But overall this movie has a very specific vision, and creative style, and watching the pursuit of this strange agenda turns out to be a lot of fun.