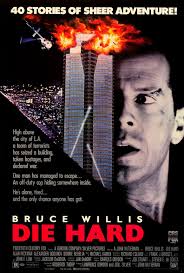 An amazing one man against an army of terrorists action movie that is loaded with thrills, but still remembers to pay attention to details.

Die Hard is an absolute American classic. It really is the movie that launched the one man against an army of terrorist’s action movie. Back in the seventies, the closest thing there ever was to an action star was Clint Eastwood as Dirty Harry. Before that it was John Wayne. But both of those guys were older men who could play cowboys, and very often did. Eastwood might have been a tough talking cop in dirty harries, but he still didn’t have that everyday quality that showed he could do a whole lot without his gun.

In Die Hard, Bruce Willis gave us that. This movie was so massive and thrilling that the next decade was characterized by movies that used die hard to help describe them. From Die Hard on a ship (Under Siege) to Die Hard on a plane (Passenger 57) to Die Hard in an arena (Sudden Death), the comparisons saw no bounds. And it all started with this film and this regular Joe of a cop named John McLane.

Part of the reason the movie was such a success was because it’s concept was so simple. Die Hard movie wasn’t about elaborate chases through a city (which Die Hard 3 ended up becoming), and it wasn’t about solving any mystery or conspiracy. Instead, it was about a guy trapped in a giant skyscraper building above all of Los Angeles as a group of terrorists took over and decided to hold the only party left in the building hostage.

And McLane spent the movie running around from floor to floor, checking out different rooms and resources. He used whatever tools were available to him to get police attention and fight back against these heavily armed terrorists. And he found a great number of hiding spots to use to his advantage when he was outnumbered or outgunned. During the course of the movie, McLane visited a ton of different floors, including the roof a couple of times, the electrical rooms, the elevator shafts, and even the air conditioning vents. This guy got into more tight spots than Jet Li. and instead of showing us how easily he did it, the way an actor like Li would, Bruce Willis showed us how uncomfortable and painful this all was. That’s what gives him that everyman quality.

John McLane is not a guy who wants to be a hero. He doesn’t actually want to save anybody. He just wants to be at home, or here in Los Angeles working things out with his wife and seeing his two kids for the first time in ages. The movie really works on multiple levels. It does an outstanding job of both presenting this character as a real person, and also showing us exactly what a person is capable of if they are pushed to it. This guy literally climbs through fans and jumps down elevator shafts, from one floor to the next.

The movie is also loaded up with small details. It’s the kind of thing where you need to be paying attention to catch how John’s wife, Holly, has changed her name on the computer, or how her coworker Ellis, has given her a watch as a present. All of these things will come into play again later on in the film. Another example of how this movie makes the small details important is how john hates flying. While on the plane at the start of the film, the passenger beside him notices this and gives John some advice. When he gets where he’s going, John should take his socks and shoes off and make fists with his toes. So John does this, once he gets to his wife, Holly’s office, and it explains why for the rest of the movie he finds himself running around barefoot.

When the terrorists start shooting the place up, John is in Holly’s office mellowing out. He is the only one who isn’t really at the party, or at least the only one who’s not there who is also quick on his feet. While others stay in the office rooms waiting to be grabbed by the terrorists, john acts fast and sneaks into the stairwell. He climbs up to a higher floor that is under construction and waits for the first terrorist to come up. When he sees this guy, he springs into action and attacks.

John kills that first terrorist by breaking his neck in the stairwell. Now he is armed with whatever weapons this terrorist had on him. But John doesn’t lose his sense of humor. He sends the dead terrorist down to the floor where the rest of the bad guys are hanging out, with a humorous message written across the dead terrorist’s shirt. And from that point on, the bad guys know that there’s someone else in the building.

This team of terrorists is led by Alan Rickman in one of the most iconic villain roles of all time. Rickman plays Hans Gruber, with the perfect English accent that just sounds so menacing when he speaks quietly and issues commands. He is pure evil in this movie, killing anyone who gets in his way or doesn’t give him what he wants. That includes holly’s boss, and her coworker who stupidly tells Gruber that he is a good friend with john.

Some of the action set pieces that happen in this movie are absolutely out of this world. There’s the bomb on the chair that John sends down to the very first floor through the elevator shaft, and ends up blowing up the entire ground level of the building. Then there’s the missile being fired at the armored car that the police try to bring in, and of course, there’s john doing some bungee jumping off the roof of the building using a fire hose tied around his waist as the roof goes up in flames behind him. Die Hard works as an action movie, but it also works as a character driven piece of blockbuster entertainment. There’s no doubt it’s a big movie where lots of stuff blows up, but it also remembers to focus on plot and details. And it gets every one of these things exactly right.