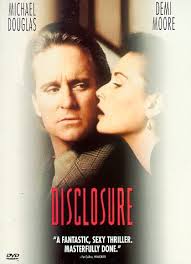 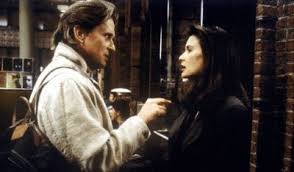 A pretty cool movie that definitely gets better as it goes on and reaches its second half.

Disclosure is a pretty intense movie. it is based on a powerful and well-written Michael Chrichton book about a man who is in line for a promotion and then gets side-stepped and ambushed by the company hiring someone in his place from another state. the man is Tom Sanders (Michael Douglas), and the woman who is hired to take the job that he thought he was in line for is Meredith Johnson (Demi Moore). She also happens to be an ex-girlfriend of his from about ten years ago. this is just the start of the complications.

right off the bat, the casting here is great. Michael Douglas has that everyman feel to him of a guy who gets blindsided when he thinks he is either doing the right thing, or being the coolest guy in the room. he perfected this kind of role in the late eighties and early nineties with movies like basic instinct and fatal attraction. here, in disclosure, he is playing a more innocent version of the characters he played in those other films, and once again, a woman is walking all over him with him never having seen it coming.

the main story here involves sanders and Johnson having an evening encounter in her office, where she comes onto him and he lets it go on for a little while before pushing her away. this becomes a scandal the next day when she accuses him of sexually harassing her and then he counters by accusing her of the same thing. the chips are stacked against him, of course, being that he’s a man and also that the situation looks as if he would have probably done it. he was angry about losing out on the job to her and thought he would go up there to her office and show her who was the real boss. that’s what his coworkers think, anyway.

the movie is very smart in that it takes most of its beats from the book, trying to find ways to work in lots of the details. it could have gone even further with this, and only hints at some ideas, but I suppose movies can never get all of the details of a book in there, simply because of time management issues. the first half of disclosure moves a little too slowly with unnecessary elements being added in that don’t necessarily add to the story or pace (a stain on Tom’s tie that he does not seem to care about and looks ridiculous with. He should have just lost the tie as soon as he noticed it.)

once we get to the encounter with Meredith in her office, however, things start to move at a nice pace. I suppose the book is really the same way. the introductions are slow, but after the big event that kick starts the conflict, the ball really gets rolling. I would have liked to see more encounters between Tom and his friends, and hearing what his friends thought of his situation. there is really just one or two, and neither person seems to be showing Tom the support that one might expect.

Dennis Miller pop up as one of these friends / coworkers, and instead of ever giving Tom the benefit of the doubt, he goes off claiming that Tom is trying to sabotage the company. he’s the one who actually tells Tom’s wife about the entire thing, before Tom does. and then there’s a woman Tom works with, Stephanie Kaplan, who is basically his inspiration in her one or two scenes, to keep his head up and not quit.

other than these small encounters, the movie is almost entirely about the hearings and work environment. Tom continues to work for this high tech company in software engineering, only he is being watched from all over the building and his access to files has been denied. still, Tom knows that he is in the right and his lawyer, played by Roma Mafia, seems to believe him.

what really propels the second half of the film along is that new twists and complications arise, such as a tape that seems like it should expose everything. only things aren’t that simple. this story still has plenty of tricks up its sleeve and in many ways the film feels like one of those seventies conspiracy movies where everyone is out to get our hero. the building, with all of its open spaces and strange layouts and glass windows, actually becomes an important part of the film, adding to the creepiness of everything.

aside from Demi Moore playing Meredith, the characters in this film that are Tom’s enemies here are also very well cast. there’s Donald Sutherland as the big boss of the company who hires Meredith and then promotes her. and then there’s Dylan baker as Sutherland’s lawyer and right hand man. these two guys together are constantly scheming and up to no good and they really convince us of how shady the whole situation they are trying to pull over Tom’s eyes, actually is.

disclosure is a good movie. it is based on a fantastic book, and unlike most movies that are based on great books, this one actually pulls off its goal. it pretty much captures the essence of the book and gets the details and plot twists just about right. that includes taking us into a virtual reality library where we get a high tech version of the scene where a character is trying to download files off a computer before his enemy walks into the room and sees what he is doing. the movie starts out a little slow, but once the pace starts to pick up it never really lets go.