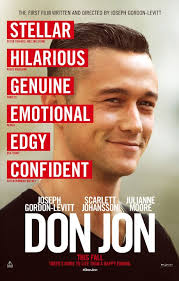 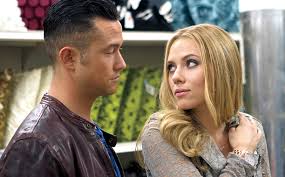 Don Jon is funny for a while, until it wears out its welcome. It’s not that we really get tired of it or anything, but that the movie changes. It has a first half and a second half that almost feel as if they are part of different movies. The first half is all about him dating Scarlet Johansen, and then in the second half, it’s onto something totally different. the first half is great. That’s where everything from the trailers comes in. the second half is fine and entertaining, but it’s just not on the same level. We end up trading humor for drama, and that’s not exactly what we expected or wanted out of this film.

Don Jon is a pretty good movie. That’s because it has some funny ideas, characters, and personalities. There’s Joseph Gordon Levitt hanging out in wife-beater tank tops, talking with a jersey accent about all the things he loves in life. This guy’s got a Saturday Night Fever kind of Italian family and is a total player. And then there’s Scarlet Johansen, also mastering a Jersey accent and showing that she can pull off the playful banter that would make this guy really be interested in her.

back in the first half, everything seems great for a while. this guy goes to clubs every night with his friends and ranks the girls they see on a scale from 1 to 10. the real storyline begins when he meets barbara sugarman. they connect at the club, but then she disappears, and it’s up to him to find her last name and her number. i like how the movie shows us these steps, including him checking facebook to find her profile.

while all this is happening, barbara is also really into the fluffy, romantic hollywood movie where the girl and guy get together and live happily ever after. she drags john to all of these movies and he couldn’t be less interested. this is another plot point that the trailer shows us, but that isn’t really explored as much as it should have been. why does she like these movies? does she realize how fake they are? John never has those conversations with her, and also never tells her how much he hates them.

there’s a great scene where john brings barbara over to meet his parents, and tony danza, playing john’s dad, is hilarious. but not long after that, they have the inevitable fight that sends them their separate ways, and suddenly the movie isn’t about them anymore. it’s about john and somebody else. an older woman, played by julianne moore. i get that the usual cliche is for john to still pursue barbara and wind up with her again at the end, and this movie wants to be different and unique. still, something just doesn’t quite feel right.

maybe it’s that moore is so much older, or that she has a sad story about her family, or that she and john are not having a real relationship, but seem to be just in it for the sex. either way, the second half of the movie basically drops scarlet johansen out of it, and that’s a big mistake. i felt like this movie was trying to leave us with the same kind of mentality as 500 days of summer did (also gordon levitt), only this one doesn’t quite work as well. that movie could have led to a sequel called 500 days of autumn. this one, who knows where it’s leading to or what happens going forward. don john has a lot of promise, but at the end of the day, the pieces don’t really come together the way they should, and it leaves us with a bad taste in our mouths. the movie is enjoyable up to a point, and then it just becomes strange.