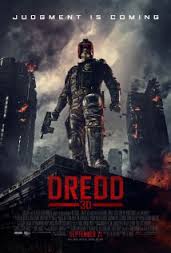 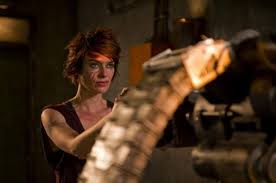 A very cool action movie, the plot might keep nearly the entire movie in one building, but the stunts are cool and the visuals are popping and electric.

Dredd is a pretty good movie. That’s impressive considering how many ways this film could have gone wrong (just ask Sylvester Stallone.) but this film has a very specific plan for how to take a stab at the hero and that plan includes combining a dark, violence filled tone with some creative visuals and a storyline that stays in one building for nearly the entire movie. Think, Die Hard set in the future. The result is a lot of fun.

Dread is a much better movie than most would expect. With the average at best cast, the no-name director, and the B movie look, this film could have easily been lousy. And it knows that going in, which means it was only made because it had a unique vision and a plan to avoid all of the potential land mines in its path. back in the nineties, Stallone took a try at bringing the Judge Dread comic book hero to the big screen and the movie was a mess. It was unfunny (featuring Rob Schneider for humor), and also uninteresting. This new film has a very different approach.

It goes for the hard R. Not hard like Punisher War Zone, where it’s gross for the sake of being gross, but more like no shying away from the violence and blood. On top of that, the film has a stylistic vision. this is what I would expect to see if Zack Snyder had made this movie. the colors, visual effects pop, and the slow motion really work. You expect the violence from this film, but not the art. it’s just one of a number of pleasant surprises about the movie.

Another is that the story isn’t half bad. it takes place all inside of one building, which is both a positive and a negative. The positive is that if done right, this could be pretty cool. By done right, I mean if they really give us a sense of the layout of the building and where everything is. If we know what the lobby looks like by heart, as well as some of the different floors. Die Hard and Clue are both good and very different examples of how to it right, staying in one building for the entire film. dread doesn’t quite get that part right.

That’s because the floors all look too similar to each other and other than when the characters go down to the boiler room, laundry room area at the end, we can never really tell where they are in the building. That ends up hurting the film a little bit, making it all feel like the same thing, and get a little tiresome after a while, but the good news is, that same thing that we keep feeling is pretty cool. With some interesting villains and twists on how to go about killing this guy, the storyline does keep us entertained.

The guy who everyone is trying to kill is judge dread, played by Karl Urban (Lord Of The Rings and Star Trek movies.) it’s a bleak, dystopian future, and the judges are the police and executioners in today’s society. They get dispatched from a central precinct and ride around on armored motorcycles that are similar to the one used by Robocop (ironically, a year or two after this movie gave us a reboot of that film as well.)

On this particular day, Dread is training a rookie, named Anderson, who has some sort of esp. she can see people’s thoughts. the two of them go to investigate a murder in a building together only to find out that it was a killing by a well-known drug organization. The leader of the gang is mama, played by Game Of Thrones’ Lena Heady. She is all scarred up and disfigured, but still somehow looks pretty good. and she is evil to the bone.

Mama has the building locked down so that a giant shield goes over its exits, including the skylight on the roof of the building. she controls the people who run security and has them call in to the judge’s dispatcher to tell her that they are just testing things in the building and to ignore all alarms. Once his radio is cut off from the outside world, Dread is theirs and they go to work searching the building for him.

What makes dread pretty cool, aside from the visuals and style, is the action. This movie doesn’t just go through the motions, the way your average B movie does, but instead, comes up with some clever ideas. sure, the choreography could have been better at times, but the weapons they come up with and how they get used are all pretty cool. At one point, for example, mama and her team load up some giant gatling gun-like cannons the size of industrial fans, and start firing them away at the other side of the building.

There are also twists in this movie. one in particular about who mama employs to come after dread ends up being a major opportunity for new action. Suddenly Dread has a whole different set of enemies. The movie never makes things too easy for him, and constantly throws obstacles in his path. Dread himself isn’t much of a character, doing a sort of Christian Bale as Batman kind of deep, gruff voice, but we learn so little about this guy that we are never able to figure out if that’s his real voice or something he came up with (the way Bale did.) it doesn’t hurt the movie that we learn nothing about dread in his life outside of this. It only serves to focus the film more on what’s happening in front of us.

Dread is a gritty action movie that manages to do something amazing. it blurs the lines between being dark and also having colorful and elaborate visuals. The way the movie does that is by maintaining it’s dark atmosphere for ninety percent of the film, and then every once in a while, sprinkled in there, is some cool slow motion, colorful image. The one that comes most to mind is when we first meet mama as she is in a bathtub, and water is splashing slowly across the screen, drifting through the air. this movie has a vision. It could have done more with clearing up for us the exact layout of the building (think about how well we knew that lobby in Die Hard,) and the action choreography could have been a little sharper at times, but other than that, it’s a pretty good film.