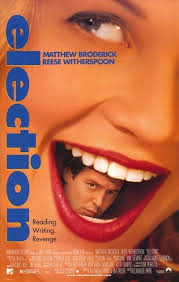 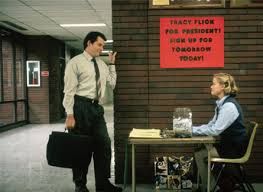 An unusual black comedy that sets itself in the realm of a high school where a teacher struggles to find the balance in his life and in a student government election.

Election is a strange little movie that is equally creative and funny. It’s the first great movie by Alexander Payne who went on to direct sideways a few years later. That might have been his best film (It’s the only movie to tackle regular guys going out to California wine country), but Election is certainly his most unique and fascinating.

The title refers to a high school, student government election. That alone should give you an idea of how much this movie is set in the real world of what could actually happen. There’s this one girl, Tracy flick, (Reese witherspoon), who is a real “go-getter.” That’s a nice way of saying she’s annoying as hell and out to be the best at everything and step on anyone who gets in her way. And she’s running for president of the student government.

Then there’s the teacher, Jim McAllister (Matthew Broderick) who is in charge of student government. He’s the guy who will have to deal with Tracy or whoever wins the election on a daily basis, working with this student to make decisions. McAllister is the main character of the movie, and he’s a sympathetic character who goes downhill during the course of the film.

It all starts with voice over and freeze frame action. The movie opens with Tracy’s voice over, and then continues into Jim’s. Later on we get some voice over of the two other students who will be running against Tracy as well. This voice-over move, combined with freeze frame that freezes the screen whenever the character that is talking to us wants to, makes it feel like this character is the one running the show. Especially McAllister, who freezes the screen on Tracey in the most unflattering poses, in order to talk to us about her and how annoying she is.

Another trick that Payne uses to give a full telling of his story from the point of view of his main character is jumping back in time. He does that at the free will of the character telling the story in order to show us the events of what went on a couple of months ago. It’s the story of Jim’s best friend, another teacher at the school, who ended up having an affair with Tracy, despite being married and her teacher. This man, who was really McAllister’s only friend, ends up getting fired and moving away from the school, to another state, to move back in with his parents.

And after that, we begin our real story, the story of the school election. Tracy approaches Jim McAllister one afternoon, about how they will be spending so much time together once she is elected, and suddenly he starts thinking. He can’t stand her. He doesn’t blame her for what happened to his friend, but deep down, she is the reason he had to leave, whether it was her fault or not. And she is just annoying as hell. So Jim gets another kid to run against her.

Enter Chris Kline as Paul Meltzer. This is Chris Kline’s best role, although it really is pretty close to the same role he played in American pie. His character, Paul Meltzer is the nicest, dumbest guy in the world. He was the school football champion until he broke his leg in a skiing accident. Now he’s just the guy everyone loves. Mr. Popular. And McAllister convinces him to run against Tracy.

But there’s a problem at home for Paul. His sister, Tammy is a bit of a rebel and she has a lesbian fling going on with a girl who is not into her at all. That girl ends up dumping her and moving on to her brother, Paul. I’ll never understand why Paul doesn’t ask Tammy if it’s okay, even if he didn’t know about the lesbian affair, just the fact that the two girls were friends. Especially being the nice, sensitive guy that he is. It’s one of the few things about this movie that doesn’t quite make sense.

Well, Tammy gets mad about Paul seeing this girl, and she decides to run for president too. And that puts us smack into the heart of the story. One election with Jim McAllister overseeing everything and even pulling the strings, and three candidates. The scene where they make speeches is a lot of fun, and timed perfectly with Paul and the Tammy both offering up some very funny moments.

The movie goes on to follow the results of the election including a sabotage of posters around the school and a manipulation of whom the real winner is. At the same time as all of that is going on, McAllister starts an affair with his wife’s best friend that gets completely out of control and ends up falling apart in every way. Soon, the character is a mess, bee sting to the eye and all, and we watch as he continues to make bad choices. He’s a fun character to follow. Good guys are boring and bad guys are interesting. This movie certainly proves that. It’s a clever film that really knows what it’s doing and tells a smart story rooted in comedy and easily relatable situations.