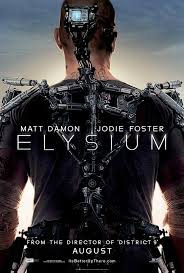 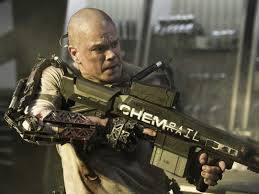 A pretty solid combination of sci-fi ideas and action, the movie unfortunately gets a little too political and starts become routine the longer it goes on.

This movie, like District 9, the director’s previous film, is very creative and cool. There are lots of wonderful ideas here about the future and how earth basically becomes two different worlds. There is the damaged and polluted earth and then the satelite station Elysium, orbiting above it, that basically runs everything. Matt Damon plays Max, the Snake Pliskin role of a guy trying to go from one of these worlds to the other and put the elitest group with all the power, in their place. The movie develops some very clever plot ideas and also features great action. at times it feels a little too political (talking about a coo and things like that), and it could have used a little more of this action, but otherwise, it was a very good film.

Elysium is a good movie that just needed to be a little stronger in order to be great. It has a pretty cool initial concept going on, which is that planet earth has come a mess to the point where the upper class people in the world consider themselves elite and above everyone else, and so they literally create a planet-like satellite-station that hovers above earth. This station, or other world, is called Elysium.

On Elysium, any disease can be cured in moments. Every house has a machine that repairs all medical problems with great immediacy. This even includes facial reconstruction. The problem for people down on earth, is that they have no access to any of it. That brings us to our main character, Max (Matt Damon), who works at a factory. Earth has heavy pollution and buildings in wreckage and this is the state of things when we meet Max.

Early in the film we see him beaten by robots that serve as policing forces. then Max has a hearing with another robot, over the incident. We get the idea that the future has become a place that is controlled by robots and the people of Elysium, and that they are somehow tied together. Are the people on Elysium also governing earth? It would make sense, since Elysium citizens have the right to come down to earth if they want to. One of these citizens, who makes regular visits down to earth, John Carlyle, (William Fichtner), runs the factory. he is the corporate businessman behind it all.

When Max runs into a problem with one of the machines that gets jammed, he refuses to go inside the machine and fix it. That’s when his boss (who works for Carlyle), comes over and tells max that if he doesn’t go into the machine, then he’s fired, and the boss will find someone to take the job who will go in. so max does it, and the whole thing malfunctions while he’s inside, locks him in, and results in him being exposed to extreme levels of radiation. He is now going to die in about five days.

That’s what gets max interested in making a trip to Elysium. He needs to get cured of the thing that’s going to kill him, fast. He has an old friend, Frey (Alice Braga) who works at a hospital and has a daughter who is also going to die. Alice wants max to take her daughter up with him. But before he can even think about that idea, he needs to find a way to get up there.

I like that this movie does not make it so simple for max to get up to Elysium. He can’t just highjack a space shuttle and fly up there. In fact, we get a scene of three space shuttles attempting to do exactly that. They leave earth and fly out towards Elysium, and security advisor Delacourte (Jodie Foster), on Elysium, takes over. She contacts her assassin Kruger, (Sharlto Copley), down on earth and he gets the coordinates of the shuttles and fires up missiles. Two of them hit their targets. One misses and the shuttle lands on Elysium. That’s when robot security comes out and attacks the passengers.

So max can’t just get up there so easily. Instead, he has to go through the black market underground. He gets a friend of his, Julio (Diego Luna), with connections, to take him to the big boss. That big boss has a mission for max to undertake that nobody else would dare try. If Max can pull it off, then he will get a ship to take him to Elysium. The mission is to get a chip inside the head of Carlyle, kill Carlyle, and bring the chip to the boss. This chip has all kinds of codes and important information on it. Max agrees.

First he has to undergo some reconstructive surgery that basically attaches a new robotic skeleton to the outside of his body. Suddenly Max looks like something out of a Terminator or Matrix movie. The skeleton doesn’t have any additional powers, other than that it keeps him standing up right, and makes him strong enough to take on the mission. It would have been cooler if it had something additional going on, like war machine in Iron Man 2.

The rest of the movie becomes about undertaking the two missions. The first one is the mission for the boss and the second one is the mission for Max, getting up to Elysium, and getting himself cured. All of that storyline is pretty good. So is the action. It uses slow motion only occasionally, and only for quick shots. Compare that to something like Abraham Lincoln: vampire hunter, which was constantly doing a stop-start changeup in its action scenes, between slow motion and regular motion. The effects in that movie were very fake looking and they felt it because of that technique. Here, in Elysium, the action mostly takes place at regular speeds, and the effects all seem more realistic. This movie of course uses computers, but it isn’t nearly as apparent or obvious. Everything looks real and great.

There’s a lot to like about Elysium, from the story to the action to the many cool ideas. But there are also small problems. First off, why is the security of Elysium using an assassin down on earth to fire missiles up into space? This really couldn’t be done from on Elysium? Another problem is that, while the action scenes and robots were all cool, we could have used more of them. There really were only a handful of action scenes, and there should have been more. Then there are the later portions of the movie, which end up feeling kind of political and routine. Everything is tied up way too nicely, as if they ran out of original, creative ideas and just gave up on trying. Nothing in these later scenes is really bad, but they also don’t have the same originality as the rest of the movie. Elysium is director Neil Blonkamp’s follow up to district 9, and in many ways it feels similar. Both movies are pretty good. While that movie had an underlying message about immigration, with this one it’s health care. It’s a bit too much of a political agenda, but otherwise, this is a pretty entertaining film.