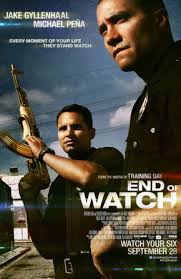 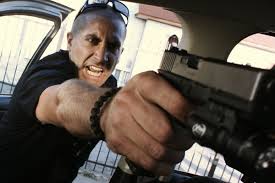 A gritty and intense movie that doesn’t forget to also have fun, this one is very entertaining and enjoyable.

This movie is the real deal. it’s a cop movie that actually does things right. this is the movie that makes you wonder why it always seems to be so hard for Hollywood to tell this kind of story the right away. It involves lots of different crimes that our heroes come across (close to ten), and some detailed exploration of what they’re dealing with and how they’re handling it. What really helps here is that every situation is completely different than the others, and that our heroes react to what they are coming across in unpredictable yet realistic ways. We don’t see them kill for no reason, or because they’re angry, for example. Yet we do see them make unwise and immature decisions at times. The movie builds in intensity as it goes on, and really delivers.

End Of Watch is a very cool movie. It is lively and energetic, but is also smart, and that is a key thing. This is an action movie that is about much more than the action. We get into the heads of these guys and understand why they do what they do. It is a movie about being young and wanting to make a difference, and doing a job that gives you the power to actually do something.

At the start of the movie, we are immediately thrown into a car chase with the voice over of Brian Taylor (Jake Gylenhal) telling us who he is and what he is all about. We do not see Taylor, or even his partner, but instead, stare out the windshield, at the car they are chasing for the whole scene. We watch as the cars make rapid sharp turns and even smash into each other. All the while, we get numbers on the screen telling us that we are watching through a camera, which is currently recording. When the police car stops, our two heroes get out and shoot down the bad guys who have pulled guns on them, and we see all this through the lens of the camera that is still in the car, filming out of the windshield. It is a hell of an opening sequence, and perfect for starting this movie.

End of watch was written and directed by David Ayer, the man who specializes in police movies. Ayer is best known for writing training day, but he also penned films like Street Kings and Dark Blue. as a director, he has so far been less than great. His directing debut was Street Kings, the Keanu Reeves junky film. He then went on to make Harsh Times, with Christian Bale, which was barely seen by anyone. End Of Watch is Ayer’s best film as a director. It is better than training day or anything else he has been involved with. This is his strongest achievement so far.

The movie is about the job, more than anything else is. For that reason we only get to meet the women on the lives of these characters briefly. Anna Kendrick plays Janet, Taylor’s girlfriend, and she has a few scenes, but not a whole lot of dialogue. During the course of the movie, we see Taylor going from a place where he is talking about being single to dating Janet, to marrying her. It all happens so fast, and that is done intentionally to show that for these characters, their home lives are not their priority. Their job and their partner make up their real lives. That is who they spend every day with. Their partners are their best friends.

We see Brian and Mike (Michael Pena), his partner, take close to ten cases during the course of this movie. One of the first ones involves a couple that has their children tied up with duct tape in the closet. Our boys go in, investigate, and find the kids. We learn right off the bat from this situation that you can’t believe what people are telling you and that this movie is not afraid to get harsh. As far as the believing part, the members of the couple were both saying different things about their kids, and neither one was the truth. The woman said her kids were missing and outside somewhere. The man said the kids were with their grandmother. Our police heroes are the ones who went in and found the kids in the closet.

The next case we see these guys tackle involves a man who is being disorderly. The two of them go into his house, and right away, the man starts disrespecting officer Mike. That is when Mike challenges the guy to a fistfight, with the guy saying that if he loses, he will put the handcuffs on himself. Mike accepts the challenge and the two of them go at it with brain standing by watching and cheering mike on. This shows us that these guys do not always follow protocol and that they might seem serious and respectable, but they are still young and naive. They take risks, live dangerously, and do not always make the best decisions.

Another situation that shows us that is a fire where the two of them go in and rescue some children. This is an amazing scene where they both have to go in multiple times as each time they learn that there are more kids still inside. The smart thing about this movie is that it not only shows us this scene but also the conversations afterwards. We watch as the men win awards for their bravery, get applause from their fellow officers, and discuss the conversations they had with their wives, about how they should not have done that.

As the movie heads into its second half, it gets even darker and grittier. First, we see a scene where the guys are out driving and here of an attack over the radio. They here a female officer calling for help and make it to the scene to find her partner stabbed in the eye and the officer herself, being beaten by a large man. They arrest the man, and their commanding officer asks why they did not shoot him after what they saw he did to the other cops on the scene.

We get two other situations that our cops stumble upon and both lead to them becoming targets of a powerful drug cartel. The first of these is a house where a bunch of people is being held prisoners in a back room. When Brian and Mike find this, they think they have uncovered an amazing case, and solved a huge mystery, but they find out from higher up authorities that they should not have gotten themselves involved. The next house they come to have dead bodies lying around, severed body parts, and a ton of drugs. Now the cartel is furious. We hear a phonecall of someone calling in a hit on these two city cops.

The final segments of the movie really do build up in intensity, the way a good climax should. We see the guys be lured into a trap and have to deal with the consequences. If I have one problem with the movie, it’s the scene where the guys go running into the courtyard of a building with bad guys standing above them aiming guns and firing, and how neither one of them gets shot (other than a tiny shot in the hand.) Still, everything else about the movie works, including a dramatic and powerful ending that pulls no punches. This movie is exciting and fantastic. It has so many cases and situations going on, but it also makes time for the real people and character explorations. I like, for example, that we get to spend time at brain’s wedding and actually watch conversations that go on there. This is a great movie.