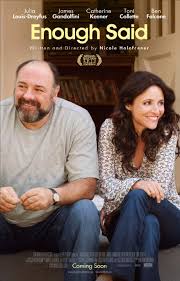 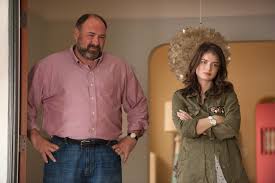 A very cute and charming romantic comedy about parents who are dealing with real issues, including the awkwardness of dating.

A very likeable movie, this one is both smart and fun with witty conversations and some great side plots. The problem is that the main storyline is one of those situations where there’s a relationship based on a lie. Of course it’s only a matter of time before the lie comes out and in the meantime we are just holding our breath and watching the close calls. Still, there’s enough to like about this movie to get passed that, even if it is the center that everything else is based around. The two stars are incredibly charming and they have nice chemistry together. I like the way their relationship evolves, and all of those side plots are surprisingly pretty clever.

Enough Said is an enjoyable movie. It’s cute and charming and loaded up with both interesting conversations and situations. that being said, the basic premise is very simple and also similar to other movies that have come before it. there’s always a secret and that secret always stays a secret until the exciting climax, when it finally comes out. here, the secret is that eva (julia louis dreyfus), is dating albert (james gandolfini), who happens to be the ex-husband of one of her friends / clients.

that friend / client is marianne, played by catherine keener. eva meets marianne the same night that she meets albert, while at a party. it’s never really explained what both albert and his ex-wife are doing at the same party, but i suppose we can assume that they have some mutual friends and just move on. eva doesn’t exactly hit it off with albert, but later on that week one of her friends tells her that there was a guy there who wanted her number, and eva knows exactly who it is.

she and albert go out. it’s a light-hearted first date filled with albert cracking jokes as the music of the restaurant is super loud and the place refuses to turn it down even after eva requests it. albert drives her home and we get the first kiss scene. only it doesn’t go smoothly or according to plan. eva actually stops him, when he goes in for it, and tells him that she’s not really sure. awkward. she should have probably gotten out of that car a while ago instead of waiting for it. but i suppose she really was taking as much time as she could to decide if she liked this guy, and by the time he went in for the kiss, she still wasn’t sure yet.

aside from the dating situation between eva and albert, we get into eva’s life quite a bit. she is a masseuse and we meet a number of her clients. the first is a guy who lives at the top of a huge set of stairs. he never helps eva carry her table up to his apartment. then there’s a woman who never shuts up while eva massages her. there’s also an older man who has really bad breath. and then there’s marianne, who tells eva stories about being married and about the things her ex-husband used to do to drive her nuts. for a while, eva doesn’t know that marianne is talking about the same guy she is dating.

aside from eva’s work life, and her dating life, we also get into her home life. eva has a daughter who is going off to college in just a few months. eva tries to relate to her daughter, only her daughter won’t have it, and think her mom should stop trying to understand the lives of young people. the daughter’s friend, however, is all over eva, and thinks this is the way mom’s should be. this friend comes over all the time, meets albert before eva’s own daughter does, and even asks eva for advice on whether or not she is ready to do it with her boyfriend.

speaking of albert, the dating between he and eva starts to go pretty well. their second date is just her coming over while he makes her brunch, and he is completely undressed. she says he’s wearing pajammas. he says he’s dressing casual. maybe a little too casual considering he accidentally gets exposed from his pants. and then when they’re sitting outside in the back, he gives her a first real kiss, and asks her beforehand if she wants it. i like these little touches. the awkward first kiss rejection in the car and now this second kiss where he needs to make sure she’s up for it first, before getting turned down again.

the main storyline here is of course about the dating between eva and albert. the two of them spend a lot of time together having fun conversations. i watched the sopranos for years, but never heard a single conversation about gandolfini’s deep breathing. here, in one movie, that sound is addressed. eva encourages marianne to talk about her ex-husband, especially once she learns who the guy marianne’s talking about really is. there’s even a close call, where eva has met albert’s daughter and now the daughter is over at marianne’s at the same time that eva is there, and eva has to run away and hide.

aside from this main storyline, there are plenty of other smaller ones, and they are all cute and enjoyable. there’s the story of the daughters. eva gets so close with her daughter’s best friend, that she tells the girl she could move into the house and take her daughter’s room after her own daughter has gone off to college. at one point, the daughter’s friend falls asleep on the couch with eva and her own daughter comes home and catches them. then in another scene, that girl’s mother comes over and confronts eva too. this whole dynamic is incredibly interesting, and it’s only a small subplot.

another one involves the couple eva is friends with (toni collette and ben falcone), and their maid who constantly puts things in the wrong drawers. eva contributes to this maid getting fired. and with all this going on, all of these many subplots, the movie still does a nice job telling the story about the relationship. there’s an incredibly awkward scene where eva and albert go to dinner at her friend’s house, and she makes fun of him and continually gives him a hard time about things, to the point where it is both uncomfortable and embarassing.

and then, of course, there’s the secret, that is just waiting to come out. this is the cliched part of the movie, and unfortunately it’s the foundation from which everything else in the storyline is based on. there are so many movies about relationships based on a secret and a lie. from bounce to that’s my boy. from she’s all that to you’ve got mail to family man. it’s always the same thing. with this movie, it’s the one reason why the movie could have been better, if it somehow went against the grain and wasn’t always headed in the direction of the secret coming out. still, with the great dynamic between our two starts, and the many creative subplots, this is a very enjoyable film.