Every Which Way But Lose ** 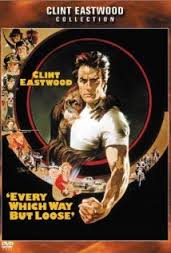 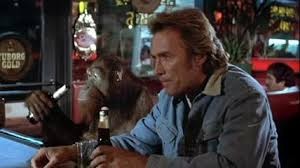 A somewhat slow, but overall decent movie about a bare knuckle fighter and his pursuit of romance.

Every Which Way But Lose is a pretty straightforward action-romance. On top of that, it’s also a comedy. Those three genres often don’t all get mixed up together, and that’s because it’s very hard to balance all three of them at once and still do a good job. This movie is an example of how that can be a problem. It suffers from trying to be too many things to too many people, which not doing an especially great job of any one of them. On a positive note, though, this strategy works in the way where if one these genre paths isn’t working, the movie has so much going on, that there are other storylines and ideas to fall back on. So, for example, when the comedy isn’t strong, there are other action scenes to fall back on to keep our attention.

The movie is about a character named Philo, (Clint Eastwood) who is living the country western life, hanging out at bars with his friend, Orville, or staying at home in a trailer park with his pet ape, Clyde. Phylo have a scene at the start of the movie, where he goes into a diner and is harassed by a guy who is out to give him a hard time. The two men go at it, and Phylo kicks the guys ass. But it’s not a typical fight. This one is shown from all sorts of unique angles, including point of view shots from what the man is seeing as Phylo’s fists come flying at him, and also point of view shots from Phylo’s angle, as the hands move out, in front of the camera, like some kind of first person video game where your gun is always in front of you. It’s a pretty unique approach to filming a fight.

Phylo and his buddy Orville go off to a bar where Phylo sits down next to an out of town girl, there to write a story about the country western life. The girl is a snob, treating Phylo poorly and criticizing the lifestyle. When she gets up from the table, Phylo finds a way to have some fun with her before she returns. That’s the comedy in the movie, little moments like this that make you smile, but certainly don’t make you laugh out loud.

We get another bear knuckle fight (which really just means using your fists, instead of gloves, like boxing), and this one is for money. A crowd builds around and Phylo wipe the floor with the guy. We get the same cool point of view shots as before, only by this point we’ve seen them all before. There will be two other fist fights during the course of the movie, making a total of four, not to mention all of the bar brawls and things like that. It’s a little much, and even though they are all fun, after a while you feel like you are just watching the same thing again.

The real storyline begins when Phylo meets a girl named Lynn Taylor. She’s a singer at the bar, and Phylo instantly fall in love with her. He asks about taking her home, and the girl has no hesitation. They go for the drive and make out in Phylo’s truck, and when he asks about coming in, she again does not hesitate and says she would love to. Only one problem…her boyfriend is in there sleeping. that throws Phylo off quite a bit, and he decides to try again with her another time.

The story with halsey-taylor continues long enough for Phylo to have one more conversation with her, where she says she wants to leave her boyfriend. She needs a man to take her away from him and to stand up to him. Phylo, of course, thinks that he can be this man. Only before he gets the chance to do something about it, she has left town. Phylo gets it into his head that the boyfriend must have gotten wind of what was going on between them and decided to take her away. And so he makes it his mission to go and find her. But he’s got some other complications to deal with along the way.

While he was with halsey-taylor, Phylo ran into a couple of confrontations with members of a bike gang known as the black widows. The first of these confrontations came when two of the members pulled up beside his car, saw Clive the ape in the seat, and made a few cracks about him and Phylo. Not one to let people just insult him, Phylo chased the bikers down and it turned into a pretty cool car chase sequence where the men ended up injured and without bikes.

The second confrontation involved two other members of the same bike gang attempting to buy halsey-taylor a drink at a restaurant. The only problem was, she was sitting at a table with Phylo and Orville. At that point Phylo decided to play along with the bike members, and drink the beer that was meant for the girl. This led to a fistfight out back, and to the bike members again going home without their bikes.

By the end of it all, the bike gang decides they need to get vengeance on this guy who is beating up their members and taking their bikes. So they start going looking for him. Meanwhile, Phylo get into a huge brawl at a bar with a bunch of men who turns out to be cops. He leaves the brawl unscathed, but now the cops want vengeance just like the bikers do. They want to find this guy who beat a whole bunch of them up.

And this ends up being the story of the movie. Phylo are out looking for the girl and he’s got both a bike gang and a bunch of cops out looking for him. There’s enough story here to keep your attention, even if none of it feels incredibly original. And then there are the random fights thrown in throughout the movie, just to add a little spice here and there. With all these other parties coming after him, Phylo still finds time to take on a local challenger in a meat packing factory and then to fight against the big champion of the area, tank Murdoch. But the interesting parts of the story or the ones involving the romance and how it ends up. That’s where the movie, for the first time, decides to get a little creative and not go down the same route as every other film. This is an interesting movie with a lot going on. It’s a film that starts off kind of slow, but certainly picks up in the second half, once more and more plot lines start to unfold.