Everything or Nothing: Bond ** 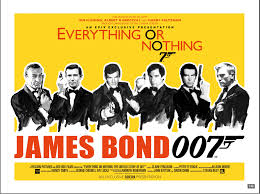 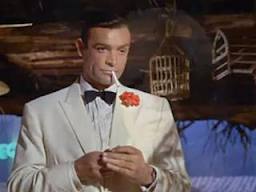 An interesting movie about the longest running film series and the behind the scenes stories of what kept it all going.

James Bond is the longest running superhero movie. He’s not a superhero, but a spy of course, but in today’s day and age, this guy has saved the world more times than anyone else including Superman or Batman, and this documentary chronicles how it all happened. The movie takes us through the history of Bond and not only how the films got their start, but also how they kept going strong. There are a lot of stories here of what went on behind the scenes, and most of them are fascinating. From Pierce Brosnan being cast before his time and having to drop out to the story of two rival Bond films competing and Sean Connerey selling out the original producers, this is definitely an entertaining film.

The James Bond movie series is absolutely the longest running film series of all time. It started back in the sixties and is still going strong today. That is unbelievable when you think about it. How can something like this just never drop in popularity? The answer is simple. It lies in the people behind the franchise who keep remaking it and retooling it to fit a new audience. It is just like the batman world in that sense. When things start to go sour (Pierce Brosnan’s last movie, or Batman and Robin), they put a stop on the series for a while, strip it of its parts and then build it back up again to look completely different and new for a new generation.

Everything or nothing is the movie about all of this, although it is not as much about why the series has been successful over such a long period, as it should be. Instead, it is about the entire behind the scene stories that went on. Considering that the series spans more than forty years, there are definitely quite a few of those. To start with, there is the story of how Ian flaming wrote the books, but two other guys got the rights to them. One guy bought the rights to the books. The other guy decided he had a way to make them into movies. This second man was Cubby Broccoli, whose family name has been synonymous with the bond series since the beginning, and still is today.

The interesting parts of the movie are about how the hands of the series changed over time, with regards to who had control and who had the rights to make the films. It all started with these two guys taking the control from Ian Fleming and making movies out of his books. They cast Sean Connery as the lead, not because he was incredibly buff or looked like he was invincible, but because he was charming and likeable. The first movie was dr. no. It did well, but not amazing. They decided to try some more.

The second bond movie was From Russia With Love. Again, it did well, but it was the third bond movie that really broke through and got the public’s attention. That movie was gold finger, the first bond movie I ever saw. This one was always the most popular. Considering that, it would have been nice if the movie spent more time focusing on Goldfinger and what made it such a big success compared to the previous films. Why did this one suddenly take off? We don’t get that answer, and we also don’t get interviews with former bond girls about what the public’s reaction to the films were or anything else. That would have been another nice touch that is missing here.

Instead, we get them briefly going over the order of the films and how the public received them. After Goldfinger was Thunderball. This little film caused all of the controversy. Thunderball was an underwater adventure involving sharks and scuba diving. The movie gave us Number Two and the secret layer with the man stroking the white cat and the chairs that sucked people down to their deaths. The documentary does not go over any of that, but what it does do is tell us the story behind the people who wrote it.

There was a man named Kevin McClory who had a hand in writing Thunderball. He was not really a hired a screenwriter, but more of a friend to the guys who were working on the movie. Mcclory offered up his ideas, and secretly copyrighted them so that when broccoli and his team used the ideas, mcglory was able to successfully build a case that claimed the bond guys were stealing from him. This got so out of control, that Broccoli and his team decided to just share credit on the film with mcclory, and to even put his name in the opening credits, ahead of threes.

Then thing got even worse. This guy McClory just would not go away, and since he had already won his case on Thunderball, he kept pushing, fighting for the rights to make his own bond movies, separate from Broccoli’s. Clearly, this guy must have had some kind of pull with the industry or had some amazing lawyers who found some wild loopholes, because McClory was winning every contest he entered. When Sean Connery had a falling out with the bond guys and wanted to get back at them, he decided to make a bond movie with mcclory. This became the film never say never again.

Meanwhile, there were other things going on with broccoli and company. For one, before Connery got back in the game, his first replacement in the bond role was George Lazneby. This guy fought hard to get the job, but once his filming was over, he did everything he could to get away from Bond and being type casted in the role. He started growing his hair long like a hippie and distancing himself from the franchise to the point where he was not asked back for a second film. In this documentary, Lazenby explains it all and why he did it. He explains how it was the hippie movement and being a straight arrow government man was the last kind of character anybody wanted to be associated with.

There are other great stories in this movie too. As it gets into some of the more modern bonds, we get the tale of Pierce Brosnan, who was hired long before he actually took the role. Brosnan was committed to the television show Remington Steel. When it looked like the show would not be picked up again, he auditioned for bond. He got the offer to play the icon, and it was the happiest moment in his life. Then he found out that Remington stele was being renewed after all, and he was under contract to return. His dream of being bond was over. Until over ten years later when it resurfaced again.

The final story is about Daniel Craig, our most recent bond, and that’s fitting considering is the guy currently starring in the movies. Craig’s story is about how he was the first blonde actor to play the character and how there was a tremendous amount of backlash because of that, when he was first cast. That initial backlash did not amount to much, however, because that first Craig movie, casino royal, turned out to be incredible. I would have liked to hear more about how they made that first Craig movie so great, by changing so much about the series, and remaking bond for a new generation. This was the Jason Bourne inspired generation, the same one that got us Christopher Nolan making Batman movies, but the documentary doesn’t talk about any of that. While there are certain pieces missing, the documentary, everything or nothing, is still very interesting. There are more stories than I would have imagined and most of them are good.