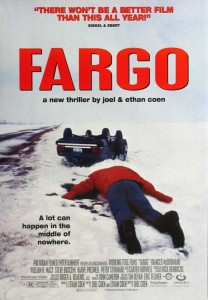 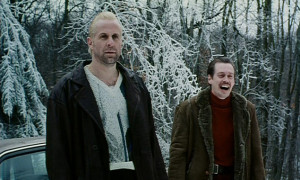 Fargo is a very dark black comedy disguised as a mystery / noir. It isn’t very mysterious, because we know who the villains are and what they have done. We even know why, and who put them up to it. However, what we don’t know is how this whole thing is going to work out and come together. It’s the story of a burned out family man, broke and unhappy, who hires two men to kidnap his wife for ransom. The angle is that he won’t be the one paying the ransom. He’ll be the one benefitting from it.

The movie is smart enough to start right off with the scene where this man, Jerry (William H. Macy in the role that made him a star), hires the two guys to do the job (Steve Buscemi and Peter Stormare). It’s at a noisy bar, and yet the dialogue comes across as perfectly timed and crisp. There’s a mix up about the time they were supposed to meet at this place and that mix up keeps working its way back into the conversation. And this is why it’s a black comedy. Because of characters like Buscemi’s who don’t know how to let things go and instead, look at the world in their own way. It has a dark and disturbing storyline to be sure, but the characters are all quite strange, unique,  and funny in terms of their bluntness. .

After the initial planning at the bar, the two parties go their separate ways. Jerry goes home to his wife and kid. The wife’s father is there at the house as well, and he’s really the whole reason Jerry has hired these guys. The father,  Wade, is wealthy as hell, but he’s also a bit of a jerk and he doesn’t much like Jerry. Therefore, Jerry’s plan is to have his wife kidnapped and to have her father pay the ransom. Then he will split the ransom with the kidnappers, 50 / 50. It’s an interesting premise. Simple, yet different.

Well, things start to go wrong. First of all, Jerry is working on a side project where he wants Wade and his accountant friend to give him money to invest in a lot. And Wade looks at it, like the idea, and is all set to go. But then he realizes what Jerry was asking. He thought Jerry was bringing it to them, looking for a finder’s fee, and he’s certainly not about to just give Jerry the money to do it himself. Poor Jerry was about to try to reach the kidnappers (if he even could) and call off the whole thing. But now, he’s back in the hole.

The kidnappers show up, take Jerry’s wife and then hit the road in their car that Jerry gave them off of his dealership lot. When they run into trouble on the road, they kill all parties involved. A police officer and two witnesses. And that brings on the investigation. It’s now nearly half way into the picture (Which is only a little over 90 minutes to begin with), and another main character comes on board. It’s Marge Gunderson, the pregnant police detective, played by Francis McDermond. She won an Oscar for the role, and like Macy, this is the performance that made her a household name. She has so much fun with the accent, mannerisms, and toughness of the Marge that she really brings this woman to life as a memorable movie character.

Marge starts right away with putting things together, looking at what the shot police officer wrote down before he was killed and pinpointing what kind of car it was that the killers were driving. And then she starts following their footsteps, hitting the road and going to Brainerd, where they slept with two escort women. Marge interviews these women in one of those scenes that shows just how funny these people from Minnesota sound, and then she continues on.

Meanwhile, Jerry is dealing with both wade and the kidnappers. With Wade, the old man wants to go to the police, but Jerry and Stan (Wade’s accountant and apparently best friend), insist they shouldn’t do that. Really it’s Stan who makes these decisions with Jerry and Wade on polar opposites. They both argue their points and then Stan makes the final judgment about whom he agrees with. The same happens later on when wade wants to be the one to go and make the money drop. Again Jerry and wade are on opposite sides of the idea and again Stan makes the final decision. Funny, because with Jerry being the girl’s husband, and wade being the girl’s father, Stan is the one who really has nothing to do with her.

The movie builds up in tension and suspense as Marge goes to visit both Chet, the mechanic who put Jerry in touch with these kidnappers, and also Jerry. Chet keeps it cool, but Jerry is a mess. And Marge feels herself getting closer. She also takes time out, while in Brainerd for her investigation, to meet an old friend who lives there, a Chinese man who claims his wife Linda recently passed away. The man is strange in the way he sits down beside Marge and puts his arm around her, knowing that she’s married and pregnant. And then he breaks down crying. Marge later finds out he was never married to Linda at all and that she’s still alive and well.

Moments like this have nothing to do with the story and they’re great because of it. So many movies stay focused only on the story, the mystery and clues and approach to solving it. But the best movies, such as pulp fiction, show you the characters in their regular lives as well. Fargo does this in a big way. Not only does it show Marge, both at this restaurant and then in many scenes with her husband norm, talking about his stamps, but it also shows Jerry at work. There’s an early scene where he screws a guy over on a deal for a car that he promised the man, and it shows off what kind of lying businessman he really is.

Fargo is a simple little story with a lot going on. What makes it great is that the characters are all truly rich and unique and also that the story is unlike anything we’ve ever seen before. Take A Simple Plan, for example, which came out a few years later (and ironically was made by Sam Raimi who used to be best friends and partners with the Coen Brothers). That movies plot was about three men finding a plane of money, starting to turn on each other, and ending up dealing with people who came looking for it. It was a simple rehashing of The Treasure Of The Sierra Madre. Well, Fargo keeps it simple too, and yet it’s not really like anything else. Credit that to all of the characters involved. The Wades and the two man kidnapping team. And also to the way the Coen Brothers spend time with each of these characters. You could almost say that there’s no main character in Fargo because the movie follows all of them away from the others, as if they were the main character. We see Jerry on his own, Marge on her own, and the kidnappers on their own. It’s a fantastic strategy, because the Coen Brothers are constantly able to move around and offer us up something new. When we’re tired of seeing Jerry in another mess, and we’re tired of watching Marge investigate, we move over to the kidnappers for some comic relief. This movie has it all.