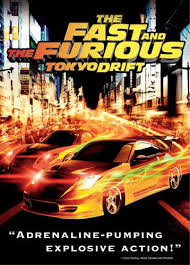 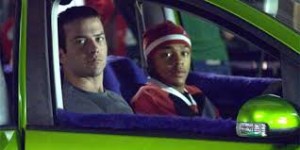 Not a very good film, this one starts out with a bit of promise, but quickly washes that away when our protagonist moves to Tokyo and gets involved with the wrong group right away.

This movie has a pretty lousy storyline, that opens with a sequence back in high school in America, and then seems to mirror that exact storyline for the rest of the film. In the opening scene, Sean races the most popular kid in school with the winner getting the guy’s girlfriend. That’s pretty much the exact same thing that happens once Sean gets to Japan. He finds a girl he likes who happens to be the girlfriend of the most popular kid. That kid works for an uncle who is in the mob, and Sean ends up challenging him to a race. In between, there are side plots and characters, like Han, a guy who befriends Sean even thought he is partners with the head villain. The one thing you would expect from a movie like this, with Tokyo Drift as it’s title, is that it would explain exactly how drifting works. Only this movie never does. Instead, it falls right into every cliche it can find, even if it already used that exact idea earlier on in the film

The Fast and Furious Tokyo Drift is not a very good movie. In fact very little of it feels fresh or original in any way. For the longest time, I put off seeing this film as the only one of the series that I had no interest in. That’s because this is the movie that really seemed forced. This is the film that did not feature any of the original cast, and seemed like it might as well have been a direct to DVD kind of thing, sharing the same title as the other movies in the series, but not much else.

With the first movie, the stars were Vin Diesel and Paul Walker. For the second film, Diesel had no interest in returning and so it was Walker who was the star. Then, for this, the third movie in the series, neither Diesel nor Walker wanted to come back. And so they came up with this film, which featured unknown actors, like Lucas Black, instead. But then something happened. For the fourth movie, everyone from the original came back. Not just Diesel and Walker, but even the girls, Michele Rodrigue and Jordana Brewster. And then the fifth movie (the one in Brazil) turned out to actually be good. It was the best of the series, save for maybe the first film. Suddenly actors like the Rock and Jason Statham for joining up with the series, and it became more and more of a success story.

These are some of the reasons why I decided to go back and finally watch Tokyo Drift. After all, one of the characters from the movie, Han, did carry over to later films in the series. And I was always interested in what drifting was all about. Sure, I could tell from the trailers that it was a certain sliding of the car, around sharp curves and dangerous locations, but how exactly was it done. The movie does not answer that question. It shows plenty of examples of drifting, from garage ramps to mountain sides, only it doesn’t explain the logistics of it. For example, do you hit the break and then slide? Considering that the movie is about a character who has no idea how to do it, just learning, you would think a question like that might have been answered.

The film stars Lucas Black, doing on of the worst mid-western accents imaginable. He is so bad in this film, in fact, that the series chose to bring Han back to continue on in the series, instead of him. Now, with the way things have turned out over the years, it seems like Black will be returning to future movies in the series after all. That’s because of Paul Walker (the actor) passing away, leaving the series in need of another young white American guy, and also because Han (the character) has been killed, leaving the series needing an actor who connects to this film. These rules are kind of cool, or at least they have been so far, but if it means bringing Lucas Black back into the fold and having to listen to that accent again, it might have been better off to just forget Tokyo Drift ever existed.

Black plays a guy named Sean, who is in high school in the U.S. at the start of the film. He acts like it’s his first day in school, but we learn later on that he’s been there for a while. He knows these kids, and when he gets into it with a bully, it’s over the bully’s girlfriend, who Sean is talking to. That kid throws a baseball through the window of Sean’s car, causing Sean to get out and challenge him to a race. Not a fight, a race. This is the first sign that the movie is pretty weak. Granted the race is cool as it takes the guys in and around a construction site, and it ends with both of them destroying their cars, but even still, the simple bully in the varsity sports team jacket idea is very unoriginal.

From here Sean is sent off to live with his father in Japan. We learn that this is not the first time something like this has happened and that every time it does, Sean and his mother pack up and move to another state. Not this time. This time it’s a whole other country, and you might think that would make a difference to Sean. Only it doesn’t. He gets into the exact same kind of trouble over there. But first, he has to go and see his father again. When he gets to his father’s tiny apartment, the man is not even expecting him. And then after speaking to him for no more than five minutes, his father tells him, “lights out,” as if Sean is a little child. This is silly stuff.

At school, the next morning, Sean is confused by a teacher who speaks only Japanese. He finally figures out that the teacher wants him to wear slippers in the classroom and not sneakers, but not before he catches the eye of a pretty girl in the class. This girl, Neela, is not Japanese, but a sort of mix of different cultures. After meeting her, Sean goes to the cafeteria and meets  a kid named Twinkie (played by Lil Bow Wow), who is an army brat and sells things out of his backpack. Twinkie and Sean quickly become friends.

Twinkie shows Sean his car, which is dressed and designed to look like the Incredible Hulk. The car is on a rotating wheel of cars that circle around a tiny garage door opening, and it’s a pretty cool idea that seems like something futuristic. Twinkie takes Sean to a garage where the kids in school race there cars and that’s where Sean runs into Neela again. He starts talking to her, and wouldn’t you know it, she’s the girlfriend of the head villain. This is a guy named D.K. (which stands for Drift King), and he tells Sean to stay away from his girl. When Sean doesn’t agree, they challenge each other to a race. Only Sean doesn’t have a car. Luckily, there’s a guy there who volunteers to let Sean take his. This is Han. Sean races Han’s car, only has no idea how to drift, and so he loses badly. He also destroys Han’s car. Now Sean owes Han, and he goes to work for him, helping Han collect on money that he is owed.

For a while, the only storyline of the movie is Sean talking to Neela and than D.K. showing up and beating Sean up. None of this seems to be going anywhere and it really feels like the exact same story that kick-started the movie, only back in the states. Then we find out that D.K. is involved with an uncle of his who is in the mafia. D.K. works for this uncle, and Han is his partner. All of this is revealed in such a strange way. It isn’t presented as a twist or a surprise, but more like something we were supposed to already know. To top it off, Han is stealing from D.K. Like everything else in the movie, this leads to a kind of race. It’s more of a chase scene with D.K. holding a gun out his car window and hiring at Han the whole way. And why is Sean involved in this car chase, riding around in another car?

Sean ends up going to the Uncle’s place and challenging D.K. to a race. The rules are that the loser has to skip town. This whole thing is not only ridiculous, but also very much the same as the beginning. It really seems like the prize is the girl, considering that she is the one thing that both guys are in competition for. The race around the mountain is cool, but it’s also more of the same thing we’ve been seeing the entire movie. The drifting makes for some neat scenes, but overall this plot is so weak and nothing can save it. It seems like the first ten minutes of the film were a short movie, and then the rest of this film just mirrored that entire plot. Some of the drifting sequences are good, but other than that this movie really doesn’t have much to offer.