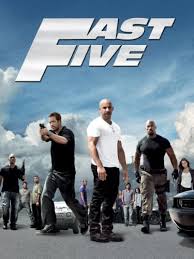 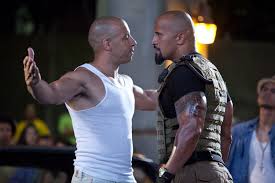 The best film of the series since the original, this one is loaded up with action and cool ideas.

Fast Five is fun. It’s the kind of movie that this series was always supposed to be about, which is probably why it’s the closest film to the original that we’ve seen since. The characters might still be saying dopey lines that are meant to sound cool, but at least there is actually a plot this time. and there are twists that are unexpected. i don’t think any movie in this franchise ever had that going for it before.

people say that with this new movie, the series became more about a heist than about street racing. they say it’s the new ocean’s eleven. i’m glad. the movie was always about gang violence, ever since the first film, but the street racing stuff had gone cold. one race is more than enough per film. and this movie, while it might be mostly focussed on a heist, does make the time to have one street race, with all the main characters in it. that’s really all you need.

The idea behind making the film was that they were bringing everyone back. they kind of started that in the last one, fast and furious, bringing back vin diesel, paul walker, jordanna brewster, and michelle rodriguez. that was pretty big for the franchise, which had totally lost it’s direction with tokyo drift (the only one of the series that i didn’t see.) tokyo drift is the only film of the series that really features none of the main characters (apparently vin diesel has a one-second cameo at the end).

So the last movie brought all the primary players back together and that was kind of cool. we all know vin diesel should have never left the series to begin with, as we went on to make crap films after that. but it’s nice that he came back to his roots, the film that made him big, and by doing so breathed a new life into the whole franchise.

Well, if the last movie was about bringing back all of the primaries, this new one is about bringing back people from every film. really connecting the world of these movies. so tyrese from the second film is in it and so is a japanese guy from tokyo drift. ludacris is in it too (he was always hanging around in these movies, never a major character, but there in the background.)

And then there’s the rock. getting him to be in this movie was an absolute stroke of genius. that’s because the rock is a big hardcore b movie action kind of guy. and the fans of this movie are also fans of him. so combining the two of them just gave fans double the reason to go see this movie. and to take it further, the rock is a big bad action movie star for the new generation. and the movie has him and diesel duking it out with each other in an extended fight scene. in an interview, diesel said we never got to see macho eighties icons schwartznegger and stallone fight it out. he’s right. and with this movie, he makes sure audiences get the next best thing.

the plot has the characters in rio, brazil. they have dropped off the grid there, especially after busting dom (diesel) out of prison at the start of this film, (the last film ended with him being sentenced). the three of them meet up with an old buddy of theirs, a character from the first film. and i like that there are mentions to characters and things that happened in the first film. they mention letty (michelle rodriguz) and how dom didn’t believe that that paul walker’s character, brian o’connor, was a cop.

After a job they were doing goes bust and it appears that they were setup by the biggest drug lord in brazil, they decide to set their targets on him. and so they do. that’s when they bring in all of these characters from out of town… the characters from each of the other movies. and now that they have their team together, it’s time to get to work.

People compare this movie to ocean’s eleven, but i think it is much closer to the italian job. that’s because that movie, like this one, was more about action and even involved a car chase in the streets. all three movies are heist films to be sure, but the italian job, like this movie, had that b movie, not taking itself too seriously kind of feel. ocean’s eleven was a little too high class and elite to be in a category with these films. like both of those movies, however, this one has each character do a different job or have a different specialty to help out with the overall heist.

the rock was great in this movie, and the way his character ends up in a very different place from where he started is pretty cool. so is the end car chase and in particular the way the characters find a cunning method for getting what they want. but for me, a major reason why this film is so much better than the last one is the effects. in the last movie, the effects were clearly all computerized and it often felt like i was just watching drawings. the cave at the end of that movie felt completely phony. but here, in fast five, i didn’t see any of that. the effects look real, and i’m thinking they probably were. that combined with a cool heist premise instead of doing the same old thing, was some really good planning. there’s a fantastic surprise cameo at the end that shows how this movie is going to continue the pattern of bringing everyone back and connecting the world of these films together. i am very impressed that they are doing that. it’s like they’re taking a note from marvel, with all of their cross overs in movies and final scenes after the credits that connect the hero to the other characters in the marvel-verse. i love that they found a way to do something just like that for the fast and the furious franchise. and now, apparently, there’s going to be a six. i’m happy about that. wonder what they’ll call it. maybe something like fast, furious, and ferocious six.