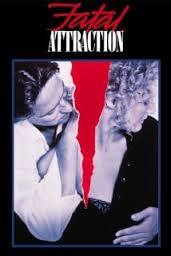 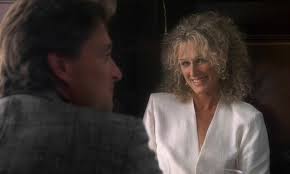 A scary and haunting movie about an affair that turns into a stalker relationship with a psychopath woman who just won’t go away.

The first real movie of it’s kind, this eighties adult stalker film takes the concept of a family man being torturred by a woman he had an affair with to some pretty extreme levels. The movie takes it’s time getting into the affair, developing the characters and setting the whole thing up. then once the affair begins, it’s a weekend long fling with deadly consequences. Michael Douglas stars as Dan, in the kind of seedy role he used to play so well (Basic Instinct, Disclosure.) This time he gets in way over his head and ends up trying to survive the aggression of a psychopath. that woman who he had the affair with and now just won’t go away, is Alex, played by Glen Close, in a classic villainous role. The movie is very well made, including close ups that play with the audience’s emotions and some truly riveting scenes. This movie might be from the eighties, but it is still just as intense as it ever was, when viewed today.

Fatal Attraction is a classic thriller, and it’s not hard to see why. It was one of the first movies that really captured fear and paranoia and was able to do it in a very violent way. This is the sort of movie that Hitchcock might have made if he was alive today. Now that’s not saying that it’s any great mystery, or anything like that, but the suspense is very real and the images are extremely disturbing. Especially combined with the wonderful filming by director Adrian Lyne. This guy uses close ups to perfection, and that’s another thing he’s got in common with hitchock… knowing how to best film a scene in order to get the desired audience reaction.

The story here is the kind that we see all the time now, about an affair turned wrong, and a woman who ends up coming after the man and his family. Most attempts to copy this movie end up being pretty bad, whether it is the psycho mother who is trying to get in the middle of the relationship (Hush, with Jessica Lange), or just another woman who the man has an affair with (Obsessed, with Beyonce and Idris Elba). Fatal Attraction gets major points for being the first movie of it’s kind. Even lyne, as a director, hasn’t come anywhere near to topping this movie, since. His closest attempt was the Richard Gere movie, Unfaithful, but that movie ended up just reminding us of fatal attraction with its affair gone terribly wrong. It’s only when Lyne tries to do things vastly different than this film, such as Jacob’s Ladder, that he has been able to find some success.

Fatal Attraction features Michael Douglas in one of those seedy, naughty guy roles that he used to do so well. Between this movie, basic instinct, and disclosure, Douglas really had it down, playing the guy with limited values and morals and one hell of a sex drive. Here, he’s playing a married man named Dan, who has an affair with Alex (Glen Close), when his wife is out of town. He basically is playing the same role he did in disclosure (also a married man), only in that movie he didn’t go through with the affair, and in this movie he does. In both films, he spends the rest of the movie dealing with the repercussions.

Dan’s biggest mistake (other than having the affair all together), is that he doesn’t just make it about one night. He makes it about a weekend. His wife goes away for a number of days, and during that time, Dan spends a lot of time with Alex. She comes over to his place and he goes over to hers and they basically spend the entire weekend together. He is an absolute idiot to think that she will be okay with never seeing him again, once the weekend is over.

Still, that’s what he expects. He did tell her that he was married; from long before they started anything up, but what he didn’t make clear to her was that this was going to be a one-time thing. I like the way the movie doesn’t just jump right into the affair, but first shows Dan in his family life and then shows him at a party, seeing and talking with Alex for the first time. Dan’s wife, Beth (played by Anne Archer), is there at the party with him, but she steps away for a moment and Dan goes to the bar, and that’s when he and Alex are able to get a brief conversation in. this movie takes its time getting to the affair, and hinting at it, and setting up the characters.

After that, Alex shows up in a meeting that Dan is in. she’s working with his company and that creates a situation where they end up seeing each other again. If there was a connection between the two of them at the party, it’s when they go to a restaurant together, in order to get out of the rain, that the sparks really start flying. They both admit to having feelings for each other and talk about getting out of there. That’s when they leave the restaurant, go to his place, and begin the affair.

It is as the weekend winds down that Dan starts to notice Alex is a little crazy. Maybe even more than a little. There’s one day where he has some work to do and she won’t leave him alone, constantly asking him to come over and telling him she will leave him alone to do his work once he is there. Then, when he tries to say goodbye to her for good one day, she flips out and slits her wrists. The scene is so surreal that you think it’s a dream at first, until it lasts long enough that you realize, this moment is actually happening.

Once Dan’s wife has come back to town, Alex starts her stalking. She calls the house all the time, and hangs up when Beth answers. She also calls him at work a lot and gives Dan’s secretary a hard time when the secretary tells her that Dan is not around. Alex shows up at work once and Dan tries to let her know that they won’t be seeing each other again. When Alex doesn’t stop calling the house, Dan has to get his number changed. And that’s when Alex shows up at the house, sitting down with Beth, and pretending to be a potential buyer, interested in the house.

There are some really great moments in this movie. One is when Alex is there, talking to Beth in the house, and Beth gives Alex their phone number. You can just see the look on Dan’s face, knowing that he went through all of that trouble to have the number changed for nothing. This is the one and only person who he doesn’t want having the number. Another classic moment is the bunny rabbit scene, which is one of the most famous scenes in the movie. That one and the bathtub scene that comes later on.

Things definitely escalate as the movie goes on to include property destruction, kidnapping, and even attempted murder. This movie is constantly in your face and edge of your seat exciting. Glen close plays a hell of a villain, and you believe her because of her vulnerability. It’s because she is so weak and so disturbed that we just don’t know what she is capable of. Aside from Douglas and close, Anne Archer is also terrific here; playing the voice of reason behind everything else that is going on. I love the moment where she picks up the phone to tell Alex off. This is a very intense movie.