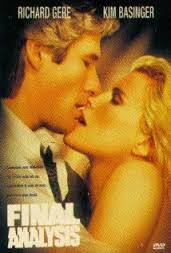 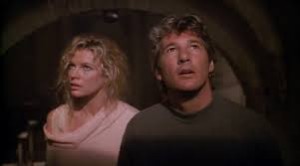 Wants to be Vertigo meets Basic Instinct, but ends up more like just another campy and over the top version of those films.

Final Analysis is a movie that wants desperately to be an Alfred Hitchcock film. This movie gives some of Brian De Palma’s work (like Dressed To Kill), a run for their money with how much it is trying to copy the master of suspense. And just like Dressed to Kill, or Gus Vant Sant’s attempted remake of Psycho, it doesn’t work. The movie feels like we’ve seen it before and seen it done better. Sure, there are some redeemable qualities, but as soon as we get wind of what’s going on, the story becomes as predictable as a paint-by-numbers picture.

The movie starts with a psychiatrist seeing a patient. Dr. Isaac Barr (Richard Gere) sits in a chair listening to Diana (Uma Thurman) tell stories of a dream she’s been having. It involves various types of flowers that are all different colors. The dream is not explained or made to seem like anything more than filler. Now, the dream will indeed come into play later on in the movie, but since we don’t know that at the time, it feels like a waste, and like a lousy way to open the movie up.

Diana is dealing with abuse issues and she suggests that Isaac meet her sister, who can shed some light on Diana’s past. Isaac agrees. Then he goes off and testifies in a trial about a client being insane when he committed murder. This scene serves two purposes. It shows us that Isaac loans himself out to attorneys and testifies about the mental state of clients, but it also introduces us to the man on trial who (like the dream) will work himself into the picture later on.

There’s a lot of setup going on here, which is normally a good thing so long as the audience is also being entertained. Here, we are not. Isaac does meet Diana’s sister, Heather (Kim Bassinger), and despite Heather being married, she and Isaac sleep together. They take a trip to a lighthouse under the Golden Gate Bridge. That bridge is shown quite a bit in this movie, to the point where even if we weren’t thinking of the Hitchcock movie, Vertigo, for it’s plot similarities, the bridge reminds us that we should be.

Isaac starts having his friend investigate Heather’s husband (Eric Roberts). Heather has told Isaac that her husband is a gangster and Isaac laughs at how ridiculous that sounds. But he is concerned and his friend finds out for him that Heather is married to a very bad guy. By now we are nearing the halfway point of the film, and there hasn’t been a single moment worthy of our attention. It seems that the Roberts character, jimmy Evans, will find out about the affair and come after Isaac. Luckily the movie has other plans.

After a very slow and uneventful first half of the movie, a main character is suddenly killed, and from there the movie takes a whole new direction. The storyline is no longer about the two men going at it over Heather, but about the murder and who did it and who is going down for it. While the change in tone and direction is certainly appreciated and makes the movie a hell of a lot more interesting, it’s still the sort of thing we’ve seen before.

We know, for example, that Isaac is going to be framed for the murder. We know not to trust the characters that were also involved. And somewhere around the half way point the movie appears to give up on its plans of being like Hitchcock and instead go for Basic Instinct. Only that film, also, did things so much better. That movie had a whole eerie world going for it, with an author who wrote about murders and then watched as a killer copied them. Like this movie, the main character became a suspect, but Basic Instinct had so many other characters and story lines. Final Analysis, on the other hand, has one fairly-simple, direct path.

The movie makes nice use of setting and scenery. It gives us a San Francisco trolley that ends up factoring into the plot for one cool scene where two trolleys pass by each other. It also uses the lighthouse, not only early on in the film, but also for the climax. And when that happens, there’s a massive thunderstorm going on right outside, with the characters caught up in the ferocity of the weather. It all feels pretty clichéd, but you have to give the movie credit for making the effort. At least it keeps our attention.

Once we figure out who the bad guy is, everything about the movie becomes straightforward. And that’s not what you want from a mystery / thriller. There are plenty of plot holes and inconsistencies, such as that flower dream and how it conveniently comes into play later on. This really does feel like a B movie, or something that was just made to be a campy version of other, better films.

Final Analysis might be a pretty silly movie in the grand scheme of things, especially when compared to other movies that did it better, but it doesn’t seem to mind that. It has fun being over the top and has some interesting momentum that keeps it moving forward. The music is so in your face that it sounds like an opera. Of course, this is what Hitchcock used to do too. The twists are sometimes predictable, and sometimes just kind of dumb (switching clothes, seriously?), but there’s enough going on here to keep you interested. Having Keith David as a tough guy cop is a plus. And Bassinger really is pretty scary in the role. She’s the liveliest performer on screen here. Gere, on the other hand, shows little emotion and does nothing for the film. But he does have one great moment, where he sees the killer walking toward a cop with the murder weapon containing his fingerprints on it. How Isaac handles this and finds a way to explain his fingerprints is one of the best moments in the movie. It’s not a good film, and there are plenty of other movies that have done it better, but this one is still somewhat entertaining.