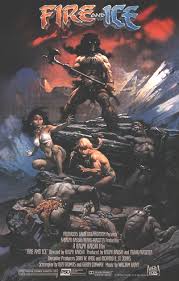 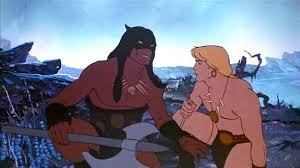 A very cool, violent animated film with a real lord of the rings-like adventure feel to it, and lots of excitement among the cool visuals.

The best Ralph Bakshi movie out there, this one is all violent fantasy world stuff with loads of action around every corner. The story is pretty thin, about two kingdoms at war and a princess from one of them, who is kidnapped by creatures from the enemy kingdom. Everything after that becomes about trying to get her back. This movie isn’t about story. It’s about great action and cool looking characters. The setting of nearly every scene is terrific, with fights taking place in some fantasticly drawn out locations. Everything looks great in this film. even the character of Dark Wolf (pictured above), looks terrific, with his mask and giant battle axe. Only we never learn very much about him. maybe that’s a good thing, keeping him surrounded by mystery, but this movie was definitely lacking in it’s story. in all other ways, however, it definitely worked.

Fire And Ice is a pretty great animated-movie. It’s by Ralph Bakshi, the guy who was a sensation in this field back in the seventies, making animated films for adults. Those movies might have combined fantasy and animation nicely, but they never had enough action for me. I’m talking about movie like Wizards, or The Lord of Rings. The live action, Peter Jackson rings movies were much more exciting. Considering that it is infinitely easier to do stunts with animation than to actually do them with real actors, bash’s movie should have been the one that had more action. Still, what those earlier movies of his leave to be desired, Fire And Ice makes up for.

It is a very cool, very exciting film. The movie starts with two kingdoms and the evil queen who is in charge of her ice kingdom. She has a son, named Nekron, who also sits on the throne, and oversees the beasts of the kingdom. Meanwhile, in another part of the land, there is the kingdom of humans. They live in a mountain, where fire spews out of the caves. Basically. This is the story of two kingdoms at war with each other. I’m not sure that it was necessary to make one kingdom of fire and the other of ice, except that it gave this movie a cool title.

The ice kingdom starts attacking on the battlefield with monsters and beasts. Then they dispatch a bunch of creatures to go see the king of the fire world. He is an older man with a son and daughter, and refuses to surrender. At that point, the creatures pretend to leave, but really storm up the side of the castle wall and enter the bedchamber of the Tegra, the princess. She is wearing only underwear, and the creatures snatch her up, throw her on their backs, and carry her off.

The movie now becomes about getting her back. When we are not with the king and his men, we are with Tegra and the creatures that have kidnapped her. She spends the entire movie in this underwear, which is a thong and a bra, and it is pretty graphic. While there isn’t any nudity in the movie, her outfit comes pretty close. And the movie has fun with that, never shying away from it, and sometimes showing close-ups on what she is wearing as if the camera is following right behind her while she is crawling.

The movie takes us onto the battlefield where the creatures have attacked one village and left the people of the village for dead. There is one survivor, a young warrior named Larn, who is also not very clothed. He waits until after the creatures have left and then catches up with them. When he finds them, they have the princess there with them.

Larn is the hero of the movie and continues to try to get Tegra back. He does succeed at one point, and hides with Tegra, getting to know her. But then the creatures show up again and take Tegra away. This time Larn finds someone else to help him. It’s a man named dark wolf, which wears an animal hide for a mask and carries a giant battle-axe.

Dark Wolf is by far the coolest looking character in the movie, only we never learn very much about him. I do like that we never see his face, but we could have used a little more story about the character. Instead, he is basically here just for the action and helping the kingdom. Maybe he could have been a bounty hunter, like bubba fett to star wars, and he could have been sent by the king to get tegra back.

As the movie goes on, the action builds up, there are some fantastically violent scenes with creatures getting stabbed and slaughtered. Aside from that, the set pieces where all of these action scenes take place are also pretty neat. They fight on the sides of Ice Mountains and cliffs. It’s all a lot of fun.

In the end, we get scenes of flying beasts that look like pterodactyls from the dinosaur age, and a climax where the villain has the magic ability to freeze his enemy temporarily as the enemy is attacking. Every time dark wolf raises his axe, nekron freezes dark wolf as if holding up a force field that his enemy can’t break through. It becomes a little annoying and repetitive after a while, but these are minor complaints when the whole movie is so well made.

Fire and ice is a cool movie because of its action and its fantasy atmosphere. The different creatures are great and so are all of the outfits. While the violence is what makes this movie work more than anything else, what hurts it is a storyline that really isn’t all that creative. This is basically the movie about a princess who is kidnapped and the warriors who go after her. Maybe if there was a little more to the characters, such as dark wolf, this could have been a more interesting film. Still, it is pretty good, with lots of excitement and great action. In many ways it reminds me of the lord of the rings films, with the good guys being humans and the bad guys being monsters. It is definitely the best Ralph Bakshi movie I have seen, and an enjoyable fantasy experience.