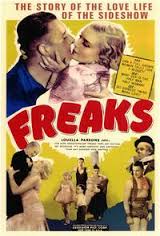 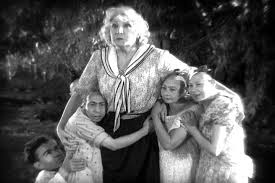 A Tales From The Crypt-like story of betrayal amoung circus-folk at a freak show, this movie is entertaining, but more about spectacle than story.

Like an old, suspense film that is created solely for the purpose of leading us to a twist ending, freaks has a very liner story with only one objective. it’s the story of a woman who betrays the freaks and what they do to her. The freak show itself is the background atmosphere, but the read story exists between this woman and the midget who has been convinced that she is in love with him. this midget, hans, has a friend, frida, who looks out for his well-being. she can tell that the beautiful Cleopatra is up to no good, and tries to stop her. The story might be interesting, but the problem is that there are no side plots. everything exists just to give us this ending. It is a cool ending, and the story about these three main characters holds our attention, but the movie could have used more about some of the other characters as well.

Freaks is an interesting movie. It’s the film that chronicles the events of a freak show more than any other movie ever made. This film is so well known for that exact reason. It’s not just that it’s the first One; it’s also that it’s pretty much the only one. Now there’s the television series,  American Horror Story,  Freak Show, with one season devoted to this setting and atmosphere. This much earlier film by Todd Browning, who found a way to make an absolute cult classic, heavily influences that show.

Freaks is about the setting and characters more than anything else. By characters, I don’t mean the inner arcs or changes or personalities of these characters. I don’t mean the way they act and react to circumstances around them. Instead, I simply mean their appearances. Most of the characters here are not given any personality at all, or at least nothing memorable. Instead, they are used as showpieces to grab our attention until the next deformed person shows up on screen.

At the start of the movie we meet two Siamese twins who are conjoined or stuck together. One of the girls is dating a man at the show and when she wants to leave, she makes the excuse that her sister has to be somewhere. The man gets frustrated and says that she’s always using that excuse. We meet a number of other characters too, like a man with no legs who moves around by dragging his chest on the floor with his hands.

The story doesn’t really start until we meet Hans. He’s a midget, who always dresses nicely in a suit. Hans is good friends with a woman midget, Frieda, who also works at the show. She clearly has a thing for Hans, but their relationship seems as if its not meant to be. That’s because Hans is in a relationship with someone else.

He has been having a love affair with Cleopatra, a regular woman, for some time now. Only Frieda is suspicious of Cleopatra. She has heard what other people at the show are saying about Hans and Cleopatra, and how the woman is playing him for a fool, and only Frieda has the heart to tell him. Hans has a lot of money, and the word is that Cleopatra is interested in him only because she plans to acquire it.

Frieda goes to Hans and tells him what people think of his relationship. Hans is not interested. He doesn’t really care if people are gossiping about him and claims that they are all just jealous of what he and Cleopatra have together. He plans to prove that their love is real by marrying her. This makes Freda even more upset.

Not long after the scene with Frieda confronting Hans, we learn that her worst fears are true. Cleopatra is actually dating someone else, a full-sized strong man, and she is hiding the affair from Hans and everyone else. Freda now goes to see Cleopatra, pleading with her to call off the wedding. She tells Cleopatra how much Hans loves her and how awful it is, the way she is playing with his feelings. Cleopatra is not interested in hearing any of it.

And so the wedding takes place. Cleopatra gets drunk and ends up kissing her strong man boyfriend in front of everyone. All of the freaks start shouting out about what they plan to do to her, singing a song that goes< “one of us, one of us.” they plan to turn her into a freak like them.

Cleopatra then goes even further. She puts some poison into Hans’ glass and drugs him. Hans gets violently sick, but does not die. When the doctor reveals that he thinks poison was involved, Hans has reached his leapt wit. He gives the order to the other freaks to do their worst to Cleopatra, and that’s exactly what they do. We see them all crawl up to her trailer on a dark and stormy night, and then the movie fades to black.

The next time we see Cleopatra, it’s during a part of a presentation where a man explains to an audience how they are about to view the most disturbing freak of all. Then we see her, without any arms or legs, moving around and making noises like a chicken. It’s either funny or disturbing, depending on how you look at it. The whole movie was really leading up to this moment, and it’s definitely a cool reveal. The problem is that the storyline itself was pretty simple and one-noted. This was basically the story of a woman having and affair and drugging her man, ands then how the man retaliates. That’s hardly enough for a movie, and there really only appear to be three main characters, Hans, Cleopatra, and Frieda. Freaks definitely has an exciting ending, but the story that gets us there is just okay.