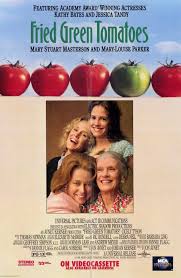 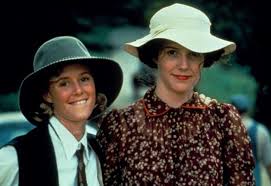 A somewhat slow, occasionally interesting movie that only really starts to get good in its second half.

Fried Green Tomatoes is a very slow moving film in it’s first half. There is little happening here that we haven’t seen before, and whatever excitement there is during that half, is poorly timed and paced, so as to leave us with large gaps of time where little of interest is going on. Then in the second half, the movie changes. It suddenly becomes a lot more interesting, with new plotlines coming out, such as one that involves a murder case and a trial. The second half of the movie might be a lot of fun, but it doesn’t make up for how slow the first half was. This is an overall okay movie, better than films that are slow the whole way through, but definitely lacking some gusto in it’s first half.

Fried Green Tomatoes is an okay movie. I’m not really sure why it’s so well known, when the Ruth is that movies like this are made all the time today and are a dime a dozen. And none of them are very fresh or original. I’m guessing that this movie was made at a time when dramas about character reflecting on their youth and the days of being wild and stupid were not all that common. I’m talking about movies like Thelma and Louise, Legends Of The Fall, and A River Runs Through It (all coincidentally starred Brad Pitt.) these movies were fine for their time, and legends of the fall in particular is a very good film, but if any of them turned up in theaters today, it wouldn’t get very far with originality.

These movies are all period pieces with small stories to tell as opposed to big ones of changing worlds. If you look at movies in theaters today, it’s all big apocalyptic stuff. From This Is The End (Seth Rogen and friends) to The Worlds End (Simon Pegg and friends) to World War Z (Brad Pitt) to Elysium, it’s all future sci-fi or big budget end of the world extravaganza. It’s either that or superhero movies. If a drama does come out, it’s certainly not going to be a period piece. The last one of those I remember was Lawless, with Shia Labeuf and tom hardy, from about a year ago, and that movie sank fast and hard at the box office.

Maybe the reason why those period piece dramas stopped working is because they weren’t fast moving enough. This is certainly the case with fried green tomatoes. Now I’m not saying every movie today has to be fast moving and exciting. I liked the movie the sessions from last year, about a sex surrogate. But every movie today does have to be fresh and different, and that’s something that we were just weren’t getting with those period movies. Look at a river runs through it, which was incredibly boring and uneventful at nearly every moment.

Fried Green Tomatoes aren’t even close to as bad as that film. This movie is just slow in its first half. It’s about one woman, Evelyn couch (Kathy Bates), who goes to a hospital to see someone related to her husband. The girl in the hospital does not want to see Evelyn and even throws things at her on two separate occasions. We never see this girl, or learn much more about her, but instead join Evelyn in the common room of the hospital, where she befriends an old woman and listens to the woman tell stories.

This woman is Mrs. Threadgoode, played by Jessica Tandy, and she starts off her store talking about murder. That gets Evelyn interested right away, and us too. She talks about how a girl named Idgie (Mary Stuart Masterson) was accused of murder and we see a car gets lifted out of a lake. All of this catches our attention, but the problem is, the movie doesn’t get back to that story until about an hour later. Now I do appreciate that this movie didn’t make us wait until the end to hear about the murder, and brought it back at about the halfway point, but even still, that meant an hour before the movie got interesting again.

As it happened, that was exactly the case. There is some excitement early on in Mrs. Threadgoode’s story, as something happens to the character played by Chris O’Donnell, but this happens to him way too early in the movie, and leaves us with little excitement after it’s done. Basically the timing of the exciting events is handled very poorly in this film. Characters are killed when we barely got to know them, and that means we don’t really care enough about them to feel the full blow of them being killed.

Other than the Chris O’Donnell business, which really happens very early on in the movie, there is only one other exciting scene in the first half. That scene involves a character named Ruth (Mary Louise Parker) getting kicked down the stairs by her abusive husband when her friend, Idgie comes to rescue her. Aside from that, the first half is really just dull storytelling.

But in the second half of the film, something pretty great happens. Every story starts to get better. There’s the story of Ruth’s husband and what happened to him, and there’s the story of Evelyn couch learning to be more assertive in her life. The story of Ruth’s husband involves the KKK paying visits to some of the locals in town and having their way with the hired help, who is a black man that has been with a family for ages.

This second half of the movie involves a mystery about the possible murder of a man, and trying to figure out what really happened to him. At one point there is even a trial, and we get to see testimony and arguing between the lawyers with the judge. Where was all of this excitement in the first half of the film? It’s almost as if we are watching two different movies, from one half to the next.

It is unfortunate that Gried Green Tomatoes were so lousy for that first half, because the second hour really pulls itself together. I suppose this movie rewards patience, but it just seems like things could have been done more efficiently during that first hour. Take the Chris O’Donnell situation. There was no reason to make that happens so soon, leaving us with little else for excitement. Kathy Bates is a lot of fun here and often gets laughs with the story of her character, but it’s not enough. Period pieces are hard to make because they have to maintain our interest the whole way through, and that means exciting situations. This movie has them in it’s second half, but is sure missing them in its first.