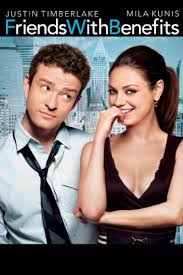 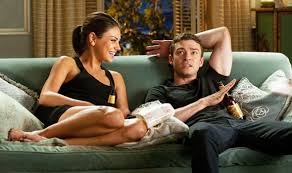 The much better version of the Ashton Butcher-Natalie Portman movie, No Strings Attached, this one is actually well made and good for a few laughs.

Friends With Benefits are by no means a great movie, but it is still kind of fun in a way that doesn’t insult your intelligence. It’s hard to make a good movie out of this Generic plot about two people who start out as friends, make a sort of contract together about sleeping with each other, but not getting attached, and then of course, do start to develop feelings as the film goes on. While the plot might be routine, this movie actually finds different ways to spice it up, such as a strategically placed trip to California that takes place in the second half, and introduces us to new characters with problems of their own. Sometimes the movie is dopey (Patricia Clarkson’s character is kind of cartoonish), but for the most part this is a pretty enjoyable film. Most of the credit should be given to Justin Timberlake and Mila kumis that handle the material like pros.

Friends With Benefits are surprisingly a pretty good movie. That’s probably because its two stars both have so much presence and work really nicely together. These actors have chemistry and are fun to watch. We’re talking about Justin Timberlake and Mila kumis, two actors that are both becoming more and more relevant as they continue to take on interesting projects. There’s no question that this movie isn’t one of them, and is just a throw away film, but even still, with these two stars on board, they make it something much better than it otherwise would have been.

The movie starts with some quick cuts between Dylan (Timberlake) running to meet a date outside of a theater and Jamie (Kumis) impatiently waiting for her date to arrive. It’s done in such a way that we really think Dylan is going to be meeting Jamie, and it turns out we are actually watching two different stories. Dylan’s date is Emma stone and Jamie is standing outside waiting for Andy Samberg. This move, of playing around with the audience, works out pretty well for the movie, because this is the kind of film where the audience thinks they can predict everything about it. Instead, the movie shows us right away, that we can’t.

We know, for example, that the two stars are going to end up together, and we know that even though the premise of the movie has them make a deal where they won’t get attached to each other and will just use each other for sex, we know that this won’t last. By the end of the movie, these two will definitely have real feelings for each other. So if we can already predict the ending, then we definitely are primed to think the movie is predictable the whole way through. Starting the film off with the scene where we think the two of them are meeting up with each other, and then it turns out they aren’t, tells us right away that this movie will try to be a little smarter and a little more clever than we were expecting. When we think they are about to meet each other, we start thinking that there will be one scene of them fighting or something, and then the movie will skip back to three months earlier or something like that. Finding out they are not really meeting each other changes all of that.

The real story of these two begins with Dylan coming to New York for a job interview and with Jamie being the head hunter who brings him around and tries to get him interested in the job. She works for the company and tries to bring them the best person for the job they are looking to recruit for. When Dylan sees her for the first time, Jamie is standing on the baggage carousel at an airport, trying to find her sign that she made, which says Dylan’s name on it. This is one of those quirky, cute scenes that are very generic and silly in movies like this. Luckily the ideas get better.

The two of them start hanging out around the city, with Jamie taking Dylan out and showing him some of her favorite spots. One of these is the top of a building where nobody is allowed to go, and where Jamie just lies down on the ground and looks up at the sky. This comes into play again, later in the movie. Dylan takes the job and starts living in New York, hanging out with Jamie. Soon they have become pretty good friends, going to parties together, playing games with each other, and watching movies together.

Then one night, while talking about relationships and how much they both hate them, the two of them decide to give it a shot. Not a relationship, but a friendship with sexes as just an extra bonus. It takes a little bit of talking out and negotiating, but in the end they decide to go for it, and the movie is very smart to actually show us lots of sexual encounters between them. If this is going to be the premise of the film, then why not really show it and have some fun with it? This movie does.

As the movie goes on, it does hit all the usual beats. That means each one of them has a friend who they can speak to for advice. In the case of Jamie, this friend is her mom, played by Patricia Clarkson. Her mom is like a young kid who gets with guys left and right and refuses to commit. She doesn’t even remember who Jamie’s father was. In the case of Dylan, his friend is a guy who works at the company with him, a gay man played by woody Haralson. The little details this movie sometimes throws in, like that Harrison’s character has his own small boat because he doesn’t like public transportation, are pretty funny.

During a holiday weekend when everyone is with their family, Dylan invites Jamie to come out to los angels with him. She agrees, and the two of them go out there to meet his family. This is where the movie really starts to get good. It doesn’t play everything for laughs and instead, gets into some serious situations, like one where Dylan’s father, played by Richard Jenkins, has a serious case of dementia and is losing his mind.

Another great thing that happens is the overhearing of something and the inevitable fight. Every romantic comedy has this beat towards the end where the characters look like they are going different ways before they come together in the end. Another Mila kumis example that comes to mind right away is forgetting Sarah marshal, with the Jason seal character leaving Hawaii and going back home after their fight. Here, in friends with benefits, things happen a little better than they usually do. The two characters don’t have a big fight and have it out. Instead, Jamie discovers something she’s unhappy about and leaves Dylan without any explanation.

There is plenty about this movie that would lead one to lump it in the same pile as most lousy romantic comedies. Anytime the movie goes too far into getting unrealistic just for the sake of comedy, we approach those lines. The flash mob scenes are great examples of this. Despite things like that, the movie never goes too far into ridiculousness or over-cuteness. Characters have real problems, and the movie definitely gets a boost from the trip these characters take to California. Those scenes bring in Richard Jenkins and Jenna elf man, and by the time the characters head back to New York, the movie has definitely gone up a few notches.