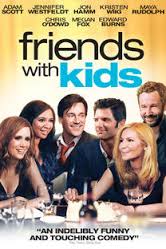 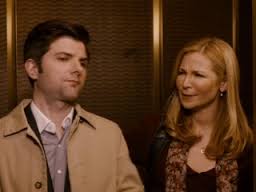 A pretty good movie with an interesting plot and lots of enjoyable humor.

A smart movie, this one combines comedy with romance pretty nicely. It’s not as funny as some of the more recent great films that tackle both subjects (Bridesmaids, Knocked Up, The Forty Year Old Virgin), but this movie is a little more plot driven than it is comedy driven. that means the movie takes it’s time presenting the situation and decision two characters make and the reasons why they would make that decision. I like the way the movie puts us in their shoes and lets us see things from their point of view. It does get a little too routine by the end, but that’s forgiveable since everything that came before it was so much fun.

Friends With Kids is a good movie, but it’s not in any way what they want you to think it is. The movie is going for the Bridesmaids crowd. At least that’s what the advertisements are going for. The casting alone, and depiction of everyone on the poster makes that pretty clear. Only this movie is no bridesmaids. Whereas that movie was more of a Judd Apatow creation, meaning comedy first and everything else after, this one is more of a genuine romantic comedy. Apatow’s movies like bridesmaids and knocked up and The Forty Year Old Virgin focused as much on the character’s crazy lives (jobs, roommates), as they did on the relationship. Romantic comedies go at least 80 percent on the relationship. This movie is one of those.

The thing about Judd Apatow movies is, they might have romance in there as the primary plot, but they are comedies first. The romance part is pretty much on the back burner compared to its number one priority, which is making us laugh. Friends with kids don’t quite make it into that category. Instead it just a solid entry into the romantic comedy genre.

That means it’s a romantic comedy with an interesting twist. All the best ones in that genre have it. Sleepless In Seattle, my best friends wedding, there’s always something unique about these movies. In friends with kids, the unique thing is that there are two characters that are friends, and never looking to be anything more. They both want a kid, but are not interested in each other. And they both want the freedom of being able to go out and date. So with the solution they propose, each one of them only has to be responsible half the time.

The people in this situation are Jason and Julie (Adam Scott and Jennifer Westfeldt.) a movie does a really nice job of setting up their position and the events that would lead them to making such a decision. We start the movie off by seeing them both in bed, in two separate apartments, talking on the phone to each other. The catch is that we pull back on each one to see that they are both in bed with someone. The person each one of them is in bed with is asleep, and both of them talk on the phone to each other about that person. It’s a funny scene, but it also shows us that they value each other more than the person they just slept with.

Next we see the characters going out to dinner with their friends. There are two couples here. The first is Leslie and Alex (Maya Rudolph and Chris O’Dowd.) the second one is missy and Ben (Kristen Wig and Jon Hamm.) now all four of these actors were in bridesmaids. In fact, they were the stars of bridesmaids. None of them is the star of this movie. But all six actors make it onto the posters, which is why I think this movie is going for the bridesmaid’s crowd. It’s easy to see how all the actors got involve if you think that westfeldt wrote and directed the movie, and that she is longtime partners with Hamm. He did bridesmaids for Kristen Wiig, and the others did this movie for him. The funny thing is that without those adds, a lot of people, including myself would never have seen this movie. Put just Adam Scott and Jennifer westfeldt on the poster with a baby, and it suddenly looks like every other movie out there.

At the dinner scene, with all of his or her friends, everyone is happy and drinking. One of the couples even sneaks off to the bathroom to have sex. Everything is great. But one of the couples announces that they are pregnant. Cut to four years later and now the two couples both have kids. Everybody goes to the house of Leslie and Alex and they are an absolute mess. Alex is in the bathroom when people arrive, where apparently he has been for the last forty five minutes, reading an article, while Leslie has been running around getting the place ready.

At this house party dinner, the missy and Ben couple is no better. In fact, they might actually be worse with all of the eye rolling and rude comments made at each other. When Jason and Julie leave the house, they ask each other what happened to their friends. These people are mean and terrible to each other. They start to talk a little more about why and how their friends changed. Through conversations they realize that pregnancy is hell for the couple for nine months, and then after that, when things should go back to being great again, nobody sleeps for at least a year, with the baby waking up in the middle of the night, every night. Suddenly they see why things have changed for their friends.

After talking it over carefully, and realizing that Julie is not getting any younger and needs to have a child soon, if she is going to at all, Jason and Julie decide to do it together. The final idea that leads them to this is thinking about how the ideal situation would be to have a kid, be divorced, have to handle custody and responsibility for the kid only half the time, and be free to go out and date other people. The movie does a really nice job of explaining the thinking behind this plan very carefully.

The movie does show us the first time Jason and Julie sleep together, and has some fun with how awkward it is. But then it inexplicably skips over quite a lot. It skips over every other time they slept with each other, leaving us uncertain if maybe she got pregnant their first time doing it or not. And then, even worse, it skips over her entire pregnancy. We go from seeing them in bed with each other to seeing her on the delivery table having a baby.

The rest of the movie is about them dating other people while their friend’s relationships falter. Jason dates Megan Fox. Julie dates Edward Burns. And in the end, it’s pretty obvious what ends up happening. I don’t love that the movie ended the same predictable, clichéd way you knew it was going to end. When Jason drives away, after the two of them have a bit of a fight, you just know he’s going to turn his car around and drive right back. But even still, there are good things at play here. For example, the moment when things seem so right, and Jason goes in for that romantic kiss doesn’t work out the way it does in every other movie. Instead, we get more of the reaction Kate Hudson had to being kissed by Larry David in clear history. I love when movies go against the grain like that. Friends with kids have a lot going on. It’s a pretty cool movie, different than most romantic comedies and definitely well thought out. There are some missteps here and there, but overall it’s pretty good.