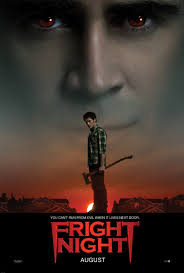 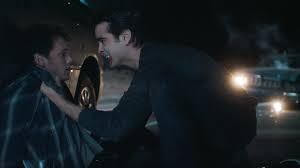 A lousy first half, but much better second half make this mix of disturbed and Jennifer’s body somewhat enjoyable, but certainly nothing fresh.

Fright night is a remake of a 1980s movie about a vampire living next door, it’s one of those premises that seems so simple and basic that it’s no surprise it came out of the eighties teenage vampire craze. That was a time when movies like The Lost Boys and the Monster Squad and even the gate, surged with popularity. It was a much simpler time where imagination ruled and realism went straight out the window. The new version of Fright Night might start with the same initial premise, but it certainly tries to update things for this post-blade, post- true blood, post-twilight world.

Teenage vampires have clearly become a big thing in the last five years. Bigger than they ever were before. The same can be said of zombies, with shows like the walking dead delving out weekly episodes of brutality and horror on television. And fright night means to tap into all this while maintaining some of that eighties teenage vibe that kick started the whole thing off.

The problem is that the premise of having a vampire live next door that is a secret killer is just not fresh at all. Even if we bring it away from the world of vampires and monsters, there are movies like Disturbia, which are all about having a killer for your neighbor and spying on this neighbor. And this film is probably more like that movie than any entry in the vampire genre from the past few years.

And the big problem with the movie is that the first half is both routine and stupid. There isn’t a single cool moment or surprise in that entire half. We meet Charlie (Anton Yelchon) early on, and pretty quickly learn that he used to be a nerd and grew up with nerd friends all his life until over the last few years he started becoming popular and cool. Now he has a hot girlfriend and cool friends, like mark (Dave Franco, jams Franco’s younger brother.)

His old nerd buddy, end, (Christopher mints plissé), comes to see him claiming that one of the guys they used to be friends with has disappeared. The kid is absent from school and end is convinced that a vampire has killed him. End is also convinced that Charlie’s new next door neighbor, jerry (Collin Farrell), is that vampire. And Charlie never thinks to ask end any questions about why he believes this. He doesn’t exactly believe end, but he doesn’t ask his old friend for any reasons either.

Instead, Charlie and end go to see the house where their ex-friend lived and snoop around the deserted place. It would be fine if this was the only scene like this, of sneaking around in a house where you don’t belong. But the movie keeps repeating this same situation over and over again. End walks back home and finds himself being attacked by jerry. Now end is not showing up to school.

So Charlie goes over to end’s house and starts snooping around in his room. That’s the second scene of this, snooping around in someone’s house where you are not supposed to be. Charlie takes a nap in his house and wakes up to the sound of a scream. And instead of thinking that maybe it was a part of his dream, or that he imagined it, or that maybe it was just a loud movie being watched next door, he calls the police.

When the police show up and check jerry out and then leave, Charlie decides it’s his turn to break into jerry’s place and snoop around. This is the third scene like this all in the first half. It’s not only repetitive, it’s also dumb. And to make it even worse, jerry is aware that Charlie is in his house, trying to sneak a girl out, and jerry just stands back and watches. He has this perfect opportunity to kill Charlie, not needing an invitation to get into his own house, of course (vampires need an invitation before they can set foot in somebody else’s home), and he doesn’t take it.

At this point, the very lousy first half is about to end. It really comes to a crashing halt when jerry shows up at Charlie’s house and set the place on fire. That leads to n attack and chase on an abandoned highway road, and then a pretty cool second half of the film. It’s in the second half that all of the monster stuff and cool effects come out.

It’s also in that second half that the lousy plot ideas turn into cool action scenes. Charlie convinces a Vegas magician to help him slay this vampire, and the two of them strap up and go hunting for jerry. Things really do get better and better as this movie goes on. There’s a fun attack inside the magician’s home that involves some very cool weapons. And then when the boys go after jerry, they find all kinds of surprises. This movie really does turn up the heat starting with that highway chase. I love the image of jerry under the car and then the vampire claw coming through the floor. It reminds me of cape fear meets Batman (the Tim Burton version), with the joker’s hand emerging from the vat of acid. Fright Fight is not a very good movie, and that’s mostly because of it’s lousy First half. The second half of the film, however, brings it to a whole new level and really does save the movie from the direction it was headed. In the end the movie turns out to be pretty decent and watchable, and even at times kind of fun. The computer effects work here and the name cast, including Toni Collette, Anton belching, Christopher mints plissé, and Colin Farrell, really help the movie along.