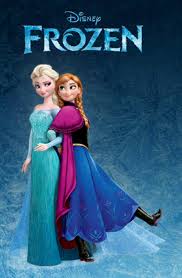 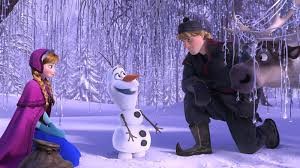 Just like the great disney movies of the nineties, this one uses fantastic singing and magic to tell a cool story about a fantasy world.

A really great movie, this one combines computer animation with some amazing musical numbers. It basically does everything right, including an unusual and creative story about two sisters and how one of them has a gift that turns out to be more of a curse. There are twists and turns in this movie, as well as setups in the beginning to how characters from later in the film get to be the way they are. This movie is incredibly smart and interesting and there’s even some pretty good humor mixed in there too.

Frozen is a wonderful movie. It is a film that combines the old with the new, making something that feels like an old Disney movie, (complete with amazing musical numbers and singing characters,) and puts it together with the kind of state of the art computer effects we have come to expect over the past two decades. Toy Story kick-started the CG animation craze, back in 1995. There really hasn’t been much 2D animation since then, and there certainly haven’t been any great musical, animated films. Frozen is a return to that kind of glory.

The movie is about two sisters that find themselves in an unusual situation. At the start of the film, we are with the sisters as kids, with one of them waking the older sister up to go and play in the snow. No sooner do they get downstairs, do we learn of exactly what their situation is. Elsa, the older sister, has a gift. She can turn things to snow and ice. It just shoots out of her hands. It’s strange and surprising to see this sort of magic from the very start of the film, without seeing the character have something happen to her that would give her such a gift, whether it be a curse (like the start of the beauty and the beast) or an accident (like in the fantastic four.)

so right away the movie gets our attention with this magical gift that Elsa has, but then it gets turned into a problem when her little sister, Anna, runs too fast and Elsa can’t keep up with shooting piles of snow in front of her. Elsa slips and fires snow at the same time and it hits Anna’s head, sending her to the floor, unconscious. The parents of the girls come in and take Anna to some trolls who do magic on her and get the snow out of her head.

Only the trolls have some ideas about how things need to change. They tell the parents that there can be no more of this snow magic and that Anna must never know of what happened. All memories of the magic are wiped from her head, and Elsa must more or less go into hiding. That means wearing gloves over her hands that cover her gift, locking the doors to the palace, and telling Elsa to stay away from her sister, and no longer play with her. it’s safe to say this movie is loaded up with conflict from the very beginning.

It’s also got some cool character developments happening at the same time, that we don’t necessarily realize until later in the film. That’s because we are watching the story of a character who is not important just yet, but will turn out to be very important later on. This is a boy named christoph, who will later become the love interest of the film. at the start of the movie, we see him first with ice makers, as they work the ice creating blocks of it to sell. then we see christoph again when the parents take anna to see the trolls. christoph follows them there and finds the trolls. this will be the reason why he ends up getting raised by them.

the girls grow up into young women with elsa pretty much ignoring anna, locking herself in her room, and staying away from her sister as much as possible. then one day the parents go away, on a voyage at sea, and their ship gets hit by a massive storm. the parents die and elsa becomes the queen. she has a coronation day, which is like the big ceremony to swear her in, and it’s on that day that everything goes wrong. for anna, it starts out seeming like everything is going right, as she meets hans, the man who is kind, funny, and dreamy. anna falls head over heals for him, and has a couple of meet cutes and dances and even a great duet. by the end of it, the two of them have agreed to marry.

anna and hans go to tell this news to elsa, and that’s when elsa loses control. she lets her rage lose and fires snow out at the people, revealing her ability. the people are terrified and consider elsa a monster. she runs away, leaving the kingdom behind, and anna decides it is up to her to ride out into the wildnerness and rescue her sister. this becomes the journey of the movie. but there is more at play here besides just bringing elsa back. when elsa ran off, she took any decent weather the land had, with her. that means she made it so that it is now winter, all year long. anna goes seeking elsa, not just to get her sister back, but to also return summer to the kingdom.

along the way, anna meets christoph who agrees to help her for a fee. the two of them also meet a friendly snowman named olaf, voiced by the very funny josh gad. olaf is a great character, goofy and foolish in all the best ways. gad voices him perfectly, and the movie has lots of fun with all the different things they can do with a snowman. these include playing around with his carrot nose, separating his three parts at different times, (like when he shouts, “watch out for my butt,” as his three sections are being thrown at a pile of snow where another character is sitting,) and having this snowman love the idea of summer, not knowing that he will never be able to experience summer because he will melt. nobody has the heart to tell him.

the story is great because it is unique. sure every movie is about a quest and setting out to accomplish something, but with this one it is so much more than the usual romantic quest of trying to break a curse or finding true love, or both. in this movie, the major bond is between two sisters, and not between two romantic interests. on top of the great plot, the visuals are tremendous. the ice and frosty snow looks terrific in every scene. especially when things freeze up. there’s a fantastic scene where elsa builds an ice castle out of scratch, playing around with her ability, little by little, to see what she can do. then there’s another great snow moment where the characters first get to the north mountain (where elsa lives), and walk through treees covered with frozen leaves. the sounds of these leaves brushing against each other are like glass chandelier pieces knocking gently against each other. and the look of the whole scene is incredible.

there’s a cool surprise ending, which really just amounts for one more great quality this film has to offer. but one of the biggest of these, has got to be the music. every song here is fantastic, and the characters belt them out with wonderful precision. one song after another lands perfectly, and the visual gags which go along with them, all work out pretty well too. there is so much to like about this movie, starting with the atmosphere, which really gets this cold, frozen environment down. the story is creative and the songs are all terrific.