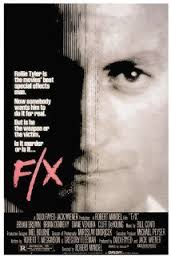 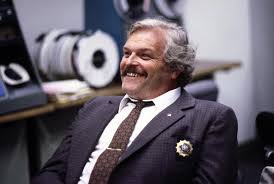 An intense and clever thriller on the same level as the kind of movie hitchcock would be making if he were alive today.

F/X is a terrific thriller. There is no question about it, if Hitchcock had made this movie, it would have been one of the better Hitchcock films. Maybe not up there with his three best (Rear Window, psycho, and Vertigo), but more closely on the levels of his fourth and fifth best, North By Northwest and The Man Who Knew Too Much (Stewart version). That is because those later two movies were about a man who was thrown into a situation he did not belong in and had the wool pulled down over his eyes. So did the character in vertigo for that matter, and F/X has this element in common with all of those films.

Just like in Vertigo, the character is not just an everyman who happens to be at the wrong place at the wrong time. Those are the plot lines of north by northwest and the man who knew too much. However, with Vertigo, the character was a detective, accepting a case from someone he was not sure if he could trust. Similarly. In F/X, the main character, Roland Tyler, is a special effects man accepting a job that only he can do. In addition, just like in Vertigo, his employers seem a bit too untrustworthy.

The mission that Tyler accepts is an extremely creative one. There is a mobster, named Nicholas Defranco (Jerry Orbach), who is ready to roll over on the mob and give up information. Only the mob has found out about it and has put out hits on him. The only way to get them to go away is if the mob thinks that defranco is already dead. That is where Tyler comes in.

Since Tyler is an expert on makeup and special effects, the guys working for this government agency hire him to stage the whole thing. He makes a plaster mold of defranco’s face and wires the guy up with squibs so that when Tyler presses a button on his gun, squibs go off on Defranco’s body. It is a neat trick. In addition, it looks like Tyler is all set to go when the government agency throws another curve ball into the mix.

They tell Tyler that since he is the one who really knows what he is doing with all of this, he should be the one to shoot Defranco. He should be the one to walk into the restaurant, pull the trigger, and be there to make sure everything goes off as planned. In addition, Tyler agrees. The shooting in the restaurant scene is a big moment in this movie. Everything that has happened so far has been leading to this, and after it is over, we wonder where it is going to go. The scene is so big and so important, and staged so carefully, that it reminds me of the restaurant shooting scene in the godfather with pacino going into the bathroom and retrieving a gun from above the toilet before coming out and shooting.

The shooting goes off just as planned and everything seems to be great until Tyler gets into the car with the agents and realizes that things aren’t the way he thought they were. This would be plot point two of the movie, the moment that completely changes everything. Plot point one, of course, was when Tyler was approached with the mission or when he decided to accept it. Now, after the realization about these agents, Tyler will be headed in a different direction than he was previouthsly in, for the remainder of the movie.

There is a lot that I love about this movie. Everything in the storyline that I have mentioned so far is terrific. So is the fact that Brian Dennehy is the second star of the movie, right behind Bryan brown, which plays Tyler, and yet Dennehy has not even appeared yet. I love that he does not come in until almost halfway into the film. It is the movie’s way of saving something exciting for later on. It is a way to keep things fresh.

Another thing that I love is that the twists are not over yet. We might think that we have seen a whole lot of twists and finally know what is going and can settle our minds, but we would be wrong. That is because now Tyler thinks that he killed defranco for real and the government agents wanted defranco dead and set Tyler up to do it. Alternatively, maybe the agents are being played by the mob and this is their way of getting defiance murdered and setting up a fall guy to take the charge. Whom exactly these government agents are working for, is a question that remains open into the later parts of the movie.

In the final sections of the movie, we finally start winding down into generic territory. When Tyler stalks out his pray in a mansion, we might be getting cool special effects tricks here and there, but it is still no different than any other movie where the hero comes after the villain and all of his friends in their home at the end. I have two other examples that come to mind of movies that ended this exact same way. The Limey and Haywire. Now, I do love the special effects tricks that are used here, but for a movie that has felt incredibly fresh, original, and creative the whole time, ending in the usual way is not doing justice to everything that came before it.

F/X is a fantastic movie. It might end in a standard manner, with a climax that we have seen before, but up until that ending, everything is terrific. Even just the idea of setting this movie in the world of Hollywood magic and special effects wizardry is cool. I like that the movie does not just push that off to the side, but shows us how it all works. Tyler has a giant monster that leaps forward whenever someone walks through the door, and his gun – squib – button trick is explained in detail. The story moves quickly and keeps us guessing. The surprises all hit us strong and the movie definitely keeps us on the edges of our seats. I think it is only a matter of time before this movie is remade.