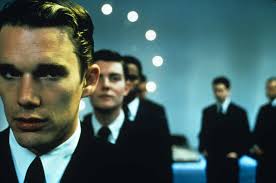 It’s got a cool premise and environment ideas, but when it comes to actual story and individual scenes, this movie doesn’t have a whole lot going on.

There’s a lot to like about Gattaca, starting with its original take on the future. It’s a place where children can be genetically created in a lab and have all of their DNA and dispositions predetermined before they are born. What that means for the adult life is that some adults are superior and genetic powerhouses, and others are not. The ones who aren’t can’t even compete for the same jobs as the ones who are. All of this is pretty neat and so is the idea that our hero needs to switch identities with somebody who is a genetic success in order to get what he wants. But once a murder mystery storyline begins, the movie surprisingly goes downhill. I say surprisingly because a murder mystery is usually the kind of thing that sparks excitement and puts energy into a movie, but here it is all handled poorly, and we are left wishing the movie handled at least some of it’s ideas a little better. Lots of potential, poor execution and follow-through.

Gattaca is a movie that works on premise and principal, but not on a whole lot else. It’s got a great distopian take on the future and finds it’s own way of presenting a sort of Fahrenheit 451 tale where everything is controlled and manipulated by the higher ups with authority. That being said, this movie might have the same tone as other films that have a bleak outlook on the future, but the ideas here are all creative and fresh. It’s not that basic freedoms are limited, like in those other stories (Equilibrium, The Giver), but more of a story about DNA.

The situation is that the wealthy can buy good DNA for their children. Everything can be controlled and manipulated so that before a child is born, the parents can pay for exactly the type of child they want. Even the lifespan of the person is predetermined so that it is known exactly what date the person will die. The main thing that this entire means is that some people are genetically superior to others. Our hero, Vincent Freeman (Ethan Hawke) is one of the less fortunate.

He was born to parents who had him the natural way and as a result, Vincent had a chance of having a heart problem in the future and of dying when he was in his thirties. After having him, however, his parents went and had another child, and this time they did it the genetically safe way. As a result, Vincent grew up side by side with a brother who was always better at everything than he was.

The present day story finds Vincent working as a janitor in a scientific research facility that launches rockets into space. Vincent has always dreamt of going up into space and seeing what else is out there, only his identity, DNA, and heart condition have made this dream impossible. Nobody who works for the company would ever put someone in his condition up in a rocket ship. All of this is setup and basic premise. It’s very interesting and unique, and so is what happens next.

Vincent comes into contact with a sort of black market Company that will switch his identity with that of a person who is genetically superior. That other person is somebody who had everything going for him, and then by some cruel twist of fate became crippled. Accidents do happen, and now that man, Jerome (Jude Law) is in a wheel chair. Vincent will pay to have Jerome exchange identities with him.

All seems good so far, and the plan is for Vincent (who is now assuming the identity of Jerome) to go up until space at the end of the week. But then something happens. A person who manages all of the flights and rocket launchings is murdered. Nobody knows who did it, but it seems like the man was on the verge of cancelling Vincent’s flight, and so it seems like he should be a suspect.

This is where the movie loses its momentum. You would think that a murder and mystery would actually be the strongest points of a film, and they certainly should be, only this movie handles all of those points the wrong way. It brings in an investigator, for example, played by the great Alan Arkin, and would you believe there isn’t a single scene where Arkin interrogates Vincent? Not one verbal confrontation between them.

Another inconsistency is that Vincent is working as a top technician, ready to take flight, in the same exact building where he was once a janitor. Granted he is no longer wearing glasses, but even still, not one person recognizes him or thinks he looks familiar? Not even the old man who worked closely with him as a janitor for years (played by the great actor Ernest Borgnine?)

There are some cool scenes every now and again, where Vincent has a scare as if he is about to get caught. The best one comes when the police head to Vincent’s house in search of him and Vincent has to call up Jerome and tell Jerome that the police are on their way. Jerome has to pretend to be Vincent and has to pull himself out of his wheel chair and up a flight of stairs quickly, before the police arrive. That is absolutely the best scene of the movie.

But unfortunately there aren’t enough that are like that. There also isn’t really any action in this film. I understand it’s more of a thinking sci-fi film than an action picture, but even still, the pieces are there. This could have easily been a Minority Report meets equilibrium, only both of those movies were action oriented and this one clearly is not. Another problem is that there are no other real suspects besides Vincent, meaning that this isn’t much of a mystery at all. And then there’s the romance between Vincent and a character played by Uma Thurman, and its actually not all that romantic at all. The nature of their relationship is not clearly defined, and the whole thing feels pretty forced. Gattaca might be a movie based on some pretty solid ideas, but the way the whole things comes together doesn’t really work out as well as it should have.