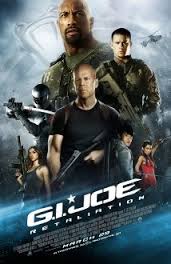 Better than the first movie, simply because the action is more real-looking, but the dialogue, plot, and everything else about the movie are all pretty lousy.

This movie starts out pretty cool and keeps that going for a solid first quarter or so of the film, with action that is semi-believable and well-choreographed and characters that seem like more than just cardboard cutouts. then the movie decides that it has to go bigger on the action, go less on the characters and plot, and the whole thing basically falls apart. the premise about a u.s. president impersonator is ridiculous and doesn’t really make any attempt to be otherwise. the action goes for transformers-like over the top cartoon fare, where we stop caring about anything that’s happening and the movie just get stupider as it goes on, leading to a completely uninteresting climax.

For a while, G.I. Joe: Retaliation seems like a pretty decent film. It’s all in the first half, and mainly in the first quarter or so of the film, where the effects aren’t too over the top and we actually get to spend a little time with the characters as regular people. we meet rip chord (The Rock) and duke (Channing Tatum, returning from the first film) as they are out on a mission in north Korea. They have a few scenes of sneaking into the enemies camp and taking out their target and the action is well-choreographed and not too over the top. Unfortunately that changes as the movie goes on.

We also see these two guys fooling around at home, taking it easy and having fun. in one of the best scenes of the movie, they are simply sitting around playing video games like regular guys. The irony is that they are playing a military video game, talking through head sets, and doing the things that they would actually be doing in real life. There is humor to the scene and the way it is presented, first hearing them talking over the radios and then seeing that they are actually just playing a videogame and not in real combat themselves. this level of humor, creativity, and personality is completely missing from the rest of the film.

on the positive side, however, the action is pretty good. at least in the first half. the first time we see technology used, it is simply fence cutters as a burning device that goes on the hands. ripshaws turns these glove cutters on, watches them turn red, and then moves his hands over the fence as pieces of it melt away. this kind of technology works because it is believable and not too extreme. compare that to some of the things we were seeing in the first film, like the accelerator suits or the green acid missiles which destroyed the eiffel tower and looked incredibly fake.

the problem with the movie is that the premise, about impersonating the president with an imposter, is pretty weak. the naked gun movies did it in the second film, and it was completely done as ridiculous farce. g.i. joe: retaliation attempts to take it seriously without ever giving us an attempt at explaining why or how it is being done. at least the mission impossible movies went into great detail to explain the masks and voice matching of characters so that we could get on board with the idea of a legitimate and believable impersonation. here, we get no such effort.

we get a scene of two bad guys being held in an underground, maximum security prison, where they are being kept in giant bubble tanks, suspended in water. for what reason are they being held this way? storm shadow,a ninja villain dressed all in white, is brought in as a prisoner, disguised as snake eyes. way to confuse us about who characters are before we have even met them for the first time. it’s a stupid move, but none that has any real consequence. and when a character named firefly (played by ray stevenson), shows up on a motorcycle that fires missiles into the entrance of the prison, we do get a pretty cool action moment.

it’s right about here that the movie starts to cross over into ridiculous action that goes way too far. i like that we get to see cobra without a mask on, letting us know that he is human after all, and that even when he does put the mask on, it is just a visor of glass at first. and i like that there are two villains in the tanks, with the other one being a character named destro. but then the movie kind of drops the ball on that and never tells us or shows us what happens to destro again. he suddenly goes missing from the entire movie. from what i understand, cobra was busted out of prisone while destro was just left there. i suppose they are saving him for the villain of another movie, but what was the point of having him here then, and how much cooler could the movie have been if he was actually in it?

it’s at about the halfway point of the movie that we for some reason travel to the himalayas. this is where storm shadow has been training and when he returns to his temple in the mountains. snake eyes, a warrior dressed all in black as if he is the gimp from pulp fiction, finds the hideout and attacks storm shadow. there are some cool moments in this fight sequence such as one character throwing out chinese stars, and the other one shooting them all down, but too much action and not enough believeability ultimately cause us to stop caring.

that’s when the movie has storm shadow suddenly realize that cobra has been playing a trick on him, pretending to be his old master, in order to get storm shadow to follow his command. it’s right then, as storm shadow makes this discovery, that an army of ninjas wearing red appears at the gate. now it’s time to fight outside the temple, on the mountainside. snake eyes knocks storm shadow out and is chased by the red ninja army through all kinds of cool ziplining paths along the mountains.

this is absolutely the coolest part of the movie. especially when the characters go sliding around on these zip lines and sometimes even fight each other while on them. it’s only the halway point of the film, or so, but it’s all downhill after that. the action isn’t very believable here, but at least it’s still fun. after this, we just get massive explosions, destruction, and machine gun fire, with little sensible reason for any of it. bruce willis is wasted here in a throw away part. my guess is he just wanted to be in a g.i. joe movie and also in a movie with the rock. willis also seems to be willing to do just about anything for a paycheck these days, between this and the awful fifth die hard film which should never have even been made.

the final portions of the movie are the worst of all. instead of a climax, we get a war room scene of characters launching nuclear weapons as easily as if they were playing a game of battle ship. i haven’t seen anything this stupid since jim carrey and tommy lee jones launched missiles in the water from their computers at the end of batman forever. g.i. joe retaliation really loses its way in the second half. maybe it’s not having channing tatum in that half of the movie, but i think it’s more about the movie refusing to hold back and try to go for any realism. it’s a real shame too, because this first half definitely had some potential. the movie is definitely better than the first g.i. joe film, but that’s hardly saying much, and both are definitely lousy movies.