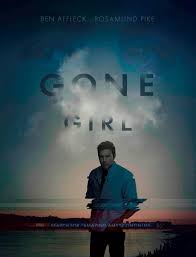 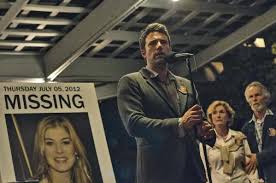 A fascinating thriller / mystery, this one is dark and disturbing, but it’s also incredibly interesting.

Gone Girl is a great powerhouse of a thriller film. That’s not to say that it’s perfect, because the movie is definitely too long, but like Prisoners from the previous year (also a lenghty thriller), this one digs deep into mystery and red herrings and a story that keeps evolving in major ways. Every new twist has you looking at things from a completely different angle and there is no lack of creativity here at all. The first half, for example, might seem somewhat routine, but it’s all just manipulation and setup, constantly raising questions about the protagonist. What was the level of his involvement in what happened to his wife? It’s in the second half, however, where the movie really comes becomes something clever and unique.

Gone Girl is a movie that hints at playing in familiar waters and then goes completely off the rails in ways that we have absolutely never seen before. This is a mystery about a missing wife who very well might have been murdered. In fact, the first half of the movie plays out like a murder mystery, and despite having seen countless versions of films in that genre before, this one is still completely entertaining.

Credit that to director david fincher, who is a master of the uncomfortable and creepy. he does murder mysteries in a way that no other director even attempts. Fincher finds a way to stylize it without making it glamorous. He does that by using specific yellow and orange lighting at night time (kind of the opposite of what Michael Bay used to do, using that lighting during the daytime.) With Fincher, however, it’s different, because aside from having incredible style and visuals, he is also a fantastic storyteller.

This director has tackled so many creepy thrillers and suspenseful crime-mysteries that he has really got the genre down. This is the man behind Seven and Fight Club, Panic Room and Zodiac. And he’s smart enough to stay in his genre. He’s veered out three times so far. When it was sci-fi (Alien 3, Benjamin Button) it was a mess. When it was realistic crime drama, (The Social Network,) he had great success. Fincher is now at the point in his career where he doesn’t attach himself to a project unless there’s something juicy about it, and with Gone Girl, that’s exactly what we get.

The first half of the movie is about setup and establishing the situation. While not as electric as the second half, there is still something pretty cool and creative going on here. The story is told both in the present and in flashback form at the same time. Now other movies have done this (The Prestige,) and they always do it through use of journal entries. But those movies always lean more towards on (either past or present) than the other. Usually it’s some present day establishment at the beginning and then the rest is mostly flashback. Only here, in Gone Girl, it really is an equal split. Two stories running parallel to each other, side by side.

From an audience perspective, this is really great. At first we start out thinking that Nick Dunne (Ben Affleck,) definitely did not kill his wife, Amy (Rosamund Pike.) this man seems to be handling everything right from the way he calls the police immediately to his wanting to cooperate and help them in any way he can. That is, until the strange photo moment where he smiles next to an enlarged poster of his missing wife. Other than that, however, this guy seems like he wants the case solved as much as anyone else.

And then, suddenly, all of that is called into question. The lead investigator on the case, Detective Boney, played by a great Kim Dickens, gives Nick every benefit of the doubt she can think of. That includes disagreeing with her partner (Patrick Fugit from Almost Famous), and believing the suspect is innocent until proven guilty. But then other things start to come to the surface, and the detective is right there to walk us through understanding what they mean. At this point we start to realize maybe we should be doubting Dunne’s innocence just s little bit more.

There’s a fantastic scene, for example, where Detective Boney takes Nick through his house, being honest with him about her suspicions and holding nothing back. She tells him what the detectives working the case noticed when they went into his kitchen for the first time. She explains how the blood on the floor was mopped up and how the photos were standing in a way that shows they were planted for effect. If there was really a struggle in the room, they would have instantly fallen down. Boney even demonstrates this by jumping in the room herself. This is pretty awesome stuff.

There is so much that comes out, even in the first half, that by the time the second half rolls around, we feel like we’ve been through nearly an entire movie. And that’s when the second half bites us in the neck with an incredible surprise that absolutely changes everything. This is when we realize exactly why Fincher took the movie on. All of a sudden everything exists in a world that we have not seen before. A twist of this magnitude is always saved for the very end of the film. movies tend to unleash this kind of twist on us, suddenly, and then fade to black. Queue the end credits. Only not this time.

Gone Girl continues on. It tells the story of the aftermath. The second half of this movie is a thing of marvel and astonishment. Its hard to say anymore without giving things away, but let’s just say that it’s like looking through a mirror at everything that happened before and now suddenly seeing it a different way. Aside from the Nick and Amy story, and getting a new perspective on what everything meant, there’s also the ongoing story of Nick defending hiring a top notch and very confident lawyer (played wonderfully by Tyler Perry.) There’s a great sequence of events that has nick and his lawyer prepping for an interview. Not long after that we get the realization that no amount of preparation could have gotten Nick ready for what was ahead.

Gone Girl is an incredible thriller. The first half might be the usual sort of thing, but it is still fascinating and intriguing, and that is entirely because of this director. It might be something we’ve seen before, but when Fincher tells it, somehow it feels kind of fresh. And then there’s the second half where things are absolutely out of control. The movie is really three different stories in one and that works for holding the audiences attention by switching back and forth between them. There are lots of flashbacks here, as we learn how they came to be a couple and how their marriage slowly fell apart. The movie does feel too long, but even still, the mystery angle is fascinating. The surprises completely blindside us in ways that keep us on the edges of our seats. This is a hell of a thrill ride.