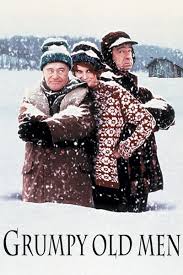 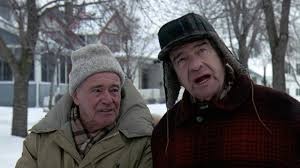 A  fun, silly movie about two old timers carrying out an ongoing fight that has lasted them most of their lives, and this time finding a new subject to quarrel over.

Grumpy old men are a nice, light-hearted, funny movie. It’s got Walter Matthau and Jack Lemmon as two old men who live next door to each other and trade insults like it’s a bodily function. Their pet nicknames for each other are moron and putts, but that’s just the start of it. These two guys play pranks on each other including fish in cars and snow on roves, and all sorts of other things. Early on we see an iris agent come to John’s (Lemmon’s) house looking to talk about back taxes. John opens the window to an upstairs bedroom on the side of the house, climbs out, and then jumps off the roof. Then he wanders over to Max’s house (Matthau), sneaking away from his own property. That’s the kind of movie this is. One where old men act like they are young, vibrant kids in the interest of getting what they want.

The movie does deal with death and old age, and that’s important, because it is realistic to whom these guys are and what they might really be going through. A friend of theirs, who also visits the new woman in town after hearing about her from John and Max, ends up passing away one morning. And John also has a near death experience where he can’t handle the snowstorm and finds himself lying in the road.

But for the most part this movie keep a light and fun energy about it. The central conflict comes when a new woman (Anne Margaret) moves into town and immediately gets both of their attention. This woman, Ariel, rides a snow mobile up and down the block at rapid speeds, making sharp turns and loud motor sounds. And John and Max each watch her from their bedroom windows, shocked by what they are seeing.

The next day the two of them both sit at their buddies’ coffee shop and trade insults about how neither one of them is going to do anything. They both think the new woman is hot, but neither one plans on doing much more than watching nor fantasizing. The friend, chuck (played by the great Ossie Davis,) just laughs at what fools they are as they talk about how the other one wouldn’t be able to get it up. He knows they are missing the bigger picture.

And so chuck is the first one to pay this new neighbor a visit. He’s not about to sit on his ass and wait the same way those other two are. And they both watch him from their windows, go over to Ariel’s house with flowers in his hand and get invited in. the next day, both men are over at chuck’s place first thing in the morning screaming for details. But of course chuck has no plans on abiding them. He wants them to get motivated themselves.

As it happens, Ariel is the one who makes the first move with those two neighbors. She rings John’s doorbell one night and invites herself in, looking to use his bathroom. He tries to direct her to using the downstairs guest bathroom, but she squeezes right by him and heads upstairs claiming that just using his master bathroom will tell her a lot of things about him. Turns out she knows that he and Max have been watching her and she’s tired of waiting around for one of them to make a move.

John hangs out with her one night and plans to go over and surprise her the night after that. Only Max gets there first. This back and forth goes on for a while until one day Ariel decides for herself who she wants and sleeps with one of the boys. Only things just get more complicated from there. The old friends start bringing up the past and giving each other guilt trips and suddenly they are turning Ariel down in ways that nobody ever expected.

There is also the storyline of John and Max’s kids, played by Darryl Hannah and Kevin Pollack. These are both nice people who used to have feelings for each other, but like their parents’ approach to Ariel, never did anything about it. Now Melanie (Hannah) is on the verge of a divorce and has a kid, and Jacob (Pollack) is running for an election in politics. The two fathers try to push them together, and a couple of obstacles, such as Melanie’s husband, tend to get in the way.

Grumpy old men have a fine plot. It isn’t anything special or extraordinary, and the ending seems a little rushed, but it’s not a movie where plot is the defining feature. Instead, comedy is what this movie is really all about. These two guys are adorable. The movie even has the creative sense to make John’s father still alive and to give him the energy to go out and do things, despite being in his nineties.

I like that this movie doesn’t treat old people like old age home people. It gives them youthful energy and an exciting story. The two men spend their days ice fishing in little wooden shacks on a lake and this leads to some fun situations as well, including a missing fishing pole and a snow plow pushing around one of the shacks right onto the lake. Matthau and Lemmon are terrific here; both playing very likable characters that just love to insult each other. The movie isn’t a great exercise in thinking or anything, but it is enjoyable and light and the kind of film where you can just sit back and have fun watching these two clowns whom, despite their age, never learned to grow up.