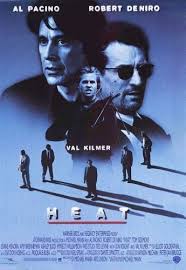 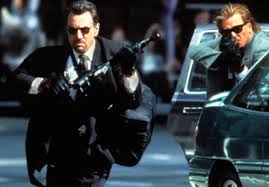 An intense and detailed heist thriller where the detectives and criminals get equal time on screen to navigate through this underworld.

Heat is a pretty incredible movie. It’s a film that feels epic and in many ways is, and yet the storyline takes place in about the course of only a week. It’s a movie that begs the question, what exactly is the criteria needed to make a film an epic? Taking place in a time period from the past definitely helps, and spanning long amounts of time, like whole decades, is another basic component. But what if a movie just covers every single angle of a world, including the wives and daughters of wives and home lives of a whole bunch of the characters involved? Epic might not be the right word, but it’s certainly something special, and that’s Heat.

This movie is unique because no other film would spend this time diving into the details of the world. The closest thing I can think of is L.A. Confidential, with so many layers to its mystery, and so many different characters involved in the corruption. But L.A. Confidential, great as it is, was strictly about the case. The whole movie was about this mystery. Heat is about the characters. That’s why we get to see and become a part of the home lives of each one of them

The basic storyline here is that there is a group of criminals who pull heists. They are a tight team and Always work together on jobs. Their leader is Neil McCauley, (Robert Deniro), and he is so cool and collected that you can tell right away just why these guys are willing to follow him anywhere. this team is good. They do everything to the second, using a stopwatch to know exactly how much time they have and where they need to be at each moment.

The movie opens with this team (which Also includes Val Kilmer, tom Sizemore, and Danny Trejo), pulling off a massive heist. They slam a giant truck into an armored car, knock the armored car over, and proceed to empty it out. They know exactly what they’re looking for and ignore the loose cash. And then they lay spikes on the ground to bust out the tires of any police who come. After that they drive away, and set their getaway ambulance on fire.

Al Pacino is the guy who leads the police team that comes after them. it’s a unit of major crimes, and his character, Vincent Hanna, is a remarkable talent. this guy understands the way criminals think, and exactly what he needs to do to catch them. Hanna has been through three different marriages because he’s at the job more often than he’s at home, and is completely determined to catch his man. Pacino has a lot of fun with the role, playing a guy who is clearly a little crazy. His character sits down and starts shouting things at free will, and everybody around him responds because they know he’s a mad genius.

Al Pacino and Robert Deniro are both legends of crime movies. Both guys came up in the seventies and really got made by The Godfather films. Only in those movies, they never actually worked together. Deniro (in the second film) was playing a young version of the Marlon Brando character, which had dealings with Pacino in the first movie. Well, with Heat, for the first time, the two guys get to actually have scenes together. And director Michael Mann knows how special that is, and doesn’t waste a single moment of it.

Mann gives these guys some wonderful scenes to play against each other. The scene at the coffee shop is an absolute classic with both guys recognizing that they like the other and appreciate the style and guts that the other one has. At the same time as doing all that, these guys Also make threats to what will happen if the other one doesn’t Change his path. The dialogue throughout this movie is pretty great, with characters really knowing what they’re doing around this business, and in the coffee shop scene, it is absolutely handled with perfection. These are wonderful characters. Both McCauley and Hanna are absolutely the best in the game.

But Heat is about so much more than just the rivalry between these two guys. It’s about whole teams and even involves a sort of mystery itself, where one character on Neil’s team ends up dead and the other members have to piece together what happened. Aside from Hanna and the cops that are coming after them, Neil and his boys Also have to deal with a guy named Waingrow, who joined them for one job, proved to be a loose cannon psychopath, and is now their number one enemy. Then they’ve Also got the businessman, Van Zandt, after them for ripping him off.

With all of the plot intricacies this movie has going for it (there’s even a large subplot involving Val Kilmer’s wife and the guy she’s seeing), it’s amazing that the film is able to make time for lengthy and exciting action scenes. The bank robbery turned street shootout sequence has got to be one of the greatest shootout scenes in cinematic history. Every details of it is worked out, including how something like this could really go down.

Heat is an amazing movie. It is beautifully filmed and designed. The music is pitch perfect. Every great scene has the most inspired music playing right Along with it, from the bank robbery with the quick beats in the background to one of my favorite moments, when Hanna figures out what Neil and his team were looking at in an open area. This is a very smart film and despite it’s length, it is just so much fun. A movie like this would never get made today, at least not in the same way, and that’s kind of sad. We don’t have the attention span for something like this anymore. All of the subplots about family members, including Ashley Judd and Natalie Portman, would have been cut out of the movie. That would have been quite a different film and nowhere near as interesting. Today, the heist movies we get that are worthwhile are more like a town. That is today, they are great, lively, and well written, but there is no mystery anymore. It’s all what you see is what you get. Heat comes from a time when artists could still tell lengthy big stories on the screen and do it by taking it’s time and getting the details right. If that’s not epic, then I don’t know what is.