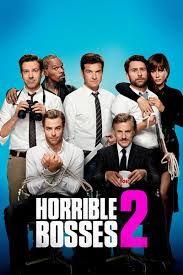 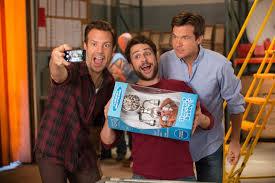 Not very good simply because it’s not very funny, this movie recycles of the characters of the original, but something is definitely missing this time around.

This movie just doesn’t have what the first one did. Granted the first movie definitely felt like it got lucky. Jason Sudekis is not a strong comedic actor (Just watch Hall Pass or We’re The Millers), and his two costars (Jason Bateman and Charlie Day) were able to portray the same kinds of characters they do so well on TV (Arrested Development and It’s Always Sunny In Philadelphia,) that Sudekis was easy to ignore. Not so in this second film. Similarly the bosses did work in the first movie, with Colin Farrell being the standout. This time there is no Farrell and the other two are back, but are basically just doing impressions of themselves from the first movie. The plot is just okay, but the real problem is that the humor is weak. Two of the three leads are idiots, and somehow this movie was able to use that and pull it off. In this film it just feels incredibly annoying. There’s only so many times you can watch Jason Bateman get frustrated with how dumb his friends are. If the humor found the right tone or if more effort was put into coming up with funny scenes, this movie could have worked. Instead, we get the one scene with the most physical effort in the very beginning (the shower scene), and after that, the movie never tries that hard again. Instead, it seems like everyone is just there phoning it in, not caring and not really trying very hard either.

Horrible Bosses 2 is a movie that really shouldn’t have been made. At least not with this plot and lack of original ideas. Like the Hangover 2, this one in many ways feels cookie cutter to the first film. Now, it’s great that so much of the cast is back, but something is definitely missing. For starters, it should be noted that it’s almost a fluke that the first movie even worked at all. The premise was never anything great, and the characters were certainly not very deep. Two of the three main guys are idiots and the third guy is just the straight man.

But it did work, as a movie that got funnier and funnier each time you viewed it. And a lot of credit for that goes to the side players. Jamie Foxx was great, taking a chance with some of the references he dropped and how they played out. Colin Farrell was absolutely dynamite. This guy is never as good as when he acts in comedies. Just look at In Bruges or Seven Psychopaths for proof of that. But Farrell is not in this movie, and the other returning playes (Aniston, Spacey, Foxx) are only in the film briefly.

The premise is not identical to the first film (so not as bad as the way it was with the Hangover sequel), but it’s still pretty lousy. Instead of murdering, this time they are kidnapping. Instead of working for bosses, this time they are inventing their own product and trying to be the bosses themselves. The movie opens with the daytime talk show where they are presenting the product on the air. It’s called The Shower Buddy and it’s a shower head that contains both the shampoo and conditioner. You just hit a button and it drops those things right down onto your head.

The opening talk show scene is actually one of, if not the, funniest scenes in the movie. First there’s the idea of these guys yelling at each other on the air about the name of the product. That part is just okay, although it’s always great to hear Charlie Day lose his temper and start yelling. But then there’s the physical comedy, where we look at silhouettes of these guys while they mimic taking a shower, and Charlie Day (Dale) fixing the shower at the same time as Kurt (Jason Sudekis) is taking one, ends up looking like Day is really giving it to him. The result is pretty humorous. But then there’s nothing else like this in the entire film. No more physical comedy at all.

Instead, this movie becomes about story alone. Sure it makes many attempts at humor, but all of them really consist of the guys arguing about things until Bateman (Nick) shuts them up. That formula wasn’t great in the first movie, but it was okay. Here it is just annoying and tiring. The guys meet with an investor who is interested in their product. This is Rex (Chris Pine), and he’s playing the big shot, in his father’s office, throwing out money offers. The boys decide to go it on their own instead.

That’s when the real owner of the office and company walks in. This is Bert Hanson (Christoph Waltz). As an actor, Waltz is hit and miss. He’s great when he works with Tarantino (he’s two for two winning oscars for his roles in both Inglorious Basterds and Django Unchained), but he’s pretty lousy everywhere else. Witness his attempt at comedy in the Seth Rogen superhero movie The Green Hornet. He’s pretty similar to that here. Waltz just isn’t funny. As far as the story, he gives the guys the information for his production company, tells them to make about ten thousand units of their product, and that he will buy them and sell them.

Only Bert is lying through his teeth. The boys find that out when they go to visit him on a golf course, and not only does Bert tell them that he won’t be buying the product, but he also tells them about his own version, known as the Shower Pal. He is ripping their idea off. Now, why in the world would he tell them that. I get that he doesn’t really care if they know, and isn’t afraid of them, but even still. The first movie worked because it took it’s time. No ideas were rushed in any way. That’s how we got the “Wet Work” scene, the guy from Lehman Brothers telling them about his work situation while they were at the bar, and the scene with the bartender (The guy from The Wire and The Walking Dead), who was in no mood to listen to them, before they found Mother F’er Jones.

Here, it’s the exact opposite. Everything is rushed. The only scenes that feel additional are the ones where these guys go to visit the old members from the previous films. There’s a scene where they go to see Kevin Spacey in prison, for example, and the whole purpose of the scene is just to bring back Spacey’s character. Nothing else comes of the scene at all, not even any humor. The only thing I liked about it is that Spacey knows each character for something else. There’s Nick, who worked for him. The guy who slept with his wife (Kurt), and the guy who saved his life (Dale.) But all of that is call back material from the first film.

This movie really tries to copy the first film in lots of other ways. The movie references from Mother F’er Jones are forced and don’t feel natural or memorable at all. The same goes for his negotiating tactics. We got it in the first movie. If nothing is going to change about the joke at all, then what’s the point? Even Jennifer Aniston, doing her thing, is not that great this time, because we’ve already seen it all. What they really should have done was have a different character fill that role. A different sexy character who was hitting on one of the guys, or who one of the guys was hitting on. Just something to keep it fresh.

What this movie does add into the mix is Chris Pine. He might be the only thing that actually works about the film. Whether it’s him having fun with the guys by popping up in their trunk where he actually kidnapped himself, asking Dale to move over in the back seat of the car (from the middle spot), just for him to take the guy’s spot, or the way he treats his maid, it’s all pretty funny. Rex is by far the best character in this movie. He’s the only one who actually seems like he’s trying. The other guys are all just relying on exactly what they did in the other film, with no interest in adding anything new to the mix. The story is pretty weak, but it’s the lack of humor that is really disappointing.